There is a saying in racing that goes something like this “worry about the ounces and the pounds take care of themselves”, and Think Technology seems to live by this saying in everything they do. Think sent us replacement “lite” seat foam as well as a “lite” seat cover to go with the long term 2018 Honda CRF250R that I have had for some time now and I thought they forgot to put the foam in the box when UPS dropped it off (I’m not kidding, it’s that damn light!). I never really thought about seat foam and covers being a factor when it comes to the overall weight of a 200+ pound motorcycle, but when I felt compared foams, side by side, I was rather impressed. I honestly didn’t weigh them side by side since the scales I have don’t register that low, but I can tell you that the feeling in your hand is impressive and the claimed difference Think Technology says is close to one pound! I believe it, because it actually feels more than a pound on my human hand scale. 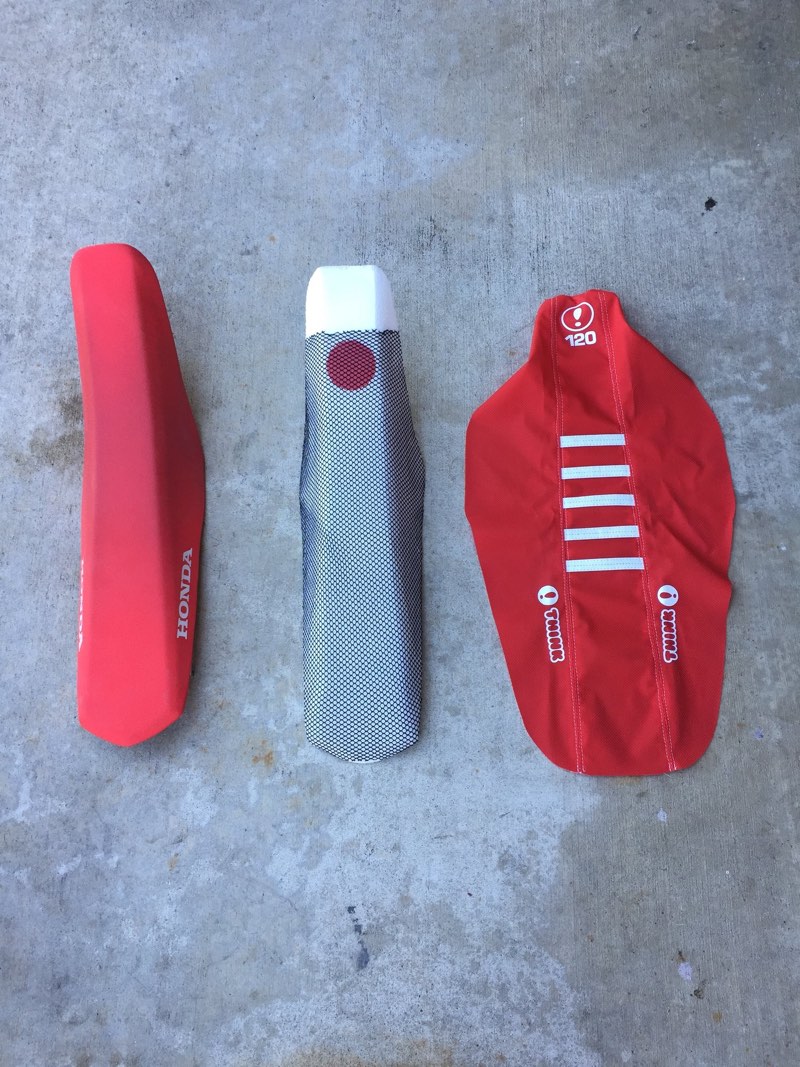 When I took off the original seat cover and foam I initially noticed the stock foam was still slightly wet from the recent washing a couple days before. The second thing I realized was that the stock foam not only goes on top of the seat pan, but the side overlaps and slightly goes around and under the stock seat pan. After all the stock parts were removed and I went to put the new foam on I realized that the foam no longer wrapped around the side and under the seat pan, which didn’t seem like a big deal at the time. The foam fit nicely on top of the pan and the new cover wrapped around the foam nice and tight with plenty of material left over on the bottom to staple.

The new cover has a cool look to it with the custom “120” Think put on the front of the cover making it custom for Kris (I’m not fast enough to have my own number). Installing the seat on the bike was almost easier than the stock one, but there is a reason for that. Remember how I said the new foam didn’t wrap around the bottom of the seat pan? Well, that now created a small gap all the way around the seat between the seat and the plastics, so much so that you can see daylight between the seat and the gas tank. This gap also left the seat pan a little loose on the side of the gas tank and lets the seat rattle slightly more than stock. However, where the seat hooks to the tank isn’t wedged tight, you really don’t notice it when riding, you notice more in the pits riding out to the track. That being said, those are the only negative things about the performance of the Think Technology seat foam. On the track those couple negatives go away when you feel the nice firm seat foam, not hard, but firm which never broke down at all, as well as the grippers sewn into the cover that really keep you in place on the seat. In addition to customizing the seat with your number (if you’re fast enough to have a number) Think Technology will also put a seat bump in your specified location for an extra $40.

After putting many hours on the Think foam and cover I’m impressed with the holdup of the product, the cover has only slightly lost its bright red look due to all the dirt and the foam hasn’t broken down or got water logged after further inspection. I did not notice a weight difference on the track, but maybe Kris can feel that kind of stuff more than me. The other cool feature of the Think foam is that it’s a closed cell foam (which comes from the aerospace industry), this means during washes it won’t absorb or retain water, which is good for two reasons; one it will not retain the water which makes it heavy, and two it will not stay water logged and ruin the foam like stock seat foam can do. Now to the part that will scare a lot of you away, the price of the Think foam is $299.99 (plus $40.00 if you want a bump) and the cover is $59.99. I know this is a lot of money (anything related to aerospace isn’t going to be cheap), but if you are into saving every ounce (as some of you crazy weight biased people are) as well as not having to sit on a water logged seat ever again, I’d definitely look into Think Technology. -Michael Allen

I have used the Think Technology foam on other machines like a Yamaha YZ450F and have come to the same conclusion as Michael. I like the firmness of the seat and the fact it hasn’t got heavier over repeated washes (over the course of a year). As you know I ride a lot, so I wash my bike a crap ton as well and it hasn’t broken down. I have heard through some grumblings that the foam shrinks up over time, but I haven’t seen this happen yet. Like I said, I have had mine on the Yamaha over a year now and all is well. This is a niche product, but I like testing these niche pieces because its not the norm. It’s expensive, yes, but it’s up to you to decide if it’s worth the money. It’s a good product, but to me gives you no real advantage on the track. The advantage is the lifespan and weight consistency of the foam. -Kris Keefer