Before I start speaking about this review, I want to make it clear that I do not believe in witchcraft or voodoo. I was raised that only hard work and dedication were the formulas to success. There were no shortcuts in life, just like there are no shortcuts in getting better on a dirt bike or getting in shape. Sweat, effort, consistency and a lot of riding is how you get faster and more fitness for this dirt bike thing. I was reluctant to try MindFX because I thought this was another snake oil pitch by some guy trying to make a buck. If I wanted to drink something in between motos, I would just drink some good old fashion H2O and maybe a gatorade to get some sugar in me. However, when I tried MindFX Performance Pro for the first time I felt something a little different with my body during a 30 minute moto. Before I get to what I felt like after I used MindFX Performance Pro, let me tell you what it is all about. 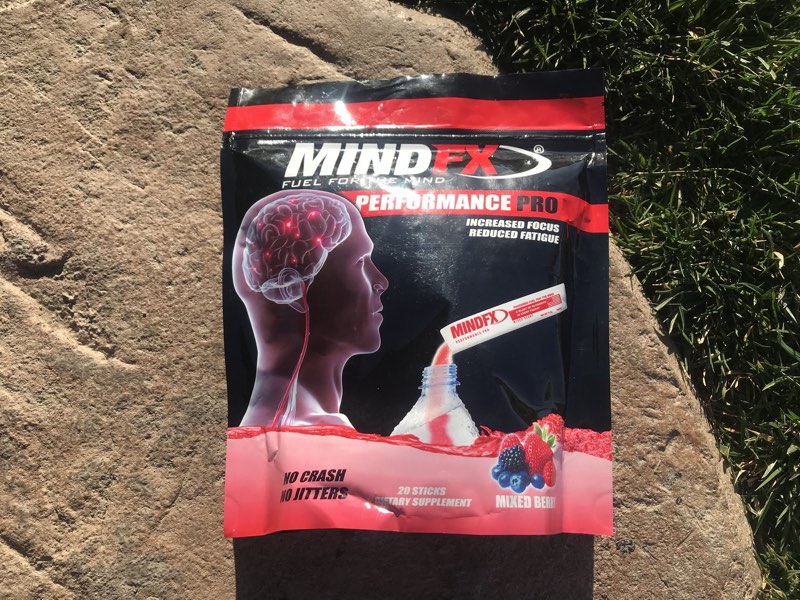 MindFX Science was created by Kevin McCarthy as a healthy alternative to the highly caffeinated energy drinks that some of us grew up on, pre-workouts mixes and even some ADHD drugs. MindFX claims to achieve this result naturally via the use of adaptogenic herbs, strategic use of vitamins, minerals and natural flavoring.

– Rhodiola, our adaptogen, increases vitality and immunity and reduces fatigue and exhaustion in prolonged stressful situations.

– Organic Beet Powder helps with oxygen uptake due to the high nitrate content.

– Vitamin B12 helps support the body’s ATP production, the energy our cells run on.

– Theobromine used to relax the bronchial muscles in the lungs, which increases oxygen flow to the brain. In addition to its stimulant properties, theobromine

– Caffeine (low 75mg) as a natural stimulant has been associated with positive effects on the brain and an array of health benefits.

MindFX original formula was developed for competitive athletes and designed to be a blend of all natural neuronutrients that increase focus and concentration.

MindFX Performance Pro was developed with some of the most fittest athletes on the planet that required additional nutrients like Vitamin C and electrolytes to help sustain mental focus and reduce fatigue.

So now that you have the gist of what this product is, how did it work on me? I ride, test, type, talk and train all throughout the week. That is my program. I don’t drink alcohol, I don’t party, I am actually quite boring, just ask my wife! I just like to ride! Sometimes I have to do some durability tests that involve a crap ton of motos per day and that sometimes happens three to four times per week! Again, like I said, I ride a lot! So I thought what the hell? Ill try this stuff out. I am the kind of guy who will have 90 calorie Coca-Cola after a long day of riding now and again, but otherwise that is the only super sugary thing I drink within my diet. I used one packet of MindFX Performance Pro and mixed it in a 16 ounce bottle of water and downed it after my first 20 minute moto. On this particular day I had to do five 20 minute sessions and I could feel a little more spunk and focus rolling into the next few motos that I did. Now I thought to myself,  “this must be a placebo effect right”? I tried another packet of MindFX on the very next test day and felt the same thing. It’s not like I gained superhuman strength and it lowered my heart rate, but I did feel like I could focus on my line choices better when I was pushing. The most important thing that MindFX DIDN’T DO was give me a sugar high/caffeine crash. I was waiting for the lull in my performance enhancement after a couple hours, but it never really came. Again, I really want to stress that this isn’t a cure all for fatigue, but it does help me get over the hump on long strenuous days of riding. I like my cup of coffee in the morning and that gets me bump started for the day. I look at MindFX as my “coffee” bump when I go ride now. The directions say not to take more than three packets per day and the most I have taken was two packets in one day. One when I was testing and one when I got home, before I headed on my mountain bike ride.

I am happy to purchase products that work for me and MindFX Performance Pro works for me. A packet of 20 sticks is $29.95 and it comes in two flavors (Mixed Berry and Orange Mango).  My favorite flavor is mixed berry as it doesn’t have a harsh taste to it. Orange mango tastes decent, but mixed berry is just a better flavor for me. It is easy to down/digest and not something you will make a bitter beer face, after you taste it. MindFX makes another blend for the non-athlete and it is called “Performance”. You can do your own research and check it out for yourself over at mind-fx.com.

If you have any questions about this test please feel free to email me at kris@keeferinctesting.com.