I purchased a 2016 Oset 20.0 48v electric trials bike two years ago for Aden (my son) to hone his skills on around the house. Little did I know how much fun one of these suckers would be, not only for him, but for me as well. In those two years the Oset 20.0 has been a mainstay in our backyard, at local motocross tracks and the occasional desert trail ride. Plus, haven’t you ever just wanted to ride right out of your garage or build a makeshift course in your backyard? Well, Oset bikes has made this possible without getting bitchy, non-friendly dirt bike people in an uproar. The version we have is the 2016 Oset 20.0 48v Racing Electric Trials Bike that was originally  designed for 8-12 year old’s (but that didn’t stop me from trying it out, even if I am 25-30 years older). It is powered by 48v battery system (four 12 volt batteries) that has lasted us up to 2.5 hours per ride time, depending on size of rider and how it is ridden. The Oset 20.0 bike comes with a 48v wall charger that takes up to four hours to charge when unit is fully drained. Yes, that is the downside to this machine! The charge times!! 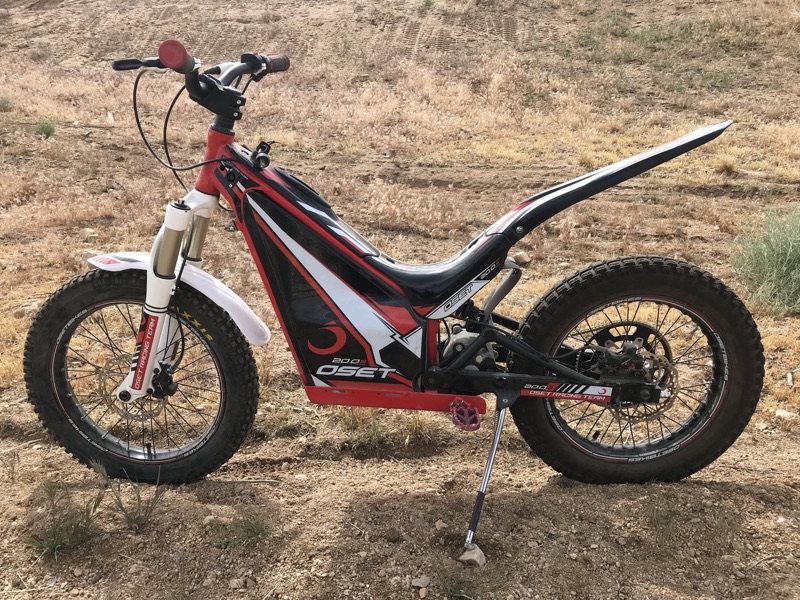 Our older 2016 model came with three fully adjustable power settings (speed, power, and response). Each setting can be adjusted via a knob near the front of the machine. What I have learned is that “speed” is the overall top speed the Oset 20.0 will go, “power” is much like a torque adjustment similar to bottom end on a gas powered machine and “response” is how quick you want the throttle to hit (or delay) when accelerating (similar to rpm response on a gas powered machine). For those in the target age range, the Oset 20.0 is a machine, which is a lot of fun, provides incredible opportunities for gaining skills and the bike can be ridden in any park or backyard – without upsetting grandma and grandpa next door. The Oset 20.0 machine is configured with front and rear disc brakes controlled by hand levers, like a mountain bike, a twist throttle like a motorcycle and the direct-drive electric motor means there’s no transmission, so no shift lever or clutch.

My now 12 year old son Aden Keefer has been riding an Oset machine since he was six years old. His first was a 12.5 version that lasted him until he was almost nine years old. The only problem we ever had with the 12.5 was when he would crash, break the throttle housing and of course the occasional flat tires. Don’t fear though as Oset Bikes has a US office based out of Montrose, Colorado and has plenty of replacement parts in stock and ready to purchase. The highlight of Aden’s childhood has been riding in his backyard after school with his buddies and building obstacles to get over cleanly. Good clean fun!