Neck braces…This is a tough topic in the world of motocross right? Neck braces are almost like a form of religion. You have a bunch of people preaching to you on how they believe in what “they” (neck braces) can provide for you, but it’s something that is up to you to fully believe in. Or maybe it’s something that you choose not to believe in at all? I can tell you that I was somewhere in the middle between those two. It wasn’t that I didn’t “believe” in the technology as much as it was more of a comfort thing for me when I rode with one. I felt too restricted with a neck brace on and it hindered my technique on the bike. I felt like a robot, that was so stiff on the bike, that I immediately was an anti neck brace guy! Fast forward five years and I got pressured to try an Atlas Air neck brace again by my good friend Steve. I warned him beforehand that having me test a product that I didn’t care for several years ago could be dangerous as I am a no bullshit kind of guy when it comes to evaluating products. Steve agreed and now here we are typing out this evaluation. However, sometimes getting pressured can be a good thing and in this case it was good, because as a test rider I needed to have an open mind to products that may or may not have been “acceptable” several years ago. Why? Because just like dirt bikes, products can evolve and get better over time. Well to my surprise the Atlas Air neck brace did just that, it evolved and got better. 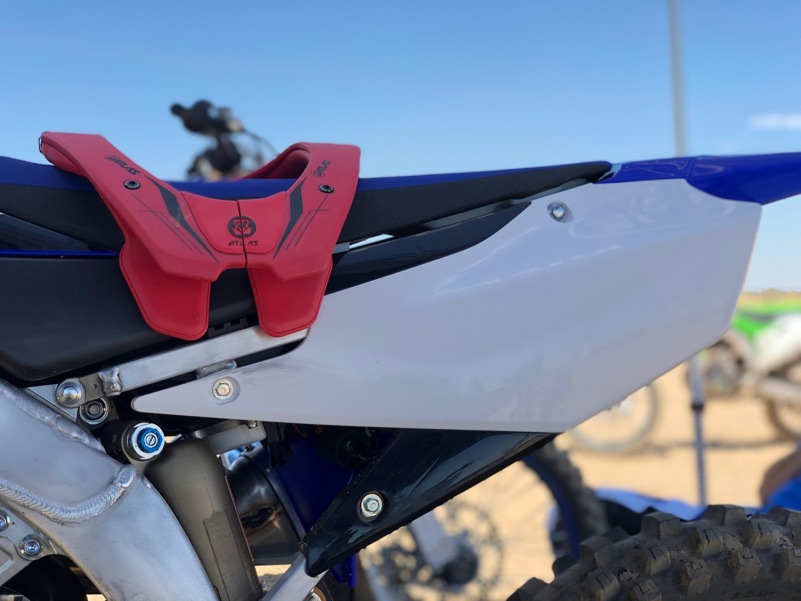 Before I get into the meat and potatoes of why the Atlas Air is a better neck brace, what exactly is the technology behind this product? The Atlas Air is made up of a flexible polymer construction that is tough and impact resistant that is ideal for multiple impacts. The flexible nature of the material is designed to slow down violent impacts in an effort to spread out and reduce impact forces, rather than coming to an abrupt stop.The Split-Flex Frame design allows the rear of the brace to mimic the natural movements of your shoulders to provide maximum comfort and mobility (in dirt bike riding terms, that means while riding you’re almost able to not feel like you’re wearing anything). Each Atlas Neck Brace sits around your spine and sternum, transferring impact forces to the bigger muscle groups rather than directly on the spine and sternum, while increasing surface area contact with the body to dissipate forces more efficiently. Chest suspension keeps the head in motion during a longer period of the impact, while promoting tuck-and-roll ability during an accident (If you know Ryan Hughes rants, this is something he thought neck braces lacked). Unique leaf spring style design provides 30mm of chest suspension to help slow down and reduce impact forces. Each chest support can operate independently, allowing impact forces to be absorbed strategically and effectively. Each Atlas Brace is the smallest overall size compared to the competition, but is claimed to contact your body 27% more than the competition, making it smaller, and bigger if that makes sense? The increased surface area contacts the body to help spread out impact forces, with the intent of making their effects less noticeable and/or helping to potentially prevent secondary injuries. Previously Atlas used rear tethers that used an internal braided steel cable for strength. Now, after three years of development Atlas has now gone wireless! The new tethers use a specifically formulated rubber compound co-molded to custom machined aluminum axle nuts. This unique rubber compound provides more strength and longevity, that withstand a ton of cycle testing. Each Atlas Air neck brace features two height adjustments. Tall pads are included in the box and make fit easier for longer necks, smaller helmets, and/or other needs. I tried on several helmets (6D, Arai, Shoei, Fox, Fly, Bell) and all gave me the same amount of head movement/mobility. Aluminum Smart Mounts on the back of each Atlas Brace provides the rider six possible settings to find tune the fit around your chest and back. The reversible design can move the back supports forward or back, and an internal spline system provides a -10, neutral, or +10 degree micro adjustment to fit various body shapes as well. 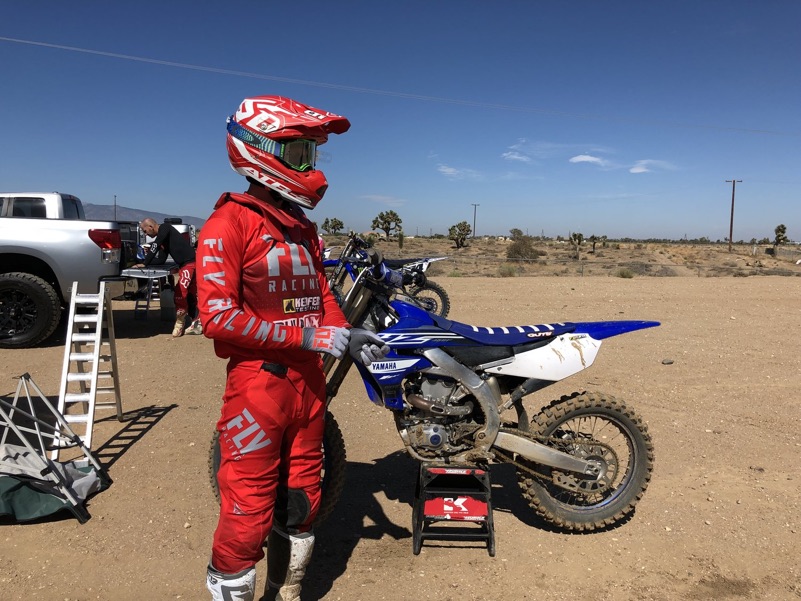 Now let me start off by saying that it’s up to you whether you believe in neck brace technology or not. I am not a preacher and can’t force you to believe in a certain technology, but I can give you facts on what it’s like to ride with the Atlas on for several, long test days. After studying/reading all about the old technology versus the new technology, I can say that I “believe” that there are some safety advantages to wearing a neck brace. I had the Atlas Air fitted up with the help of Canadian legends Brady Sheren and Ryan “The Newf” Lockhart and they gave me a brief tutorial on the Atlas Air. After the tutorial I was off to ride my first moto with the neck brace on. One important piece of technology (that I really like) that has evolved on the new Atlas Air neck brace is the material consistency and how flexible it is. The older neck braces weren’t nearly as flexible and that was a big red flag for me, especially in a crash. You can bend each end of the Atlas Air neck brace and it snaps back to the original shape much easier than older models I have ridden with. Another complaint I had with older neck braces is that I couldn’t look far enough ahead of me without feeling restricted. The Atlas Air gives me enough freedom that I didn’t really notice it was on. Impressive! The only part that made me think that I had a neck brace on was that the straps (that hold the neck brace down) rubbed me a little under my jersey. I tried not wearing the straps, but the Atlas neck brace moved around on me too much when I rode. I tried the “X” strap that they also offer, but that was too much strap against my skin. Another option is to wear the strap over your jersey, which I refuse to do because of looks. The Atlas Air is also very lightweight feeling at 580 grams and that feels like nothing when motoing down. I had zero complaints with my neck mobility while riding, but you will notice the chin bar of your helmet will hit the front of the neck brace while your BS’ing with your buddies in the pits. This isn’t really noticeable while riding, but it’s something that I felt when at a standstill. Each contact point of the Atlas Air is soft against your body and not at one moment did I feel an uncomfortable feeling. 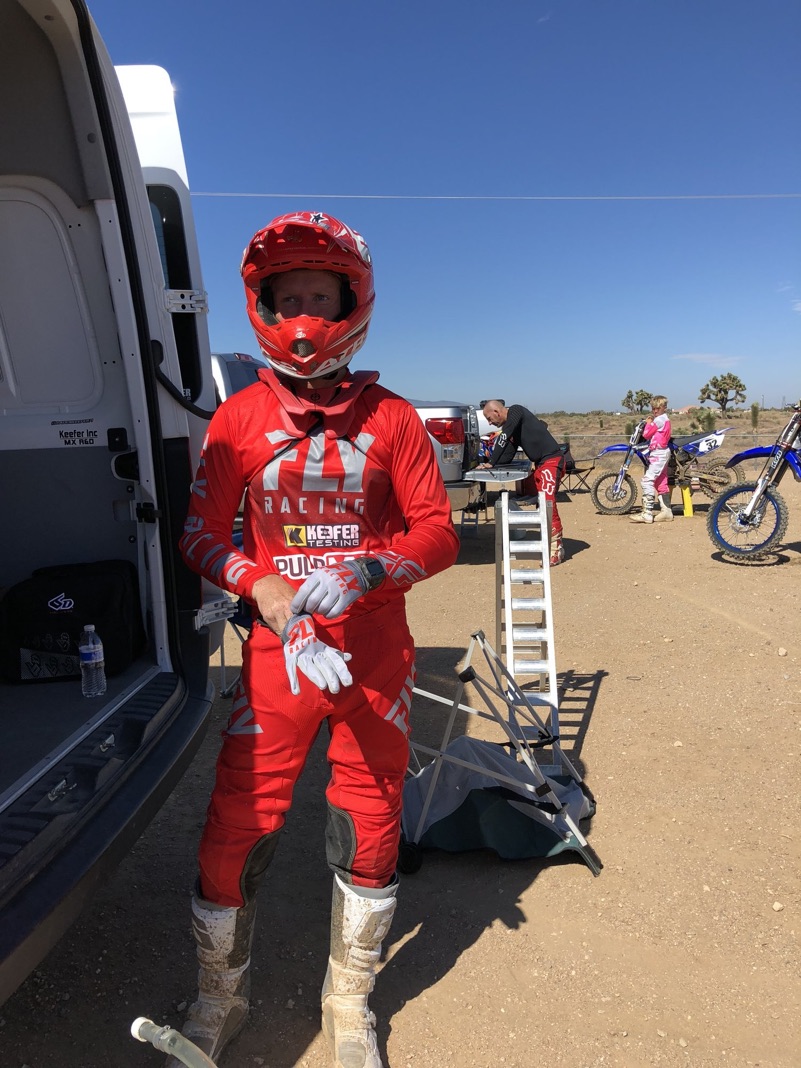 If you are a chest protector wearing rider don’t fret because the Atlas Air does comply with a number of different chest protectors. At my disposal was a Fly Revel, Alpinestars A1, A4, Thor Sentinel, Fox Titan, Pro-Frame, and even an old HRP Flak Jak! Yes, I still have one of those! I did prefer wearing the Atlas Air with a lightweight roost deflector versus a full chest pro because I felt less bulky and could move around on the bike better. However, this is more of a chest protector feeling than a neck brace issue.

So if you haven’t worn a neck brace in a while and are “on the fence” about wearing one, like I was, give it a try because you’ll be shocked on how comfortable the Atlas Air actually is. I was so impressed by how comfortable it was that I have decided to do a full neck brace shootout, come this winter, to see if the others are as good as this Atlas Air. 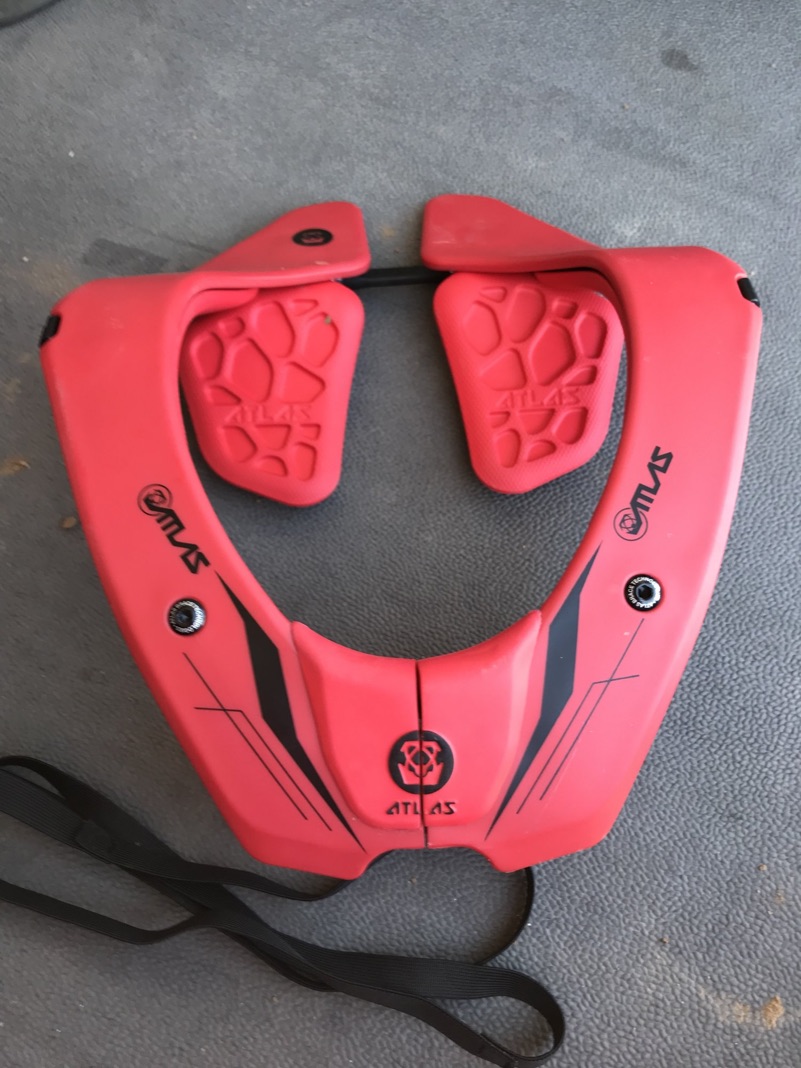 Since I am no BS kind of dude and I can almost guarantee you’re reading this asking yourself “yeah, but will he wear a neck brace now that he can actually stand to wear one”? My honest answer to you is that I am going to “try”. I have been wired one way for so long (on safety equipment) that I am going to really give it a conscious effort to start wearing the Atlas Air neck brace more when I ride. It doesn’t bother me when I ride and I am going to educate myself more on neck brace technology for future tests, so why not wear one? The lack of comfort is not stopping me anymore, so I am going to give it a go. Will I wear it 100% of the time? Probably not, but if I start to wear it more and the technology becomes something that I “believe” in fully you will see me at the track with it on. Until then all I can do is tell you that if you do believe in neck brace technology, the Atlas Air neck brace is the best neck brace I have tried to date. The cost of the Atlas Air is $329.99, comes in three sizes, and six different colorways. You can check the complete line of Atlas neck braces over at atlasbrace.com.