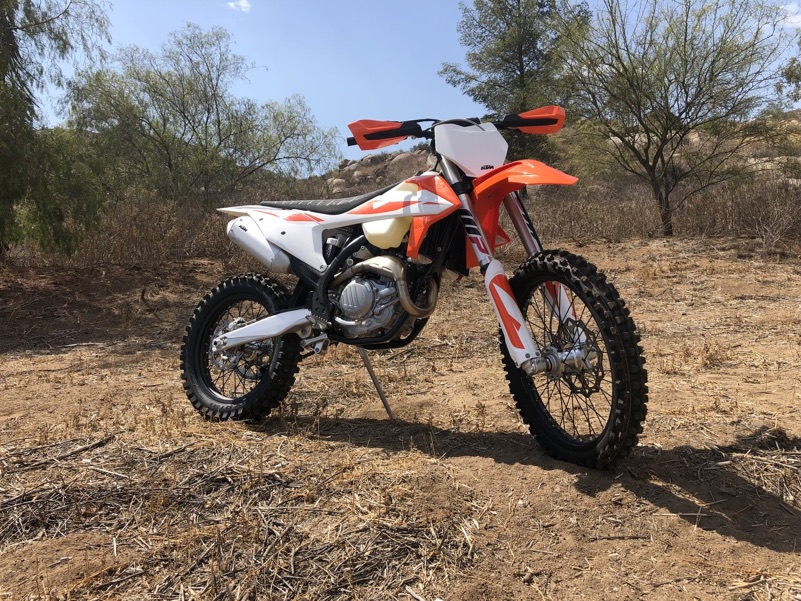 Take a look at any major off-road racing series right now and you will see that the majority of them will have at least one KTM up front. This is no coincidence because KTM has been working diligently to prove themselves as the premier brand that sells bikes “Ready To Race” over the last several years. The KTM 450 XC-F seems to be a popular pick when it comes to winning races and even for that weekend warrior type of rider. Being an off-road guy I was excited to finally get off of the moto track and on to the trails. Although some of the parts have stayed the same on the 450XC-F, a lot has changed for the 2019 model, including the engine, which has been put on a diet and now only weighs 59.5 pounds. Also in the engine department is a new SOHC cylinder head, new cam with updated cam timing and a new cam chain guide with DLC coating for less friction. The on-the-fly map selections have been updated, along with the ever so important traction control that you can actually feel on the trail. The chassis dimensions have stayed the same for 2019, but the chassis is now made of a high tech, lightweight, chrome-moly steel, including hydro-formed parts to help improve chassis stiffness. Included with the new frame material are brackets that are pre-welded on the frame for mounting a KTM Power Parts skid plate (more on that later). The sub-frame has been extended under the fender by 40mm to help with rear body work strength. The seat and bodywork also have been changed for 2019 giving the bike a slimmer look and feel. The swingarm slot has been made slightly longer to give more adjustability to the rider if they want a longer wheelbase for certain tracks. The headpipe on the 2019 450 XC-F now has an FDH resonator system for improved performance along with a new muffler that has a screen inset. The suspension settings have been updated for 2019 and the bike is still fitted with the AER 48mm fork.

Now that you know about the changes to the 2019 KTM 450 XC-F here’s how all that correlated when I hit the dirt: For starters the trail conditions in Southern California have been less than ideal lately between the dust and heat, but I’m always up for some trail riding. Once running, the KTM 450 XC-F has a throaty sound to it, not raspy or loud, just a solid tone that made me excited to see what this engine was all about. Off the bottom, the roll on power is a bit deceiving to the riders and surprising. What I mean by this is that it seems a bit soft like it’s lacking bottom end torque. BUT…… After putting more time on the bike, I don’t think my original testing diagnosis was correct. Although other 450 off-road bikes may have more excitement or bark down low, this KTM seems a bit more linear/refined. The low end feel is connected to my throttle hand, which provides maximum traction to the rear wheel. This sensation makes it feel like its lacking bottom end, but in reality it’s just very smooth and linear from bottom to mid. The only time I really wanted more bottom end torque was when I was being a bit lazy, riding a gear too high and trying to lug the bike too much. The KTM never fell on its face, it just didn’t have the snap off the bottom (throttle response) that other red or blue bikes (in the same category) have. From mid to top is where this bike really seems to shine and makes me smile under my helmet. Unlike a lot of other 450 machines, this KTM doesn’t mind being revved more. After the smooth bottom end this bike comes alive and seems to make consistent pulling power all the way to the rev limiter. First gear is a bit tall for my liking, but it wasn’t the end of the world because the smooth bottom end power never made the bike bog (or have a dirty FI setting feel) when I was lugging it at low speeds. I’d also like to add how much I like the clutch feel and engagement, as there is a consistent engagement and a buttery feel that I’ve come to love with this Brembo hydraulic clutch.

Being able to use the map selector switch on-the-fly is a nice feature because you never know when you’re going to come upon a technical section and want to soften the power delivery. Map one is the softer map and has a smoother power delivery from bottom to top. Map two is the aggressive map and takes away some of the smooth bottom, ramping the power up quickly and giving the bike more of a free revving power characteristic. One thing I did notice was that map one lights up white and map two lights up green, but when map two is lit up, it illuminates map one in green as well. Traction control on a dirt bike is still a foreign thing to this old soul, but in the slippery dry California desert it was a welcomed sight. Don’t think of it as traction control for a car where it cuts 50% of the power and 100% of the fun. Think of it as more of a little traction fairy that watches over the rear wheel and doesn’t let it spin quite as much as it would without traction control. (Editor’s Note: I guess this “traction fairy” is much like your designated driver at a party where he or she lets you have a good time, doesn’t suck the fun out of the room, but at the end of the night you end up getting home safe. That’s how I take this, right?) Where I found it most helpful is on slick faster trails where the KTM’s rear wheel really wants to come around when you get too much wheel spin. The TC makes riding more aggressively in these situations much easier on the rider.

When it comes to the chassis it’s clear that this bike was designed for high speed racing over rough terrain. The faster I rode the better the handling characteristic’s seemed to get no matter the terrain. When I tried to slowly trail ride the bike I felt like there was a lack of front end traction and the front end had a slight push. However once I started to ride at more of a race pace and weighting the front tire more (my race pace, not Taylor Robert or Kailub Russell) the front end started tracking more consistently as well as gave me more confidence. I will admit I’m not a fan of air forks, but it’s clear that KTM has the best air fork on the market and is slowly starting to win me over. My main gripe with any air fork for that matter is just that I’m a bit lazy and I don’t want to deal with having to check my fork pressure before heading down the trail. Other than that the AER fork has a comfortable feeling on the trail especially when the speeds are higher and the bumps get bigger (this fork has superb bottoming resistance). The front end had a tendency to get some deflection in slow rockier sections, but it wasn’t so bad that it was a huge problem. This was just noticeable because I have tested other heavier, spring fork equipped off-road machines. The rear of the bike felt planted in almost all conditions and just like the front has excellent bottoming resistance. Overall the suspension has a fast feel to it, but I like that feeling as it helps make the bike feel lighter and more nimble on the trail.

Being that this bike was created to be an out of the box off-road competitor (and by all means it is) I was happy to see it came with the basic off road goodies like an 18” rear wheel, kickstand, hand guards, spark arrestor and off-road specific tires. Speaking of tires, although they are off-road specific, I’ve never been a fan of the Dunlop AT81 front or rear tire. In my opinion the front and rear tires lack side bite (lean angle) in turns (flat turns especially) when conditions are dry and slippery. You may have noticed in the beginning of this story that KTM has pre-welded on tabs for a skid plate, you may have also noticed that I didn’t mention a skid plate in the off-road goodies list that come on the 2019 KTM 450 XC-F. Maybe I sound like an old man, but for god sakes, if it’s an off-road bike and it comes with handguards, it NEEDS to come with a skid plate too, even if it’s just a glide plate. After logging mile after mile on the orange off-roader it’s clear that KTM is still one of the leaders in the off-road competition bike category. One of the cool parts about KTM is that they make a bike for everyone and if this bike sounds too aggressive for you because you’re either a slower racer, or mainly a trail rider, take a look at KTM’s EXC line (hopefully we will get our hands on that line soon). However, if you’re an avid off-road lover like me or are an aggressive trail rider, the 2019 450 XC-F should be at or near the top of your list of bikes to buy. If you have any more questions about the 2019 KTM 450 XC-F or any other burning questions, feel free to reach out to me at Michael@keeferinctesting.com.