(Editor’s Note: Dominic Cimino is one of Keefer Inc. Testing’s OG test guys. In fact, I recruited him over at Dirt Rider when I was there because he was such a solid dude. He can ride a bike at a high level, is trustworthy, is no BS and his testing skills are good because he can feel what is going on with a bike as well as communicate that to others. Dom is the epitome of a “motorcycle enthusiast” and this is what he had to say when he had the chance to ride the 2019 Yamaha YZ450FX).

I have learned that the East coast version of the term “offroad” can be different than what we are used to on the West. Single-track inside of thick forests with mud, water-crossings, wet roots, sand, and steep up/down-hills are some of the normal elements found on the east. As a proud desert rat originally hailing from Las Vegas, my version of offroad consisted of fast, open terrain – lots of rocks, whoops, and everything else that comes with the desert. But once out of my west coast bubble and into new territory, offroad riding can change dramatically. More specifically, with a focus on better introducing the media to a true GNCC experience, Yamaha hosted us on Randy Hawkin’s private property in South Carolina, with a 12 mile course that contained all of the elements previously mentioned. It was important for Yamaha to really put an effort toward showing why so much cross country R&D goes into their FX/X models, to make them shine in these east coast conditions. GNCC is a very strong sport that showcased impressive numbers in 2017: roughly 12,000 riders competed last year, in front of almost 70,000 fans. Which brings us to the 2019 450FX – a “true closed-course competition, cross country racer”, and this is my first impression after having a blast riding in the greenery of the south. 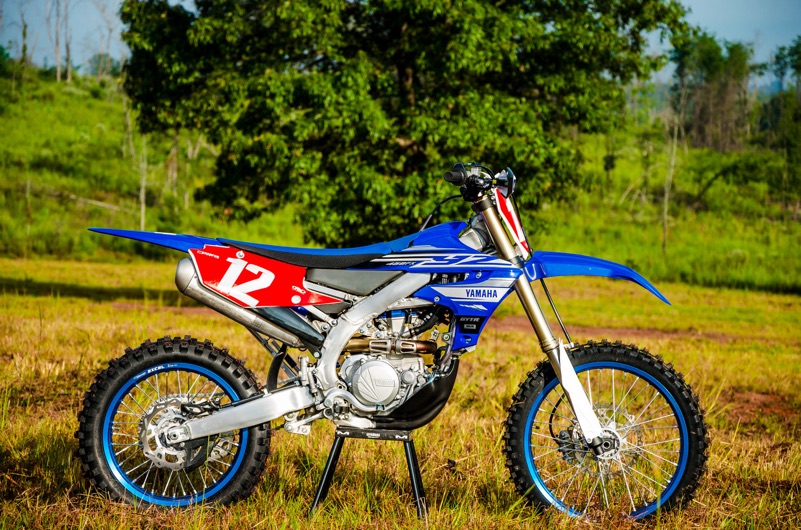 For 2019, the 450FX sees a lot of important updates that has stimulated much of the motocross model success. The bike is graced with the new chassis, updated KYB suspension, the best Power Tuner in the industry, and other offroad specific traits. Yamaha focused on making a 450 tailored specifically for tight woods riding, but also versatile enough to take it onto an open stretch of desert at high speeds. To the naked eye, it looks practically identical to the motocross bike – the only real tell-tale offroad components are the 18” rear wheel, updated kickstand, and full-coverage skid plate (which has been upgraded for 2019). But once you dive a little deeper, you will see there is much more. Most notably, the motor itself has been specifically tuned for cross country racing, with the wide ratio five speed transmission and EFI mapping/ignition timing that all compliment one another. The suspension components are sprung lighter and have valving specs that are aimed at pleasing riders on tight and technical trails. A new 2.2 gallon gas tank is stowed away nicely in the new chassis, reducing the amount of times needed to refuel. This bike is an offroad “sleeper” if you will, coming off as a motocross bike aesthetically, but harnessing almost everything you need to race at the highest levels in offroad today.

To put it lightly, this motor is an absolute monster! It has such a broad scope of power with the wide ratio transmission, that it allows you to ride the bike in many different ways. First gear is low – if you need that emergency gear to get you out of really tight sections, say no more; it can practically lug you out of the swamp. And on the complete opposite, once you hit fifth gear, forget it! Fifth gear is so fast, its like having an overdrive. The versatility of this power plant is something special, as the 450FX compliments a wide range of cross country elements, and our 12 mile test course allowed us to try most of them. On the other hand, I did notice that the engine braking character can be intense at times and I wish there was a better way to lessen it’s dramatic effect on the trail. One of the biggest stand-outs for the new year is the Power Tuner app. This standard feature lets you tune the bike anyway you want – let me try to rephrase that: you can literally customize your motor character from your cell phone, people! This is a major advancement, and after learning how to use the app on this trip and trying extreme opposite maps to really feel the differences, I was blown away with the results. Furthermore, the 2019 450FX also has an alternate map switch on the handlebar, that allows you to switch between two different maps on the fly. It comes stock with pre-programmed base settings (one aggressive, one mellow), and then as you customize your preferences in the app, those changes are reflected on top of those settings. I had two goals when testing this technology; fine tune a map specific for my personal liking, and also, load two maps that were polar opposites to one another to see how much the bike would change after you push the button. My teammate for this test, Randy, summarized it best: when we loaded the opposing maps into the bike, it was literally like have two different motorcycles at your disposal. The changes can be anything you can imagine – do you want a fire breathing 450 in map 1?  Great, its all yours.  But when you get tired in 5 minutes, do you want to tame the beast into something that feels like a 300cc trail bike? Great, push the button! It really is impressive what you can accomplish using this technology, and the app has so many other useful data traits that anyone can appreciate. Kudos to Yamaha!

When it comes to the chassis, I think it is obvious that Yamaha’s new version they introduced on the motocross bike last year has been their best in quite some time. They made substantial progress with handling characteristics and ergonomics, as the bike feels smaller and more nimble. But, I will be the first to admit – I still wish this bike could go on a diet to shed some “L-B’s.” It is a heavy motorcycle overall, and in certain sections it can feel sluggish when you need to bob & weave your way through the trees at a slower pace. Luckily, Yamaha has done a great job at centering the mass right between your legs, which greatly increased it’s agility. When riding at a faster pace, the “weight complaint” can transform into making the bike feel more stable. You can mow over some nasty sections with ease on the 450FX, which comes in handy when the going gets tough. The chassis is very forgiving overall, as the bike will not transmit unwanted force and energy into your hands or feet. The new ergonomics are my favorite, as the rider cockpit involving the seat and shroud combination is much improved. It is fun to lay it into corners with it’s narrow shrouds, and having a lower seat profile allows you to move from the front to back with ease.

And lastly, the infamous KYB suspension components are literally the best in the business. Having the privilege to ride and test new bikes year to year has allowed me to appreciate just how good these components are. Right out of the box the fork and shock work very well, and with minor adjustments become that much better. The 2019 450FX sees the exact same components as the motocross sibling, but with specific valving and spring rates that allows the bike to perform better for GNCC and offroad riding. The fork springs are 4.6 N/mm, compared to 5.0 on the motocross bike, and the shock spring is 56 N/mm compared to a 58. Having owned the original 2016 450FX myself, these components and new valving specs are much improved. On the older bike, the forks were way too soft causing the “stinkbug effect” under any type of braking or when charging into corners. The 2019 does not have that problem, as the bike has a much better balance that allows the front and rear to work as they should. On the forks, I actually went one click out on compression and one click in on rebound, to create a more planted and plush ride in the conditions we were in. The shock is stable and predictable, and I only found myself slowing down the rebound to help when popping over roots and logs in the trees of Hawkin’s Ranch. Overall, the suspension package is impressive and I believe that it can accompany a wide range of riders and skill levels.

This experience riding the new Yamaha cross country race bikes in South Carolina was very cool. Not everyday are we exposed to riding a private, beautifully laid out GNCC course in epic conditions, and then catered to with Southern hospitality every step of the way. Riding 2019 bikes is one thing, but riding them in the environment in which they belong is a whole other ballgame. It allows you to truly appreciate the nuances and specific traits associated with being a true closed course competition offroad racer. And as Yamaha’s testing team continues to develop amazing bikes year after year, they do so with a focus on making them better in each respective category. You can trust that the 450FX is not a motocross bike in sheep’s clothing – this bike is specific to offroad in every way. I would like to thank Yamaha for providing us with a great experience, and also Mr. Hawkins for being one of the nicest, most hospitable guys in the sport (he can make a mean “shrimp boil” too). As always, please stay tuned to KeeferIncTesting.com for more coverage on offroad related materials coming your way soon. Thank you for reading! -Dominic Cimino