There are certain things on motorcycles that are easy to improve on (seats, handlebars, foot pegs etc). Then there are grips, which for the most part are just rubber pieces on the ends of your handlebars that help keep you connect to the machine. However, for being just “rubber pieces” most riders are particular about which ones they use. Most riders have their favorite sets of grips and usually stick to those as long as they’re riding. As of late there are a few companies out there who have decided that the grip needed a revamp and could be made better. Pro Taper is probably the largest handlebar company to jump into the clamp-on grip market and I was happy to get my hands on a set (pun intended). I wanted to see for myself if the days of safety wire and glue were a thing of the past. Instead of just molding rubber over plastic like some other companies have done, Pro Taper took a deeper look at the clamp-on grip to see how they could be made better. They windowed the clutch side plastic housing so there’s more cushion for the rider’s palm and fingertips. In addition to the windows in the housing they also made the overall diameter of the left side grip slightly smaller. 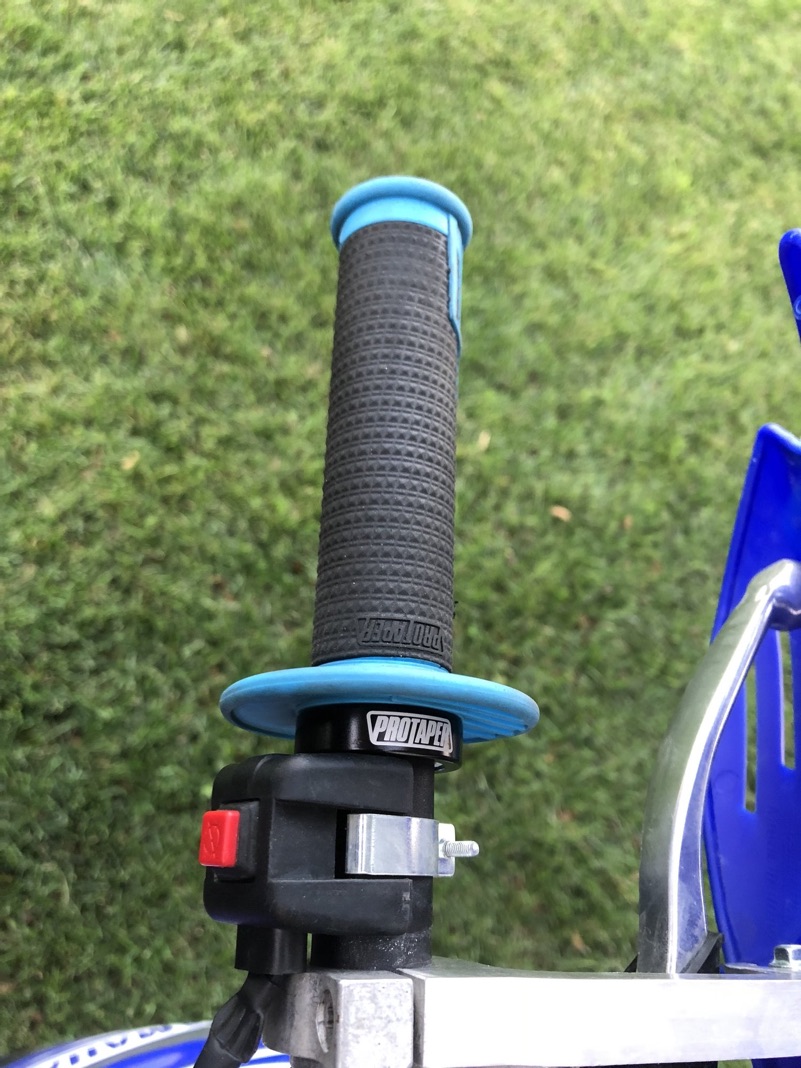 I got the PT grips (I got ½ waffle, but they offer 3 grip patterns) for the 2019 YZ 250F test bike and figured the neon blue/black (they have a magnitude of colorways) would look decent so I started the install process. The clutch side is as easy as it sounds, cut off the old grip, make sure the bar is clean, slide the new clamp-on grip on and tighten the pinch bolt once the waffle is oriented the desired way. For the throttle side Pro Taper gives you a selection of throttle cams that lock onto the throttle tube. In the instructions they give you a list of the cams they provide and what bike they go to. You just have to match the number with your bike, index the gears on the cam and throttle in the orientation you want the waffle. Next you need to remove the stock throttle tube and replace it with the new Pro Taper Clamp-On Grip/Tube combo. This is where it can be slightly annoying because once I got the throttle side reassembled, I realized the teeth were off by one so I had to take the whole throttle assembly back apart to re-index it (I’m anal with how my grips and levers are oriented). Once back together the grips are 100% locked on and they haven’t moved on me since the install.

The first thing I noticed when I rode the bike was the smaller clutch side grip. I was personally not a fan of the smaller diameter because of my large hands (I wear an XL glove), but some other testers with smaller hands have mentioned they like the smaller size. I’ve ridden with other brands of clamp-on grips and noticed a definite increase in vibration to my hands over traditional style grips, but this wasn’t totally the case with the Pro Taper Clamp-On Grips. Although the vibration is much less than other “Clamp-On” brands, I still notice a slight increase in vibration over the stock Yamaha grips on both sides. They never twisted after riding in mud or after being washed, nor did the clamp ever come loose. All that being said let’s get to the point; although a good idea, I don’t think clamp-on grips are for me for the following reasons. I don’t like the slight vibration felt through the grips. I don’t like the smaller clutch side grip (could just be my large hands). I don’t like having to take the throttle assembly apart to change grips. Lastly, are “we” that lazy that “we” can’t put on some glue and slap on a grip? If the reasons I just listed don’t apply to you then these grips just may be for you. Maybe you don’t like safety wiring on grips? Maybe you hate grip glue or maybe you just don’t like having to slide on new grips and would rather clamp them on. For me however, I think I’ll just stick to the old school rubber things on the ends of my handlebars. -Michael Allen

Second Opinion: I also have put some time on the Pro Taper Clamp-On Grips…I am much like Michael where I prefer glue on/old school grips. I get what companies like Pro Taper are trying to do here though, I am not oblivious. They are making it easier for the customer to install new grips and giving them more choices. I believe this is a great business model for the weekend warrior and to me there is no real negative to the Pro Taper Clamp-On Grips…Except getting a slightly firmer feel than my glue on style 1/2 waffle soft grips. The Pro Taper Clamp-On Grips are not as rigid feeling as the ones that come on the KTM’s so that’s a plus. Just like Michael said, if you’re a “Clamp-On” type of rider then you will be impressed by these grips. I prefer a glue feel, but I am super annoying and picky. -Kris Keefer