It’s no secret that the YZ250F is one of, if not the best 250F in the class for 2020. One of the things that makes the YZ stand out is the raw amount of torque it produces compared to the other bikes in the class. Some of the other bikes may put out comparable peak horsepower numbers, but when it comes to useable bottom end torque no one comes close. After the 20-hour mark we started to really notice the stock exhaust getting a raspy, hollow sound that was getting on our nerves, so we called FMF and ordered up their Factory 4.1 RCT Stainless full system with carbon end-cap. The 4.1 stainless system has a great look with the carbon cap and has a weight savings of just north of one pound over the stock system. We went with a stainless system for the durability of stainless over titanium. Stainless slip fit joints last longer than titanium and therefore will not get as loose over time. 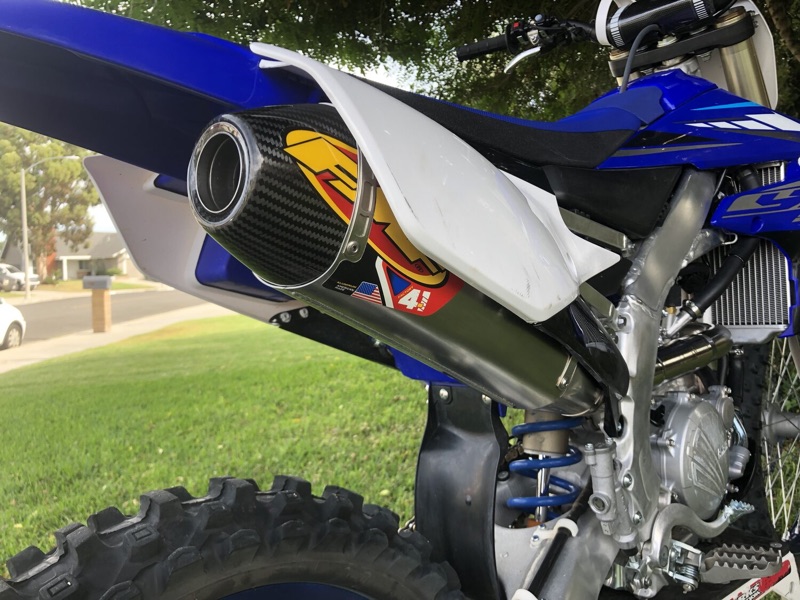 Installing the system was very straight forward and easy, as well as fit and finish being top notch. Something I really like about the FMF system is that you are still able to use the stock muffler heat shield on the left side of the bike. I can’t tell you how many Yamaha’s I have melted pants on when the left side of the bike doesn’t have a heat shield. Unlike the stock systems raspy sound, the FMF has a deeper tone that is throatier and far less annoying. Another plus of the 4.1 system is that it comes with a spark arrestor, which not only makes the bike legal to ride in places (that require spark arrestors), but it also helps quiet the bike down even more and even helps shape power delivery (more on that later).

The first time I took the bike to the track with the new exhaust I left out the spark arrestor and I noticed a slightly freer feeling from the engine (note: I was using the “Keefer free feeling” map found here https://www.keeferinctesting.com/motocross-testing/2019/7/22/2020-yamaha-yz250f-on-track-facts-and-figures). This is due to the FMF muffler core being larger in diameter and having less back pressure than stock. This slightly took away from the torquey bottom end as well as a little of the mid range RPM response, but pulled a little further into the top end. After riding the bike for a while with the exhaust wide open, I decided to give the spark arrestor a try after talking to Kris. He explained that some bikes need more back pressure to make the engine preform at its best. Just like he said, after putting the spark arrestor/insert inside, it gave the Yamaha some more back pressure, which really helped the bottom end power out of corners. The bottom end pull was slightly better than stock and the mid range pull was slightly longer, but I felt that the over-rev went back to being as good as the stock exhaust. In my opinion the OEM’s have been very good at perfecting the stock exhaust systems as of late and it has made it harder for companies to make giant gains over the entire RPM range of the stock equipment. That being said FMF has done a great job squeezing every bit of power out of the 4.1 system. Having the removable spark arrestor makes it nice to not only be trail legal, but it gives you the option of creating slightly more torque (insert in) or slightly more over-rev power (insert out). FMF also works with Kris on settings as they will send some pieces for him to try to see what his feedback is. If you know Keefer, then you know he doesn’t give a shit about a dyno chart, he wants real world “on track” testing and FMF has been doing this.

I have been running the 4.1 system for over 10 hours and it isn’t showing any signs of getting louder or raspy. For my personal preference I have been keeping the spark arrestor in because I prefer slightly more torque on my 250F’s. The insert is easy to take in and out using a pick or small screw driver and removing or installing the spiral snap ring. The only physical signs of wear the system has shown is the sticker on the end cap has started to melt and bubble. From my experience this is normal after multiple hours of being ridden hard, but you can purchase new stickers from FMF. It’s also to be noted that keeping your muffler packed with quality muffler packing is key to its performance on the track. We go as long as 20 hours on FMF muffler packing, but will not go much more than that because of performance loss. FMF doesn’t have a re-furbing center, so doing it yourself is your only option.

We will be putting this system up against the competitors soon in a small exhaust shootout so be on the lookout for that. If you have any questions about the FMF 4.1 on the Yamaha YZ250F, please email me at Michael@keeferinctesting.com and I can try to help out as much as I can.