I’m sure there are a lot of people who come to the Keefer Inc. website that don’t really care about off-road bikes, but then there are my people; the ones who not only love off-road, but just motorcycles in general. Like I said, I love off-road bikes, so when Yamaha asked us if we wanted to try the 2019 WR450F, I was all about it. In the past it usually takes manufacturers up to three years to move the changes they’ve made to their motocross bikes over to the off-road line, but for this model, it has taken just under two years. The 2019 WR 450F is all new from the frame to the engine and even down to the headlight, in which Yamaha has made big changes. 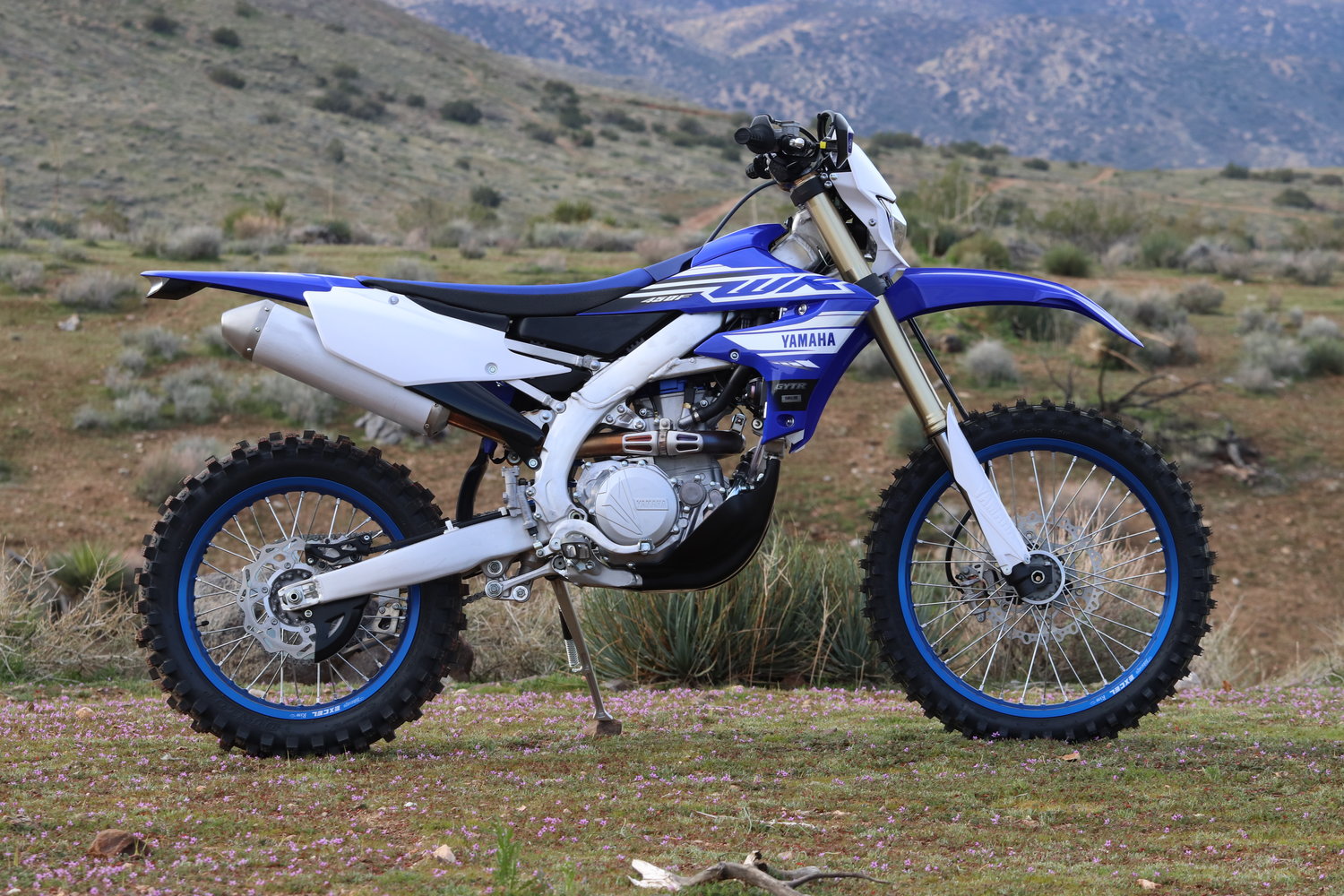 The WR has an all new engine with a more compact electric starter that is mounted behind the cylinder and drives the clutch basket. This starter also has a heat shield on top of it to protect it from the head pipe. The engine shares a lot of parts with the YZ450F, but some parts are specific to the WR like the clutch plates, and magneto rotor. The different clutch plates help provide a lighter clutch feel as well as better clutch modulation. The wide ratio 5-speed transmission spreads the power out over a much wider range than the YZ450F and it was explained to us this way.. The gears on the WR are spread as follows: First gear is like adding fourteen teeth to the rear sprocket of the motocross bike Second gear is like adding eight, third gear is like adding two teeth, fourth gear is the same as the motocross version, and fifth gear is like removing four teeth, which almost acts like an overdrive. The other main change to the 2019 WR450F is the chassis, which has a rigidity increase of 25% vertically 9% horizontally and 15% torsionally. Don’t let those numbers scare you into thinking this bike is going to be too stiff because Yamaha went to work in other places to give it a better overall balance (while retaining comfort) than the 2018 version. Along with the new chassis, the 2019 WR has slimmer bodywork that make the shrouds 16mm narrower, really helping minimize the “bulky” feeling that some people associate with the Yamaha. The new headlight is tucked closer to the head tube as well as being lower, which helps keep the weight closer to the center of the bike. Another cool feature the WR has is a digital trip meter/speedometer which is adjustable so it can be used for enduros or rally events. Finally Yamaha has gone away from their old cable drive for the trip meter and entered the 21st century using a magnetic pickup. The wire for the pickup is cleanly routed behind the left fork guard and is completely protected from off-road elements. The 2019 comes with a fan, which in my opinion is a necessity for hard core off road bikes. The fan does seem to run for a long time once stopped on the trail, but I was never left stranded with a dead battery over the course of our test. The fuel tank is slightly larger on the 2019 at 2.16 gallons which was achieved by using a more compact fuel pump that allows for more fuel volume. The stock skid plate is very cleanly mounted and offers more protection up the water pump than the 2018 model. Although Yamaha put GYTR handguards on the bikes for us on the intro day, the bike does NOT come with them, which in my opinion is a bummer because after all it is an off-road bike.

Now that you know all the changes to the 2019 WR, here is how it works in the real world. To start, the bike comes from the dealership slightly more corked up than the form we rode the bike in. We were told that the way the WR50F comes is a Japanese  standard practice and removing the items that we took off did not change the bikes legality in any state (even California). Unfortunately for this year the WR is not a green sticker bike in California and is stuck being a red sticker for the time being because of some new California regulations (thanks California). Back to the un-corking we did; the stock intake comes with a snorkel under the backfire screen, feel free to remove it and you’re 1/3 of the way to making the WR rideable. Next remove the throttle stop screw to get the full range of throttle opening and finally take out the ridiculously small pee hole cork in the muffler to help the bike breathe. Like I said, this opens the bike up while still keeping it legal to ride on the trails, but at the same time doesn’t un-cork the bike and make it loud and raspy. With the bike ready to ride, it’s still remarkably quiet and to be honest I had my doubts about how good it could be because it was so quiet.

The 2019 doesn’t come with a kick starter and in fact doesn’t even have the hole in the side case to be able to put one on. This may worry some old school people, but in all my years of testing electric start dirt bikes I have never been stranded by one on the trail. If the bike is in neutral, the clutch doesn’t need to be engaged to start the engine, but if the bike is in gear, the clutch does need to be pulled in to get the starter to turn over the engine. This can be over ridden by cutting the wires that goes to the clutch switch and soldering them together (but you didn’t hear that from us). One thing that we did discover that seems to be an issue with all of the current Yamaha models is that they don’t like to be started while in gear. For some reason the extra drag of the clutch is slightly too much for the engine to turn over and actually fire, so we found ourselves having to put the bike in neutral most of the time to get it started.

The engine on the 2019 WR450F is greatly improved over the 2018 with a much more free revving feeling, which no longer makes the engine feel heavy slow revving. Yamaha told us they still wanted the WR to have a trail bike feel without having it feel like and old Honda XR. In my opinion Yamaha did a great job blurring the line between total trail bike and off-road race bike. With the new slightly more powerful engine, the 2019 WR has a more playful power characteristic, which makes the whole bike feel lighter and nimble. The corked-up sounding muffler didn’t hamper power nearly as badly as I had imagined. In fact after talking with Keefer we both agreed that the lack of “sound” never hampered the bike’s power delivery all day. Not once were we unable to ride over an obstacle or complete a hill climb due to a hiccup or lack of power. In fact we rode some very long sandy hill climbs and were able to clean them every time all while hardly making any noise. I think the new engine will give the WR the ability to be raced (even in stock form) without feeling like the bike is at a disadvantage. We were told that this is the closest that the WR has ever been in relation to the YZ 450F model and when on the trail it’s pretty clear that the WR has the ability to be pushed whenever you want to pick up the pace.

The increased rigidity on the 2019 was immediately felt on the trail, but not necessarily in a bad way. Although the stiffer chassis does result in a slightly less comfortable ride at slow speeds over small chop/rocks it gains in agility on tighter trails. The chassis no longer feels lethargic and lazy when trying to make quick direction changes, instead it reacts quickly with minimal input from the rider. Just the slightest weight transfer to the footpegs and the WR reacts with confidence without feeling too twitchy. I think that the change to the engine really works in unison with the new chassis, to make the bike feel more exciting and more like a competition bike. With that being said the WR still acts like a trail bike, but it just seems to me like Yamaha has moved the WR slightly closer to the FX model than it has ever been. One place where I felt the 2018 was slightly better than the 2019 was straight line stability on very fast/loose rock jeep trails. With weight comes stability and the lighter feeling 2019 WR450F does feel slightly looser feeling at speeds than the previous model. For my personal taste I would take a better handling bike over one that just goes in a straight line well.

Yamaha never tried to chase the dragon when all the other manufacturers were on the air fork train. Not going down the air fork road only helped Yamaha because they never stopped developing their KYB SSS fork, which in my opinion is the best OEM fork on the market.  Recently other manufacturers have been bragging about how their suspension is basically an “A-Kit”, but the SSS suspension is outperforming their so called “A-Kit” set ups. Yamaha seems to rely on the performance of their fork and knowing that giving it a cool title doesn’t make it perform any better. We like that! The fork on the WR comes with a 4.6 N/mm spring while the shock come with a 56 N/mm, which are both slightly stiffer than the 2018 WR, but lighter than the 2019 YZ 450F. The fork and shock on the 2019 WR450F work perfectly in unison unlike the 2018 model which has a front heavy pitching sensation when getting off the throttle as well as using the front brake. The balance front to back is much better (on the 2019) and the suspension settings have a much better balance. The range of terrain the 2019 WR450F can handle is much wider than the 2018 and that gives the consumer the option to open up a wide variety of trail options, without having to compensate for the 2018 shortcomings. The new WR can be pushed with more confidence at a faster pace without blowing through the stroke and gives the rider more comfort.

I think that overall it’s safe to say that Yamaha has made a much better WR that has done a great job of blending a trail bike and race bike. I feel like if you wanted to buy a Yamaha to race closed course events then go trail ride with your buddies you were pigeon held to buy the FX in 2018, but now for 2019 I feel like the WR has taken that place. If you ride trails the majority of the time and occasionally race, the WR is truly a viable choice now. As European manufacturers step up their game, I thinks it’s really cool to see Yamaha answer with improved off-road bikes. Yamaha is waking up and realizing that they can make a bike that can be a trail bike without being too soft and lazy feeling. Instead Yamaha has made a comfortable trail bike that can be ridden at a race pace if you feel like stepping up your riding game. It has been apparent over the past few years that most trails and starting lines have turned orange-ish in color, but after riding Yamaha’s latest offering, a sea of blue may dim the orange fires. If you have any questions about the 2019 Yamaha WR450F feel free to reach out to me at Michael@keeferinctesting.com.