The Pro Taper Fuzion handlebar has been around for a while now and was a totally new concept to the off-road world (for crossbar lovers) when it was released a few years ago. The flex/locking system allows riders to choose between a stiffer/more controlled handlebar feel or a softer more shock absorbing feel depending on terrain and rider preference. Changing the bar from “Locked” to “Unlocked” takes only seconds by simply removing the bar pad and turning a knob. The Fuzion utilizes Pro Taper’s exclusive aluminum alloy, 4mm wall design for lightweight, strength and comes in six different bar bends. 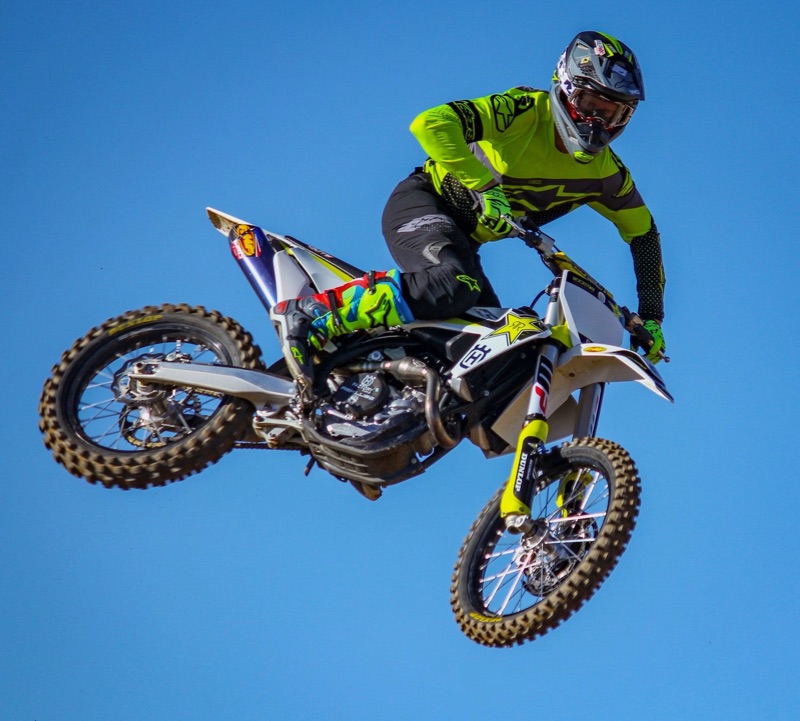 Depending on what type of bike I am riding depends on if I like running a crossbar or not. For example, lately when I have been riding a KTM/Husqvarna I like to run a crossbar because it feels better through corners to me visually (I know, don’t ask). When I ride a Yamaha I go to a handlebar without a crossbar. Why? You guessed it, because they come stock with that style and it feels normal to me. I usually can tell the difference in stiffness when I go back and forth between each type of bar I ride with, so this made me want to test the Fuzion technology.

The 1-1/8 Fuzion handlebar weighs in at 1lb,15oz. and was put on several of my test bikes. The easy-to-adjust locking system can be adjusted by simply taking the bar pad off and turning the knob in the middle of the crossbar. If you’re used to running a 7/8 bar with a crossbar on your bike, but want some added strength, the Fuzion can be a great option. The downside to using a standard oversize bar with a crossbar is getting added rigidity through the bars that could be hard on the arms/wrists. Setting the Pro Taper Fuzion to the “unlock” position was most noticeable on the 2019 Honda CRF450R due to it being a more rigid feeling chassis. In stock form the Honda comes with a Renthal Fatbar handlebar and putting the Fuzion bar on gave me a less rigid through my arms. On braking bumps and hard slap down landings the Fuzion bar flexed as if I didn’t have a cross bar on. Does it flex more than an oversize crossbar-less handlebar? After spending more time on both types of bars I would say it’s very similar, but the crossbar-less handlebar still has a bit more flex to it.

I am very picky when it comes to handlebars and I felt that the Fuzion handlebar (when in the “locked” position) is slightly more precise (than on the unlocked position) when trying to corner on hard pack slick surfaces. Also, to my surprise only a little more rigidity was felt on braking bumps and on flat landings when “locked”. The smoother the track surfaces the better the Fuzion worked in the locked position. However, 90% of the time I felt the Fuzion felt best when “unlocked”. Especially for the hacked out, choppy, desert tracks I test on.  A few tip overs and one big get off left me praising the Fuzion’s durability. This happened on the Husqvarna and the handlebar got twisted in the bar mounts, but the handlebar itself wasn’t bent.

So at the end of the day why not just use an oversize crossbar-less handlebar you ask? The Fuzion handlebar eliminates having “crossbar lovers” cut their oversized crossbar handlebars for increased flex (and avoiding potential handlebar failure to achieve desired flex when he/she demands a crossbar). I like that ProTaper addressed the need for this niche market and cater to picky people like myself. Yes, it’s more expensive (at $129.99) than your average 7/8 handlebar, but it also will withstand a bigger crash.