For the second installment of “Hidden Gems” let me tell you about a piece of gear that goes everywhere with me, even if it means staying put in my gear bag while I moto. The Klim Scramble Pak has quickly become my fanny pack of choice over the years as I have tried many different brands, but never found one as comfortable/useful. My personal requirements for a fanny pack are simple: it can hold at least the basics (rag, wrenches, plyers, tow strap, crescent wrench, wire, zip ties, random bolts and nuts, quick steel etc), have a few different pouches, and most of all be comfortable! 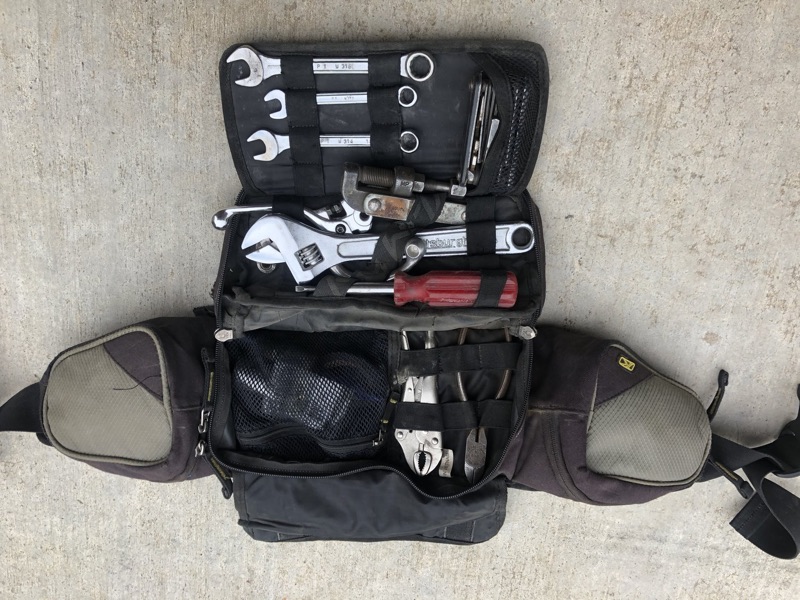 After years of trying different fanny packs, I came across the Klim when I was at Dirt Rider Magazine and we were going out for an off-road photo shoot. In these shoots most of the time it’s made to look like the rider is fully off-road when in actuality all the camelbaks and fanny packs are empty. After wearing the empty Scramble Pak, I was impressed with how padded the sides were and asked if I could keep it to test for a more long term useful opinion. The most uncomfortable part of fanny packs are the side straps that go around the waist which is where the Klim pack shines. The side straps have large pouches that are padded on the inside and actually hold a good amount of stuff comfortably. I usually put zip ties, a microfiber rag, my cell phone, and usually a snack in the side strap pouches. Even with the pouches full they never pinched my sides or gave me any hot spots.

The main portion of the pack is large and has a place for pretty much everything. The base of the pack has large elastic loops that hold down tools like plyers, Co2 cartridges and screw drivers. The base also has a mesh zippered pouch where I like to keep quick steel, duct tape and bailing wire. The second flap has more elastic loops that hold smaller wrenches and other various tools. The third flap has a clear zippered pouch which is where I keep random hardware and a master link for trailside fixes. The main pouch closes with a zipper, Velcro, and two buckles, which keeps everything nice and secure. On the sides of the outermost flap there are now two places to put water bottles (mine is an older model which doesn’t have these) which is a nice feature if you need to take some extra water for those really long rides.

The Klim Scramble Pak has held up so well after five years of abuse. It goes with me on every trail ride as well as always being in my gear bag in case I need something when I’m at the track (yes, I’ve had to help moto guys with “things” that came straight out of my fanny pack). The only small problem I’ve had with it was my own fault… I put my quick steel in the clear pouch and it got smashed into the zipper, so now the zipper is partially bonded closed. Shit! So if you aren’t worried about matching your fanny pack with your gear brand (come on off-road guys, we don’t care) go take a look at the Klim Scramble pack, because although most Klim stuff is expensive, at $69.99 (https://www.rockymountainatvmc.com/parts/klim-scramble-pak-p) it’s a great deal!