Any dirt bike (be it off-road or motocross) should come stock with a skid plate. Some people may say that for motocross it’s not necessary to have one because there aren’t big rocks and hazards, but I feel that having a skid plate is cheap insurance for the under carriage of your engine. I’ve had the 2019 YZ 250F for quite a few months now and have felt a little vulnerable at times on the trail and have been sick of pressure washing off baked mud from the bottom of the engine when riding moto. After doing some skid plate research, I reached out to Works Connection to get one of their Titan skid plates to see if it would help my psyche. One of the cool things about Works Connection is that they make three different styles of skid plates for most models. They make an aluminum glide plate, an extended coverage aluminum skid plate, and a composite (like a good plastic) Titan skid plate. Over the past few years I have come to really like composite skid plates because they seem to be quieter than aluminum when roost/rocks hit them and also glance off obstacles smoother than aluminum. When I received the Titan skid plate it came with all the necessary hardware to mount it to the front of the frame (a clamp and bolts) and a bolt to mount it to an existing hole towards the rear. 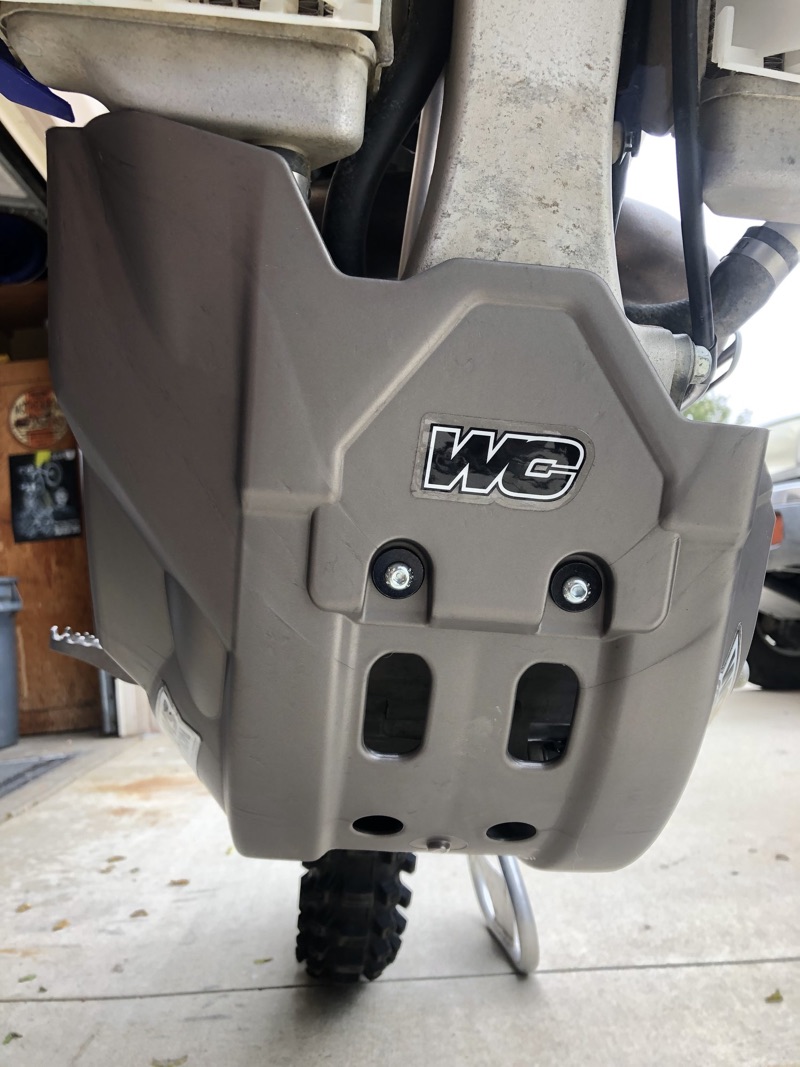 The rear bolt is very easy to install because the threaded hole is already in the frame, but make sure you do this first because it helps hold the skid plate in place while the front clamp is being installed. Once installed it was clear how much protection this skid plate offers, covering both side cases, the water pump and the lower radiator hose. There are a few drain/breather holes in the bottom of the skid plate so debris doesn’t get stuck between the engine and the skid plate. I have used the Titan skid plate for a couple months now and haven’t had any on track/trail problems; in fact it has come in quite handy on a couple trail rides (with my buddies) that turned into a dick measuring contest up rocky washes. The added coverage is a plus for protection and the fact that the mud doesn’t cake on the engine makes washing the bike that much easier. Work smarter not harder they say, right? Composite skid plates also have more flex than aluminum, which is good because it lets the chassis work as it should when hitting bumps/obstacles.