We’ve all done it, watched Supercross on a Saturday night while thinking “man that helmet that Tickle was wearing is bad ass, maybe I’ll go online and pick one up.” Then after adding it all to the on line cart, your wife walks by and notices the total, while simultaneously giving you the “you can stay out here on the couch tonight” look. Let’s face it, no matter what you tell your buddies, we all want to look good when we go riding. Unless you’re a soul rider then you really don’t give two shits, which we still respect. However, some of us are explaining to our wives why the Gucci bag she wants is a rip off, then in the next breath, you’re explaining to her that the $1,500 you’re spending on a custom painted helmet is purely about safety. It used to be that when you bought the “cheaper” gear it was obvious to everyone that you were too cheap to buy what you really wanted. As with most things in life times have changed for the budget minded rider. The “second tier price, second tier looks” scenario seems to be a thing of that past since companies like Alpinestars are now offering  product lines with top tier looks without breaking the bank. 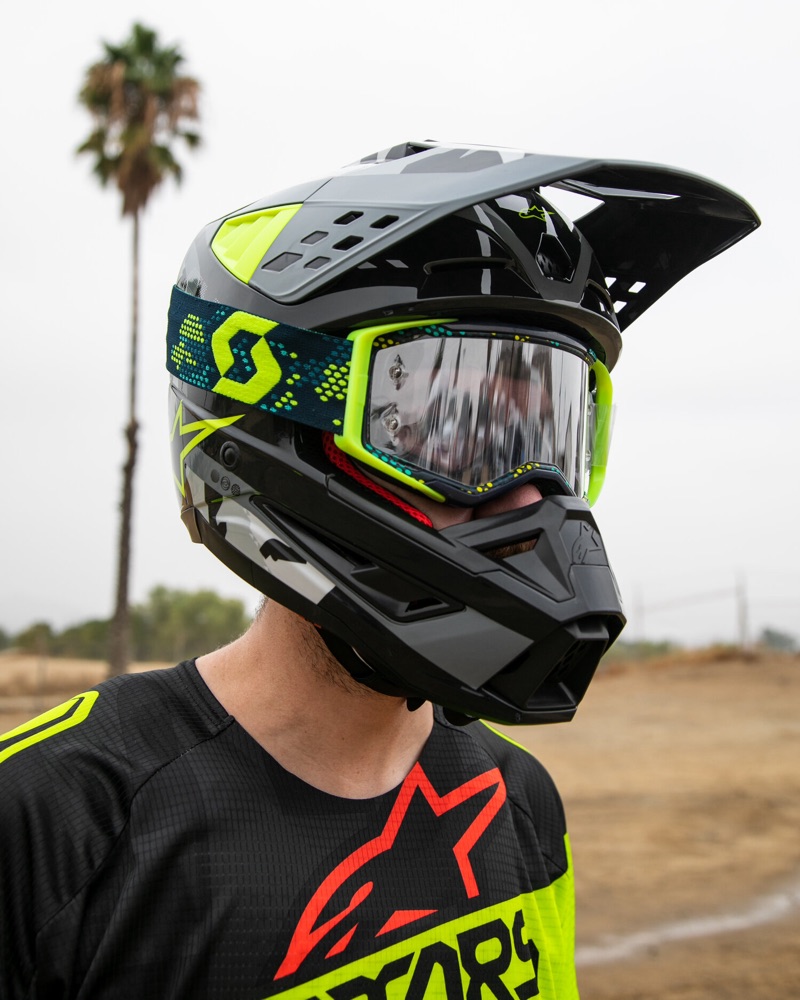 When it comes to helmets, I think it’s safe to say that for years the general consensus has been the more you spend the more protection your head has. While I believe that’s true in the $0-$150 range, there comes a point at which the extra money isn’t necessarily giving you more safety, but maybe “different” safety, maybe more comfort, and other amenities. The Alpinestars SM5 Helmet Is a good example of not having to break the bank to keep your head looking good while staying protected. The new SM5 was designed and built using five years of research and implements new technology and procedures to make a safe and affordable helmet. The shell is thermo-injected with a special polymer that is different thicknesses throughout the helmet to maximize the protection for different impact forces and locations while keeping the helmet lightweight. The EPS liner uses five densities to ensure the correct impact absorption in the correct areas. There is a raised area to reduce the impact transmitted to the collarbone as well as a patented Visor Release System that allows the visor to break away at a pre-determined force no matter the angle of the impact. Other notable features include large ventilation ports front and back, elastic loops for hydration pack hoses, and and ERS system to safely remove the cheek pads by medical workers in case of emergency. 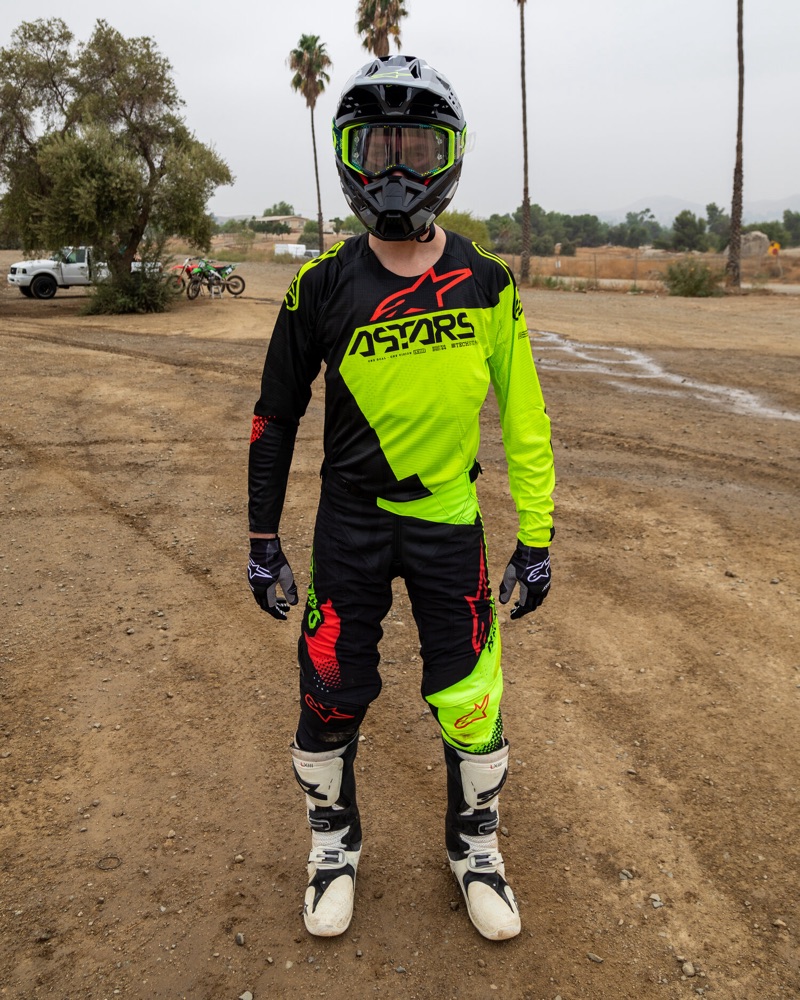 Having spent a lot of time in the SM10, I was looking forward to trying the SM5. I always have the everyday rider in mind and I know that although safety comes first, price is still important when you have mouths to feed, yet still want to be safe when riding. After reading the press release I knew my head was going to be well protected although with any luck I wouldn’t have to test the safety of my new lid. When I opened the box I was pleasantly surprised with the quality and look of the helmet. Whenever I get a new helmet I always check to see how the pads come out since I wash them every time I ride. I am a stickler for ease of removal and unless it’s a really good system, I hate when companies try to reinvent the wheel with fancy fasteners, that make you feel like you’re going to rip the liner out because you can’t figure out how to unclip them. Luckily the SM 5 uses good old fashioned snaps which are simple in theory, but for some reason the snaps take A LOT of force to come undone and made me a little nervous that something else was going to give before the snaps came undone. The liner and cheek pad material aren’t made from anything fancy, but it feels adequate to the face without being uncomfortable. Although I hope I never have to use it, the Emergency Release System is a nice feature that allows for the cheek pads to be removed without un-snapping them. The 26mm chin strap is comfortable and the snap is easy to fasten and remove.

When putting the SM5 on it seems that for the shape of my head the inside feels like its contacting my head in multiple places (like pressure points but not painful) instead of cradling it in one constant contact throughout my whole head. The best way to explain this is to imagine a net (the liner) with medium sized holes cradling a bowling ball (your head) compared to a pillow case cradling the same bowling ball. They both support the ball, but the pillowcase is making more contact than the net. I really only noticed this when putting the helmet on, but for some reason I didn’t notice it when riding (probably because I’m focusing on not crashing). The integration of the small elastic loops under the cheek pads (for a hydration system hose) is a great feature and I hope it catches on so we stop seeing people drill holes in their helmets to secure the hose with zip ties. When testing the SM5 I wore the Scott Prospect goggles as well as a set of Airbrakes, which both fit inside the eye port without any issues. Southern California’s climate has been scorching as of late and although I don’t feel like the ventilation was excessively great, I did notice that the air in the shell was moving and keeping my head semi-cool. The only real issue I have with this helmet (other than the lack of a plush feeling for my head) is the Visor Release System. This isn’t necessarily an issue with the SM5 specifically since Alpinestars uses the VRS system on multiple models; the issue I have is not being able to adjust the position of the visor. Being an off-road guy there are times when I need to look like a goon and push the visor, down at the end of a trail ride, when the sun is setting and with the SM5 I have no ability to do that. 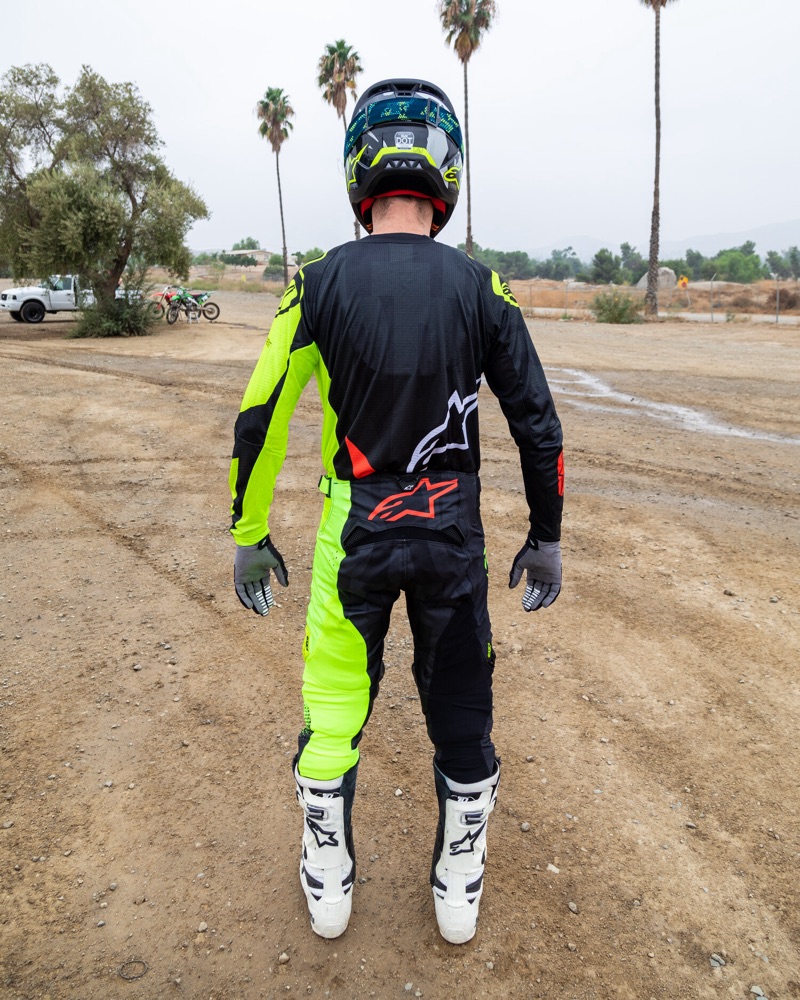 After riding with the SM5 for some time now, it’s shown itself to be a good offering from a great company. It’s awesome that there is a good looking helmet design mixed with eight different colorways that won’t break the bank coming in at $259.95. A medium SM5 also weighs in at 1260 grams so it’s not that heavy on the head when wearing it on longer motos. The bottom line is that the SM5 is a helmet that is not un-like one of its potential buyers; the blue collar worker. It doesn’t have all the frills of a top dollar helmet, but it looks good and is there with the right amount of protection when you need it; if you need it. If you have any questions about the Alpinestars SM5 feel free to reach out to me at Michael@keeferinctesting.com