Dr. Gardner Tarlow has been my doctor for may years. Dr. T has helped riders like Tim Ferry, Ricky Carmichael, Travis Preston, among others over the years. Dr Tarlow also loves to ride and just like you and I finds his spare time at either the track or trails of Southern California. He has been bugging me to ride the YZ125 X since it came out last year so I thought it would be a good read to hear what an average Joe rider like Dr. Tarlow thought of the YZ125X. Here are his words. -KK

The YZ 125X was designed to be a closed course GNCC style race bike. It’s hard to imagine that a YZ125 with more bottom end, softer suspension, feather light and an 18” rear tire wouldn’t make a good GNCC race bike. Unfortunately, I don’t live on the east coast and my version of cross country is the high desert all the way to the foothills of the California mountain ranges. This means everything from sandy, rutted, rocky, hard soil with technical long hill climbs.

I was lucky when Kris gave me the opportunity to ride the 2021 YZ125X. To be honest, I had been bugging him to ride this bike since it came out in 2020. So naturally, it took me by surprise when he offered to let me ride the 2021 bike and write up a review.. Kris has a lot of options when it comes to having people test bikes and I didn’t imagine I would even make the list. I would consider myself an open novice for both motocross and enduro. I am not the target market for this bike. I already have my AARP old man card and at 5’10” and 190lbs without riding gear. It’s safe to say, I definitely put this 125s ability to perform well in the hills at a disadvantage. 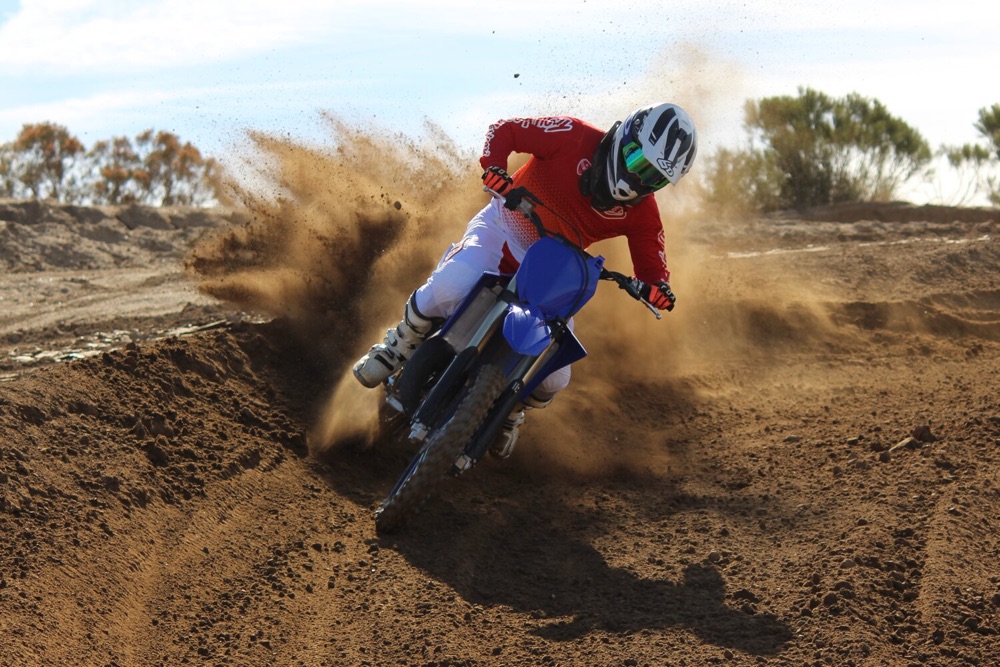 My first few rides were at Glen Helen Thursday practice, followed by multiple days at Cahuilla Creek. At 190lbs I’m not the ideal rider for any stock 125 motor or suspension. Most important for me was to assess the performance of the motor. I’ve rode a few different 125s and I was curious to see how the motor would differ. Out of the box, the jetting on the bike seemed appropriate and pulled cleanly in almost all riding situations. Under heavy downhill braking, the motor seemed a tad rich and hesitated with a slight bog. Turning the idle up and resetting the air screw cleaned this up somewhat but most likely the bike needed a change of needle height. The motor had a good bottom end with strong mid and top end performance. The top end power and pull seems to flatten out more than a regular YZ125 but then again, each bike is designed for different purposes. Although the top end isn’t the same as most track 125s, it pulls plenty well for track practice days or club racing. When I found myself in the wrong gear, a quick fan of the clutch and the motor lit right up, minimizing my poor riding technique. I gladly would give up the top end performance for the enhanced bottom end grunt, if that term can be used for a 125. I had forgotten how busy you need to be to keep a 125 on the pipe. The suspension in general was not designed for my size, however I was able to dial it in to where I could ride it without major issues. I eventually settled on Fork compression 10, rebound 7, forks 7mm up in clamps. Shock at 103-104mm race sag (free sag 20mm, need stiffer spring) low speed compression 10, high speed compression 2 and rebound 8. Despite the bike being significantly under sprung for me, the bike didn’t have any harsh landings or do anything to spook me or make me feel like I needed to back it down. Once I got the suspension dialed in, I was able to take any line I chose and the bike had that classic 125 feel and sense of just falling over into turns and railing ruts. For a bike that I was hoping could serve dual purposes, this little 125x was a blast at the track. With the exception of having a kickstand stare at me each time I came back to the pits, I would’ve thought I was riding any stock 125 that had a really good, broad powerband.

I initially went to the track because I always think it’s easier to dial in a bike at the track versus out in the hills. I knew from a chassis and suspension perspective this 125x was going to be a blast on tight, undulating, rocky single track. The suspension being a bit under sprung was somewhat of a benefit and less of an issue for the slower speeds and rocky terrain. I actually liked that when I sat on the back of the seat the bike would squat a bit more and allow me to touch the ground, making it easier to pivot the bike more so than my properly sprung KTM 300XC. My bigger concern was that, despite being impressed with how well the 125x pulled up the hills at Glen Helen, could it pull the long hills we ride out in the high desert? Rolling off the throttle or chopping the throttle on a big hill climb is hard enough to recover from on a 300 but on a 125? I figured it would make for a long day of failed climbs. To my surprise, the 125x climbed extremely well. I think because you have to charge up climbs knowing you have to remain in the throttle forces you into more aggressive riding and this got me looking further ahead. That old adage of keeping the throttle on and using the clutch to regulate the power has never been truer than on a 125. I intentionally put the bike in unfavorable situations on numerous long climbs and to my surprise, was able to recover quite easily. There were some technical climbs that had changes of directions and I didn’t seem to dig holes with the 125x the way my bigger bore bikes sometimes do. The more I rode this bike in the hills, the more I actually enjoyed the challenge of climbing on a 125x. In rocky technical sections I felt like I could put the bike wherever I wanted and was able to rock, clutch and pop the bike through difficult sections that I might otherwise struggle in.

One of my last rides I ended up getting lost for an hour on an extremely tight, single tire width, rutted old single-track trail off property in San Diego county. This trail was literally non-stop rutted turning with little to no straights for an hour. The 125x was finally in its true playground and it was without a doubt the weapon of choice. The ability to muscle it around, diving in and out of tight rutted corners, ducking bushes, trees and dry ruts, able to lug 2nd gear and still have the ability to pull out of sections with or without the clutch made me feel like I had a distinct advantage over my buddies on their bigger displacement bikes.

As much as I liked the track days, I enjoyed this 125x out in the hills even more. When it came to undulating, rolling, tight single track, I started thinking, “I need to buy one of these for my bike quiver”. There may be better bikes for both enduro and moto specific riding, but unless you’re planning on racing a 125 or simply can’t fathom having a bike with a kickstand, the YZ125X can absolutely serve as a dual-purpose track and very capable enduro bike. Now the only question is two-stroke versus four-stroke… but we all know the answer to that. -Dr. Tarlow