We have documented a lot of evaluations to the 2020 Kawasaki KX450 right here on Keefer Inc., but I haven’t personally been a part of some of those tests. At times I am simply too busy on other projects, but for 2021 I am going to be personally doing some mods to the 2021 KX450 that I think it needs. Last year my test rider Joe Oehlhof did a ton of work to our 2020 test bike and when I did get to try those mods, I was always impressed with what Joe did to the green machine. Kawasaki didn’t do much to the 2021 model, but the change that Kawasaki did make that I thought was huge was the new clutch. The new cone disk spring clutch makes the Kawasaki more connected to the rear wheel and has less slip under load. The Kawasaki KX450 has the most stability in the 450 class and allows me to hit braking bumps harder because of the very comfortable frame character. The KX450 frame has a slower reactive nature, but this is a very good feeling when the track gets hammered. When hitting bumps at speed, the frame has so much absorption that the suspension setting is less crucial than other 450 machines that are out there on the market. Overall, this is just a friendly machine to ride and the track toughness of the KX450 is superb. 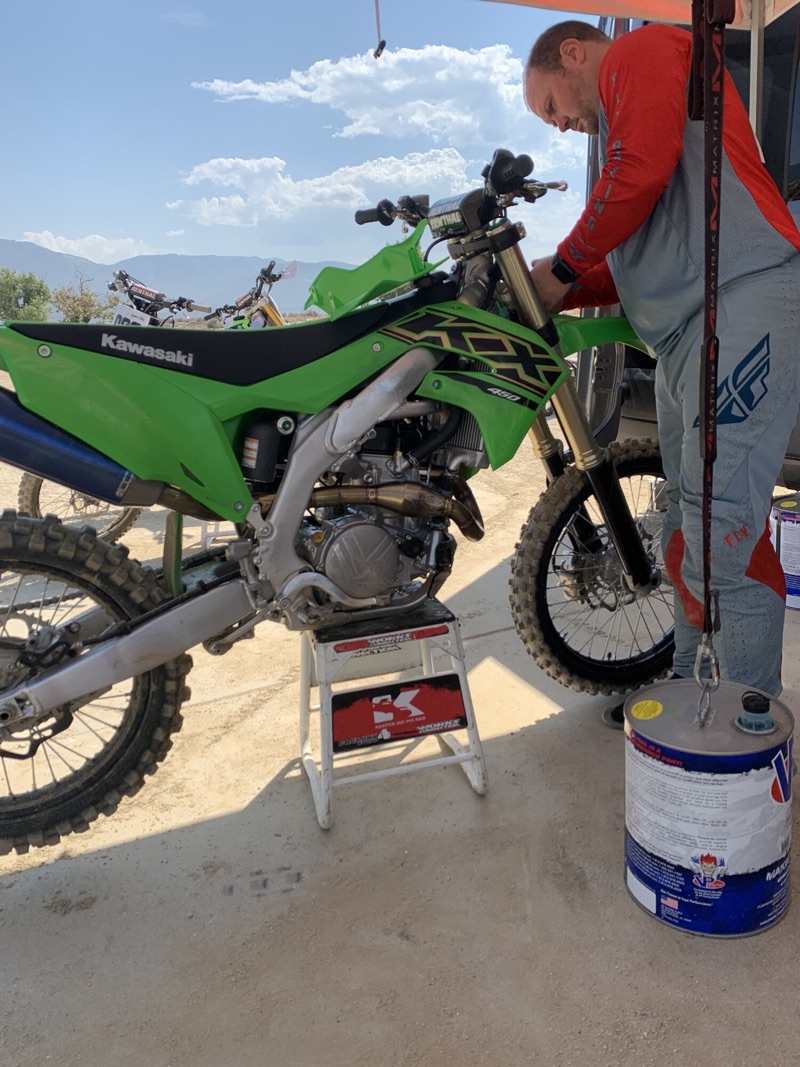 So after my first couple rides, I wanted to do a few mods that I felt were necessary, in order of importance. I already have installed 5.1 N/mm fork springs in order to create less pitching, but to me the engine needs a little more pulling power. The YZ450F has an incredible power plant, but can be a handful to ride when pushing hard. The Kawasaki KX450 has a smoother power character, but needs more Yamaha-like power in the mid range. This is how I described what I wanted when I spoke with Jamie from Twisted Development. He told me he thought he could get some more power with a

After testing a couple mufflers I decided to go with a FMF 4.1 full system with their “SX” style headpipe. Now why did I choose the FMF system? To me the FMF gave me slightly more power where I felt like the KX450 needed it. The stock power curve of the 2021 KX450 engine has a snappy throttle response from 0-10% throttle opening and at times can almost be too touchy through corners (area 2) with the standard green coupler installed. Once rolling on the throttle and passed the corner, the power is not quite as strong as the Honda or Yamaha, but still has that rear connection that I really enjoy. I didn’t necessarily need more bottom rpm response with the 2021 KX450, but I would be lying if I said I couldn’t use more bottom and mid range pulling power when coming out of corners. What is odd is I usually want a little less pulling power from other 450’s, but in this case, I would like the green machine to have a little longer pulling power in second gear. The SX style headpipe, along with the 4.1 RCT muffler made the KX450 feel more playful coming out of corners and gave me slightly more mid range RPM response. The low end RPM response (0-15% throttle opening) was slightly less than stock with the FMF system/SX style headpipe, but now the KX450 had slightly more mid range pulling power without sacrificing too much low end snap. You do get slightly less pulling power on top end/length with the 4.1 muffler/SX style headpipe, but to me it was a minimal loss. Even though the stock Kawasaki muffler looks like complete dog doody, it actually performs really well on the track. To get an aftermarket muffler to perform better than a stock muffler is asking a lot these days, so being able to feel the gains I felt on the track with the FMF system was a selling point for me.

Now that I got my system figured out Jamie from Twisted Development installed a Vortex ECU that we mapped to the FMF 4.1 system. You might be sick of me talking or testing with Vortex ECU’s, but to me, when mapped correctly, is one of the best bolt on mods that you can make to any new generation four stroke. The Vortex has such wide parameters that tuners like Jamie can really change the power character of an engine, without almost any reliability loss. With that being said I didn’t want to alter the Kawasaki KX450’s easy to ride engine too much, but I just needed more meat/pulling power in second and third gear. When I ride deeply tilled conditions, the Kawasaki needs more torque feel to get me on top of the dirt more.

The beauty of installing this Vortex ECU is that it is super easy to bolt on and after you do, you can actually feel where your money went. That is tough to do these days when adding parts to your new motocross machine. Jamie listened to what I wanted and mapped the Vortex so that the KX450 now had more pulling power out of the corners as well as increased the length in which I could use second and third gears more efficiently. I can now roll out of corners in second gear, roll the throttle on and get more acceleration, but keep the rear wheel connectivity that I loved so much on the stock KX450 setting. The throttle control was still there in area 2 and 3 of each corner and when exiting I didn’t have to shift to third as quick like I did with the stock ECU. With the stock ECU (as well as a re-flashed standard ECU), I still couldn’t get rid of that flat power feel when making my shift from second to third gear. Twisted Development’s Vortex ECU setting allowed for more third gear recovery as well as gave the KX450 continued pulling power when making the shift to third gear in deep soil. I will say that adding this ECU doesn’t make the Kawasaki a third gear lugging beauty through corners, like the Yamaha, but at least now second gear is much more useable.

We also mapped the Vortex to where the KX450 now had less engine braking coming into corners which gave the fork a more relaxed feel and that gave me better balance leading into area 1 of tight corners. When you affect any engine’s power character you also affect the way suspension can react and with this map it just increased the comfort of the Kawasaki’s chassis. Does the Kawasaki KX450 feel with these mods feel as fast as a stock YZ450F or CRF450R? No, it does not, but the ride ability of the Kawasaki is much greater than the other two machines mentioned. The rear wheel connectivity is better than the blue or red bikes and now the KX450 has an even lighter feel to it when I need to make sudden line choice changes mid corner.

These improvements that I made to the 2021 KX450 is something I could go race locally with and be extremely happy. The FMF muffler system will set you back $950.00 and a Vortex mapped by Twisted Development is around the same. Without busting into your top end with cams, pistons and head work these two mods are the most bang for your buck when looking to actually feel a difference on the track.

I am going to work on a couple suspension mods next, in order to get a little more performance out of the Showa bump sticks, so be on the look out for that test next. After we get a suspension setting that offers a little more hold up, I am going to ride the crap out of the KX450, so we can answer some of these reliability questions that some of you email me with. The 2020 KX450 proved to be fairly reliable for Joe, as he put just under 50 hours on it, but this year I am hoping to double that mark on the 2021 unit.

If you have any questions about these mods or anything to do with the 2021 Kawasaki KX450, please feel free to email me at kris@keeferinctesting.com and I am here to help!

If you’re looking to get a FMF Racing 4.1 system like the one you see here you can click on the RMATVMC banner on my site and order through that or go to fmfracing.com.

You can also call Twisted Development directly at 951 698 7222 or visit them at td-racing.com.