As you all might know I was assigned the 2020 RM-Z 250 and started the project of finding some horsepower as well as handling improvements on a small budget. If you haven’t checked out the first two parts of this article, go back and give them a read for a more in depth look on what we’ve done so far. For a quick recap, here is what we got so far: with the help of an FMF 4.1 muffler, a Rekluse clutch, a NoToil air filter kit and a couple mods to the airbox, we were able to find some hidden power on the RM-Z. Race Tech also stepped in and got the suspension more comfortable than stock so I was able to actually push hard late into motos. 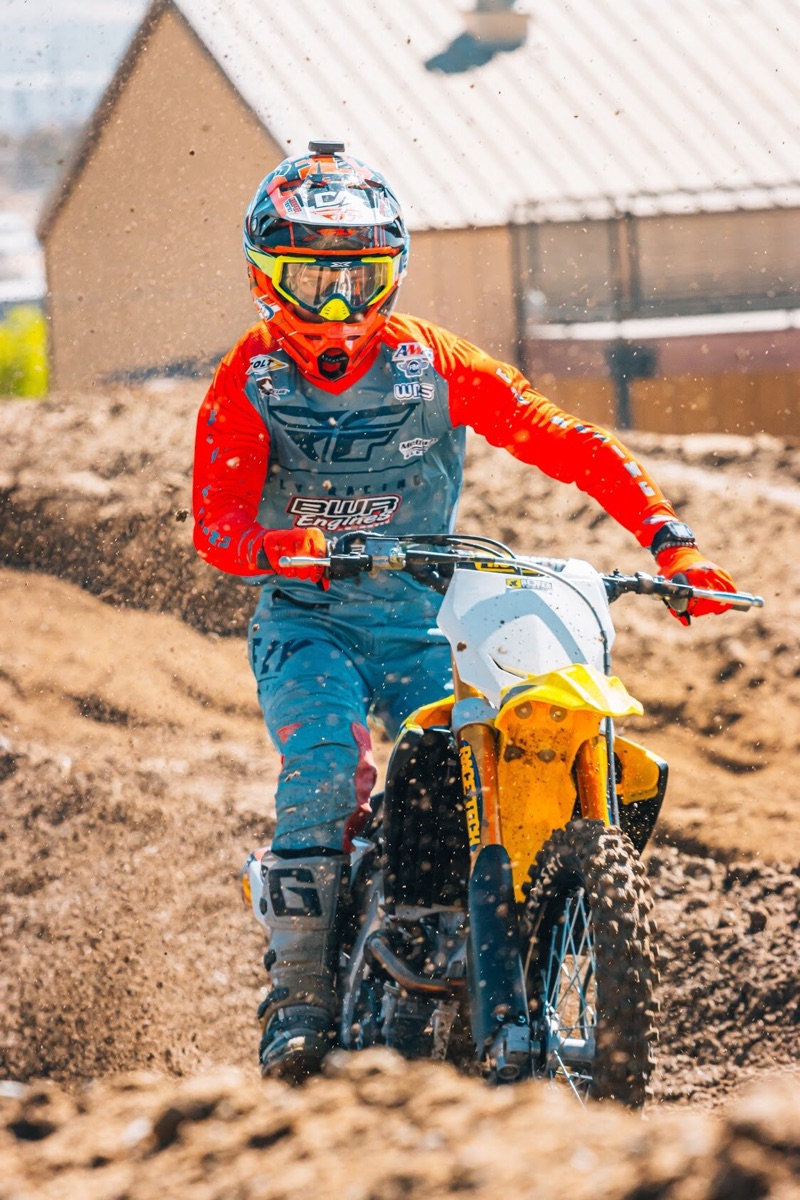 While we had already made a big improvement to the RM-Z power plant, I still wanted more. We’d done just about everything we could without opening up the money wagon to the engine so in order to get some more horsepower as well as save some money, our next move was to send the head off to Race Tech’s engine department. Andrew at Race Tech did a five angle valve job and custom porting to the head. He also gave us a custom mapped Vortex ECU to match the head work they performed. This is something that is relatively easy to do yet can make dramatic differences on the track.

After I tested this machine for a few days I went and asked Andrew a few questions about the mods. He said that on the dyno, the numbers reported a 10% Horsepower increase through the midrange and top end. Dyno’s are not the end all be all of on track facts, but for this test I did have to agree with what the dyno had to say. In stock form the RM-Z makes decent bottom end, but doesn’t do anything exciting when exiting the corner. It has a mid range that feels flat and lacks pulling power on top. In other words I can’t let it rev out too far. I have to short shift, but when I do that the Suzuki still doesn’t have enough recovery to get back into the meat of the power. Race Tech’s head helped the Suzuki right where it needed it and made the spread of power broader and easier to ride. I didn’t notice any increase in bottom end, but I didn’t notice a loss either, which was acceptable to me. 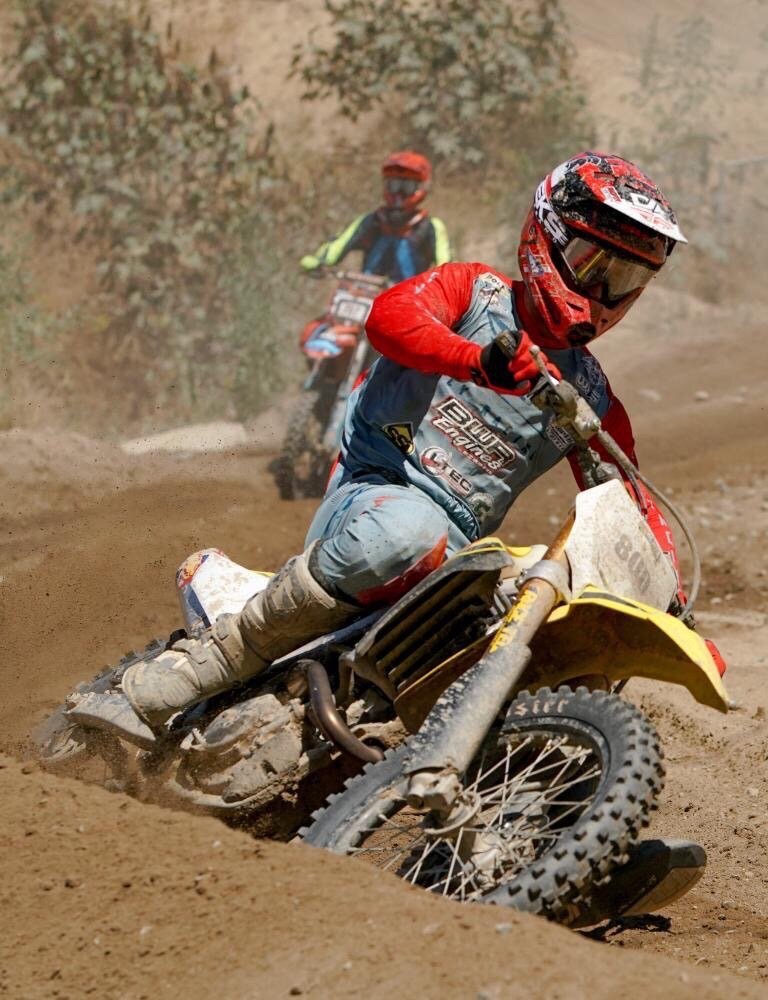 The total cost of the head work and ECU comes in right around $1500, which isn’t a whole hell of a lot, when you’re looking at what you’re getting on the track. That’s only a little more than you’d spend on a full system exhaust, but in comparison I think you get more bang for your buck with the head/ECU work. A pipe can usually improve on the stock engine character, but in this case I feel the head work actually changed the engine character for the better. Being able to use second gear longer through corners helped make this an even more fun yellow bike to shred ruts with. Third gear is still not an option on tight corners, but now that second gear is longer, I am not worried about pulling third so early. I used the stock gearing, but am looking to possible go up a tooth in the rear to see what it can offer me in third gear exiting corners. With the head work and Vortex ECU the Suzuki pulls down each straight farther and has slightly more recovery when I make that mistake. I like that the Race Tech mods gave me the sensation of a more playful yellow zook while keeping the reliability of this machine in tact. Yes, the Suzuki is reliable! I have been riding/racing the crap out of this bike and have experienced zero issues with it. After racing long/fast GP style courses as well as the tight ruttier technical mx tracks, the Suzuki has been easy to work on in the garage.

After we got the motor sorted out, I made a few mods just for personal preference. I’ve been a Renthal guy all my life, but since testing with Keefer, I’ve really begun to like Pro Taper’s SX Race handlebar, so that’s what I chose for the RM-Z. They also sent me their “Twister” throttle tube, which is an aluminum tube with a bearing on the end of it. I honestly thought it was a bit of a gimmick, but I fell in love with how smooth and easy it makes the throttle pull. I’ll be running those on all my personal bikes from here out! The stock seat cover looks grippy, but I found myself sliding around quite a bit under acceleration. Motoseat fixed that problem with a ribbed gripper seat, yet it wasn’t so aggressive where it hurt my rear end after a long day in the saddle.

My personal favorite tire combo is the Hoosier 25S front and 25 rear, so that’s what I chose for the RMZ. I like this combo because the tires have a great carcass feel an have excellent lean angle traction for me. Hoosier has a reinforced sidewall with the “S” models, so if you’re looking for a bit of a longer life span, look at the 25 “S” Hoosiers. Finally Elusive Graphics made it look pretty with a custom set of Keefer Inc Testing graphics.

So now the big question. With the work we did, is the RMZ 250 competitive with the other bikes in its class? Yes and no. Does it have have the bottom end torque of a Yamaha?

It still DOES NOT! Does it have the pulling power and over-rev of a KTM or Husky? No.

The RMZ engine isn’t the best in any category, but with the work that we performed to it, it still can be respectable racing machine without the pricing of the other five manufacturer models.

Where the Suzuki really shines is in handling. It corners as good or better than any bike on the track and it remains predictable and stable at speed after some suspension work. Simply put, it’s easy and fun for me to ride. I still ride at a high level and I would take this bike to race (with these mods) any day. 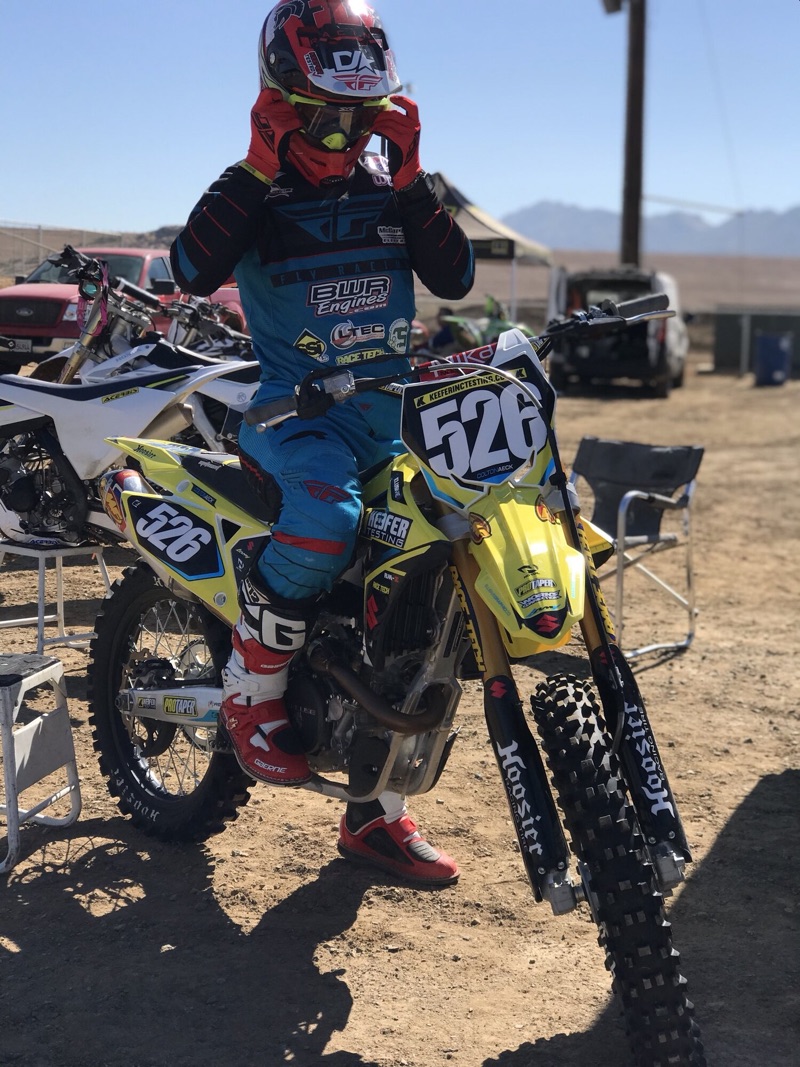 I think it is best suited for a younger rider moving up to big bikes, a novice without a lot of experience or just your average guy who wants a great handling 250F that’s super fun to ride without breaking the bank.

For the serious racer in the 250 class, horsepower is a massive part of the right? Simply put the RM-Z is down on power compared to its competition. Unless you have a big budget for engine mods, you’ll be fighting an uphill battle, but Race Tech helps soften that blow with a reliable head mod that makes more power.

Suzuki has the handling/ chassis figured out. All they need is a faster engine and I think they could be in the running to win shootouts. Only time will tell if Suzuki has the budget to figure that part out, but just know there are modifications to the head that Race Tech offers you RMaRMy members without breaking the bank!

I drilled a 4mm hole in the center of the upper engine mounts (in the middle). On the track it will give you a slightly softer feel through small chop as well as hard slap down landings. What I didn’t expect though, was increased front end bite on initial lean while turning.

It’s a subtle change, but definitely something you all should feel. On hard packed So Cal tracks, it was a welcomed improvement.

Stay tuned to the Keefer Tested podcast in the coming weeks where Kris and I will sit down for a little wrap up on my experiences with the 2020 RM-Z 250.