Renegade SX4+ is a four-stroke powersports race fuel for those who are serious about racing or have engine modifications done that need to coax the absolute most performance out of their race engines. I did a review on Renegade’s MX4 pump replacement fuel and was so impressed with that fuel that I decided to try the SX4+ (for reference, it can be the equivalent of going to VP’s MR Pro 6). Now when I talk to some engine builders that use this fuel, they tell me that Renegade SX4+ burns quicker than Pro 6 and that can mean that the ECU needs to be remapped. For the sake of testing, I decided to try the Renegade fuel against VP’s MR Pro 6 in a KTM 250 SX-F and a Yamaha YZ450F to see if I could feel any difference between the two fuels.. 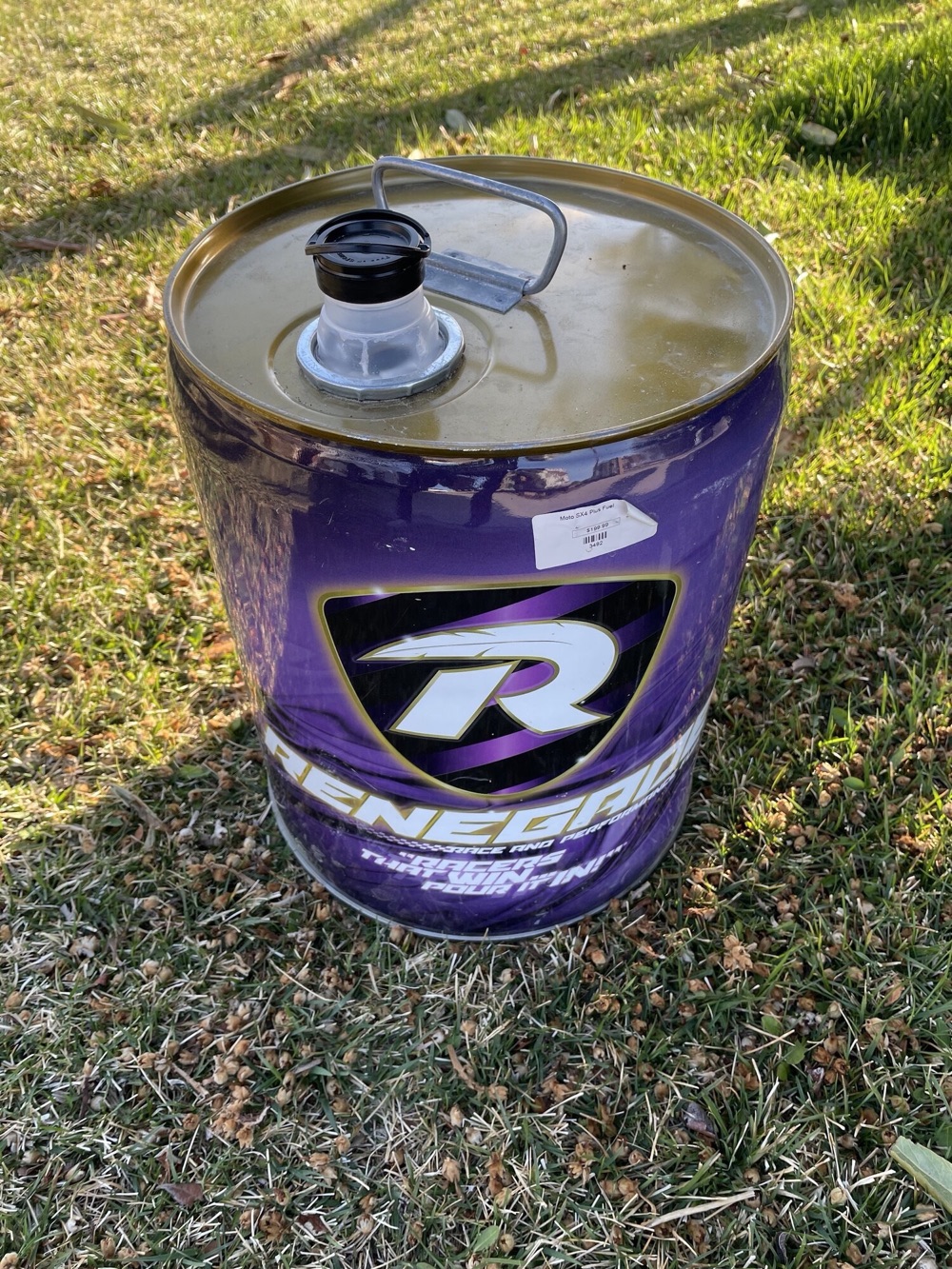 On a 2021 KTM 250 SX-F (with an FMF muffler system and Vortex ECU) the Renegade SX4+ gives me a little more low end RPM response than the Pro 6. I noticed better pulling power down low and an overall feel of just more low end excitement. Mid to top end pulling power felt the same between the two fuels, but once I ran through a couple tanks of SX4+, I could tell that I needed to richen up the ECU setting as well as advance the timing a little. Once we remapped the Vortex ECU for SX4+, I could feel the KTM pull more through the mid range without any de-cel pop. I also noticed that after a 20 minute moto the Renegade fuel was slightly lower (visibly) in the tank than that of the MR Pro 6 fuel. I feel like if you’re looking for maximum gains out of your 250F then the SX4+ is a great fuel to maximize horsepower.

On a 2021 Yamaha YZ450F with a FMF muffler and Vortex ECU, I preferred the VP MR Pro 6 because the Renegade fuel gave me too much throttle response which caused me to not have a much control though my corners. That same throttle response that I liked so much on the KTM 250 SX-F, I didn’t really care for on of my Yamaha. The MR Pro 6 felt like it gave my delivery more control on low RPM situations and to me that was beneficial on the 450. Now since I felt like I had too much throttle response with the SX4+, I decided to play around with the ECU mapping to see if I can tune it out, which I was able to do, but once I tuned the hit out a little, it just seemed to me the SX4+ wasn’t any better than the MR Pro 6 in my 450. To me there was not advantage between either fuel on the track, which meant it was a sideways move for me.

The Renegade SX4+ does deliver more low end rpm response and pulling power, but to me this may only really benefit 250 four stroke riders who want the most front side power they can, or gnarly 450 guys that want more low end. I guess I am not that gnarly of a 450 guy! This fuel is for racers who understand that you will have to get a reputable engine builder to tune your ECU to SX4+, so don’t go thinking that you can just pour S4+ in and enjoy all of its benefits. Simply pouring it in and expecting it to be magical is foolish and you will be wasting your money. However, if you plan on building a race machine and want a fuel that burns clean and quick, the Renegade SX4+ is some of the most responsive racing fuel we have felt. Maybe too good for you 450 riders! If it was me and I was running Renegade Fuels on a 450, I would stick with the MX4 fuel. I typically run MR Pro 6 HT in my race engine 450s for the simple fact that it doesn’t burn as quick as the SX4+ and the “HT” doesn’t boil in hot conditions. This MR Pro 6 HT helps RPM response and mid range pulling power (over standard pump fuel), but doesn’t give you so much hit that it makes that big girl hard to ride! Speaking of boiling, the SX4+ withstands boiling fairly well and I didn’t notice any issues during warm California motos that ranged in the low 90s.

The huge downside to this SX4+ fuel is that it’s expensive and can cost anywhere between $180.00-$200.00 per 5 gallon pale! Ouch! You can check out all of Renegade’s fuel over at www.renegaderacefuels.com.