I have never really had the best of luck with frame tape in the past. Although frame tape works really well, they typically only last one day at the track. I was determined to find something that was better than one ride, so I went searching the internet and ordered up a few different types of grip tape. Instead of writing you up some big article about which tape sucked, I decided to write an article about a gentlemen’s frame tape that I found was good enough, that I would spend my own money on it. I will say it was kind of random because I stumbled upon Corie through Instagram where he suggested I try his tape. After I got Corie’s product and rode with it is when I ended up finding out that he supplies A LOT of other top teams in Supercross frame tape for their machines as well. Corie Barbee doesn’t do this as his job, it’s basically his hobby after he gets off work at his construction job. 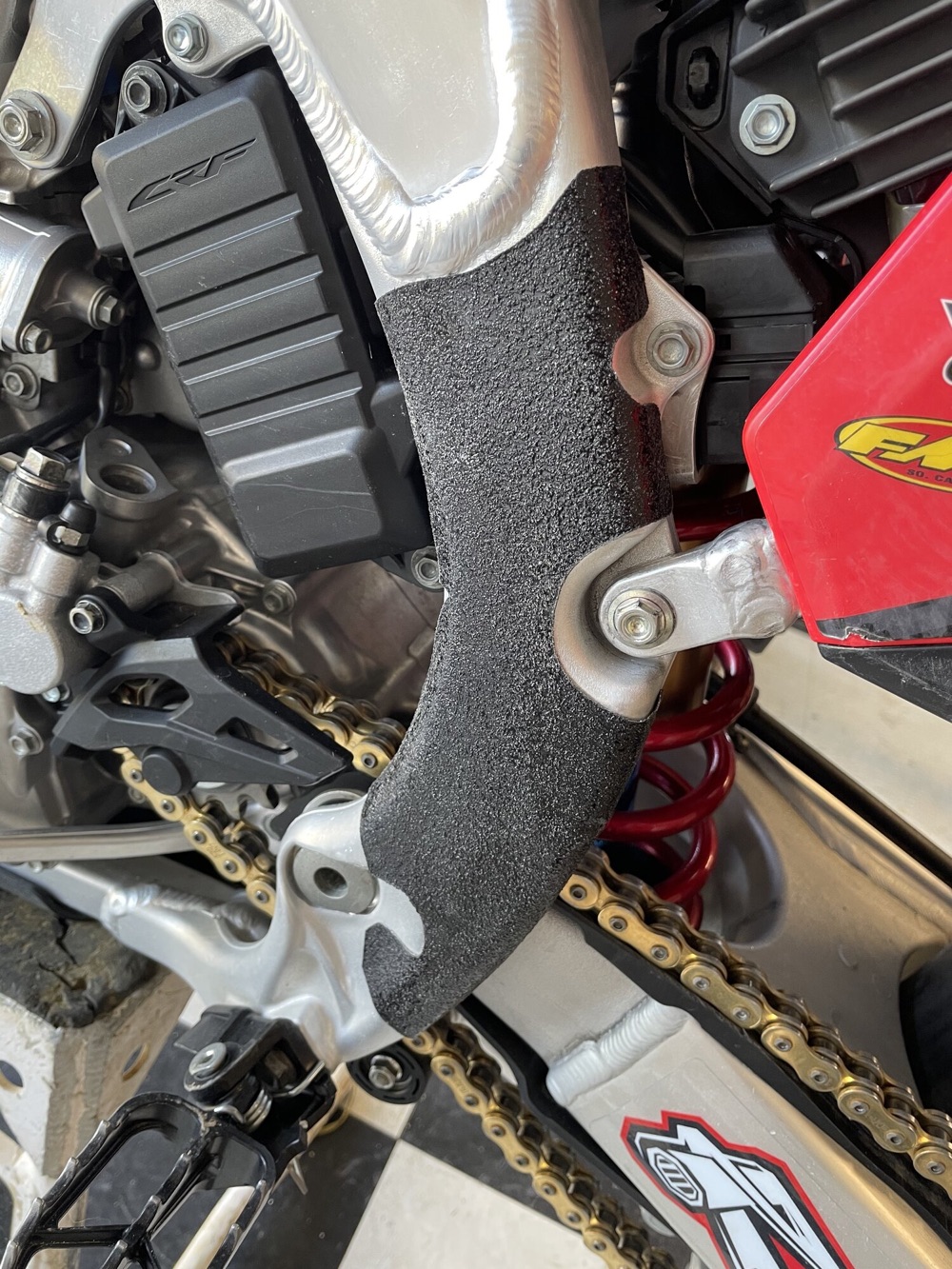 Now that you know a little background about the person behind the product, what is this tape all about? Corie doesn’t use anything magical as his product is a 3M tape that anyone can order online, but it’s the template that makes the biggest difference. The cut is where the magic is and if you end up cutting your own (which I have tried) you have to make sure there are no grab spots or sharp corners that can cause the tape to lift. It’s not actually as simple as it may seem! I don’t have the patience nor the time to do this so I would rather pay someone to cut them out for me. Corie’s cuts were spot on and the two different types of frame tape that I used (on a Honda CRF450R, YZ450F, and KTM 250 SX-F) lasted three to four full days of riding yet when peeled off by hand, it was the cleanest out of all the brands of tape I have tried.

The gray frame tape is a 3M rubber base that blends/grips well with your boots. The amount of grip I had when squeezing each machine made me feel more like I had more contact which gave my arms more of a rest during motos.

The black frame tape is a more aggressive style of tape that has a thin foil backing between the grip and the glue, which worked out well for the KTM’s steel frame. This tape bended around the frame tubing more accurately than the gray tape and gave me a more secure lock in feel than the stock frame guards that the KTM comes with. The only other frame guard that is better than this black tape is the Acerbis frame guards.

In order to get Corie’s frame tape to stick proper you have to make sure to prep your frame properly with contact cleaner. Make sure there is no sticky residue on the frame and that you evenly press down on the complete surface area of the tape. The frame tape aren’t meant to last forever so don’t expect it to last a month of riding. For frame tape to last as long as this tape has is saying something, trust me. All of Corie’s templates are hand made/drawn and he hand cuts every piece of tape individually. If you want to hit up Corie for some of his tape, email him at coriebarbee31@aol.com or 334-312-6138 to order yours. Typically a set of frame tape will set you back $15.00-$35.00. If you’re looking for more grip in between your legs, try Corie’s tape, it’s pretty damn good!