For those of you that don’t like listening to your bike reviews via podcast, have no fear, I have smashed the computer keys for you all, so that you may read what it’s like to ride the 2018.5 KTM 450 SX-F Factory Edition. KTM did a ton of revisions and have even made the bike slightly lighter than it already was in 2018. The frame, swingarm, engine, muffler system, suspension settings and bodywork all have been changed on this 2018.5 FE. Here are more than a few key attributes of the new KTM Factory Edition. 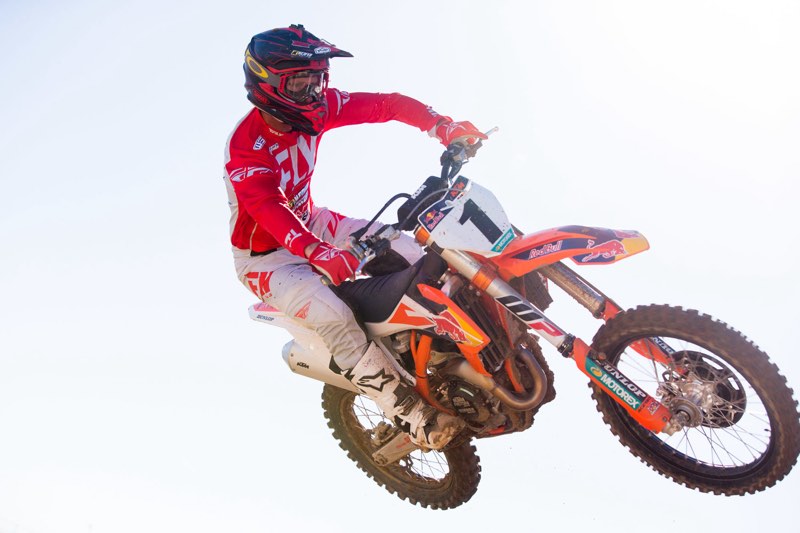 1. Engine: The new Factory Edition engine isn’t that much different than the standard 2018 version KTM 450 SX-F. What you’re getting is a little more mid range pulling power and a slightly added RPM response (on low rpm) increase over the 2018 model. The FE is still silky smooth and has a very linear power, which doesn’t wear the rider out easily like some other 450cc models can. The map switch is a great tool for riders that want a more smoother roll on delivery (map 1) or want a more frisky and peppy bottom end hit (map 2). I prefer map 2 as it’s still linear enough on hard pack portions of the track, but has better “hit” down low to get me out of soft pockets of the track better than map 1.

2. Chassis: This is where most of the changes are felt on the track between the standard 2018 and FE models. The standard SX-F flexes a little too much at times off throttle (de-cel bumps) when the track is tilled deep or very loamy. I noticed this more when I went back east to go race than I did on the west coast. The FE version is stiffer, but not harsher on choppy de-cel. This is important! Stiffer doesn’t always mean harsher! This creates a more precise feel coming into corners and also a better planted front end on the Factory Edition. Did I mention it was light feeling? Well stand by because this new FE feels like its five pounds lighter than the 2018 not one pound. Where you feel this on the track is on tip in coming into corners or on longer ruts. For example, a Yamaha YZ450F feels planted coming into corners, but also takes some effort to be able to lean it over (and keep it there) on longer ruts. The KTM just needs your body positioning to think about leaning over and it does it ASAP. It’s like the FE reads your mind coming into or through corners! Straight line stability is as good as the 2018 standard model, but everything is better on the FE once off-throttle, which I prefer.

3. Suspension: Let’s not beat a dead horse here….You all know I am not an air fork rider, but the WP AER stuff is pretty damn good! Does it have the front end bite of a spring fork? No, it doesn’t. Does the AER fork have mid-stroke comfort? Yes, it does. Now don’t get me wrong, the Yamaha KYB SSS fork is still better, but the AER fork is not that far behind it. Where the AER fork suffers is the consistency over a long day of riding. When I am riding the track at 2PM and have been there all day, the AER fork doesn’t react the same as it did an hour or so ago. It’s not as drastic as it used to be, but I still want a little more consistency in my front end. I am however getting used to how much front end feel I have now with the AER and trust it more than I ever have. It gives me decent front end grip on lean in, but I would like a little more grip on corner exits. Like I said, mid-stroke comfort is good on straight-line and the KTM FE reacts well on braking bumps. The KTM FE WP AER fork does have a little more comfort on the top of its stroke compared to the Husqvarna Rockstar Edition, but I am looking for that supple feel when accelerating while hitting those bumps at speed. I want a little less deflection than the KTM front end has (on acceleration). The shock is quite good on the FE and as usual has a dead feel to it and is not reactive. This is a good thing! Loads of rear wheel traction and less side to side movement on the FE, which gives me a feeling that I can twist the throttle harder and sooner.

4. Ergonomics: The 2018 KTM 450 SX-F had a bend in the shrouds that bothered the crap out of me when I cornered. People complain about the Yamaha YZ450F being fat in the middle, but the 2018 KTM 450 SX-F was as fat in the shroud area (with that bend in it) than the Yamaha. The new FE doesn’t have that fat feeling or that bend any more in the shrouds! Hallelujah! The FE is very narrow feeling in the mid section and you are able to ride up on the tank even better with the lower mounted radiators. The rider triangle (peg/seat/handlebars) is short and tall rider friendly, but KTM needs to cut their bar width to a 801mm spec. The longer spec of the Neken bar gives me a wide feeling when I am cornering. I have cut last year’s handlebars down to 801mm and it gave me an even better feeling coming into corners without my arms going out too wide. You would think 9-10mm isn’t that big of a deal, but once you cut them and see, you will thank me for your new found confidence in corners. The Selle Dalla Valle gripper seat keeps you in place so good that it will eat your ass up! Literally! Seriously guys, I am typing this with Bag Balm on my butt right now. Dear KTM, make the seat a little less aggressive. Thank you, -Keefer’s Ass.

5. Expected Release Date: Eaaaaaaasy tiger, pump the brakes! Don’t expect to go to your local KTM dealer and grab one of these bad ass machines right away. Make sure to talk to your wife about this purchase (I know I may have to as well) first and expect these beauties to be in dealers in early March. KTM only brought 500 of these suckers in so you might want to get that deposit sorted out ASAP. MSRP is going to be around the mid 10’s (yes, that’s ten grand), but to me the extra grand or so is worth it if you were going to buy an 2018 KTM 450 SX-F anyway. To me, the chassis improvements alone is worth the extra money. Basically you are buying a 2019 model in March, look at it that way.

6. KTM Vs. Husqvarna: “Keefer….Isn’t the 2018.5 Husqvarna FC450 Rockstar Edition and 2018.5 KTM 450 SX-F Factory Edition the same bike, but different colors”? That is the question on the heading of hundreds of emails that I get. On paper they are very close, but have differences. Just think of that movie “The Interview” with James Franco and Seth Rogan. “We are same, same, but different”. Here is the deal guys…..The KTM has a different spec muffler, airbox, swingarm, handlebars, plastic and of course color/graphics. They feel different on the track and if you listen to my podcast you will hear Eric Grondahl and I talk about which bikes we prefer. I chose the KTM because it has a little more hit down low, while coming out of corners. Eric chose the Husqvarna because he likes that smoother delivery and feels the front end is more compliant on steeper downhills while turning. The bikes are very close and it wouldn’t matter to me which one I would get, because if I wanted more throttle response out of the Husqvarna, I can drill holes in the airbox and run some race fuel. Boom! Done! I do like the orange color way better, but like I said we are splitting hairs here.

7.  Things That I Didn’t Like: No bike is perfect right? The KTM FE has a long throttle pull. It feels like I have to chicken wing it to get it to the throttle stop. If I want to hold the KTM FE wide open I almost have to do a double twist of the throttle in order to get it to full throttle. I tried the black throttle cam that KTM and Husqvarna offers, but it made it too jumpy rolling the throttle on through corners. However, if I was riding sand or a soft track I would stick with the black throttle cam. If you’re having that problem, look into that option of a different throttle cam. I mentioned the seat and how it eats up my rear end, but it also loses it’s color quick as well. It seems the sun fades the seat cover out within 20 hours of use. I am not a huge fan of lock on grips yet, as I can feel some handlebar stiffness compared to standard half-waffle soft grips. The spokes still need to be checked constantly, so make sure you are on the ball, at the track, with that.

8. Pankl Transmission: Under load the new FE transmission is much easier to shift. Not to say that the transmission on the 2018 is bad, but the buttery smooth shifting is somewhat reminiscent of some factory transmissions that I have spent some time with in the past. Another thing that I noticed that the FE does better than the 2018 is that I am able to find neutral much easier when at a stop, before I put the machine on the stand. While riding I have yet to hit a false neutral, so that is a great thing!

9. Conclusion:  At the end of the day I am very happy with the changes KTM did to the 2018.5 Factory Edition. It makes me smile when I ride it and it opens up the track more for me to explore new lines. When you have a bike that is this easy to ride, with tons of rear wheel traction, is lightweight, it lets you explore options on the track that you normally wouldn’t otherwise. It’s pretty damn cool! KTM sets the bar high for other manufacturers R&D departments and forces them to keep evolving their motorcycles. This is great for all us moto heads out there! Look for more setting tips and tricks as I get more time on this orange number 1 steed. Stay tuned to pulpmx.com and keeferinctesting.com for continual developments with the KTM 450 SX-F Factory Edition.