“Hi, my name is Dominic and I’ve never ridden Supermoto.” That is pretty much how I started my morning, not knowing what to expect when the Husqvarna boys invited us to ride their new 2019 FS 450 Supermoto. As a first timer, I immediately felt like a fish out of water – a “what the hell did I get myself into”, type thing. But, I quickly realized that you can either:

A – Ride super squirrely and be scared the whole day.

So I tried my best at going the “B” route, and holy shit, it was an absolute blast! There is a definite art to riding very aggressively in a road racing environment, and the street editors that joined us (Waheed and Scaysbrook to name a couple) put it to us ”moto” guys in a hurry. I’m actually really happy that they were there, because it allowed me to watch and learn pretty quickly (on-demand training). After watching them burn a couple laps and learning what I could, off I went – attempting 20 minute Supermoto motos’ with a smile that could barely hide under my helmet.

The Supermoto experience is so foreign that it is hard to explain in words. Some of our MX techniques apply, but a lot of them don’t. Cornering is much different, braking is done in it’s own way, and overall rider control (body vs bike) demands a unique style. I tried my best at adapting in my own way, just trying new things each lap to figure out what works and what doesn’t. And once I found a decent groove, I was able to dive into the motorcycle itself and study it a bit for anyone looking to learn about the actual bike, and not my beginner situation.

The bike itself looks sexy right out of the box. It is graced with race-ready Alpina spoke wheels matched to Bridgestone R420 slick tires, and revised bodywork that looks down at a massive Brembo front brake system. I was told that it is the same system used on the current production Ducati Panigale. The other 90+% of the FS 450 practically replicates the motocross model. The suspension is obviously tuned differently, it has different offset triple clamps, and most importantly, a full blown slipper clutch. Lastly, Husqvarna put some useful wrap-around hand guards on the bars and an updated (more comfortable) seat. I truly feel that this bike is race-ready. We all know that the orange & white brigade boast that motto, but the FS 450 really showcases it well.

On the track, the 63 horsepower motor is at your disposal whenever you are ready. The bike does not hesitate in getting you to the next corner quickly and efficiently. Nor does it take much for that front wheel to lift off the ground, which made the FS 450 really exciting to ride. The slipper clutch system is also a major talking point.  This clutch allowed us to drag the bike into corners, (attempting to back it in) without getting any rear-wheel chatter. I was shocked to realize just how much rear brake I could use without it heavily effecting rpms/power. I now realize why having one of these systems is a must if you are a serious Supermoto rider. As always, the Brembo brakes did not disappoint as they provided ample stopping power in any scenario. I assumed the front brake was going to be incredibly aggressive, due to the size of the rotor and caliper, but I was wrong. It is very modular (or progressive) and allows you to maintain control when traveling at varying speeds. As for the suspension… here is where I cannot help anyone, because I do not have the slightest idea of where to start tuning a Supermoto set up. I will say that down the fast straights, the front end would get some head-shake. If/when I get to ride this bike again, that would be a focus for me to settle that down right away. 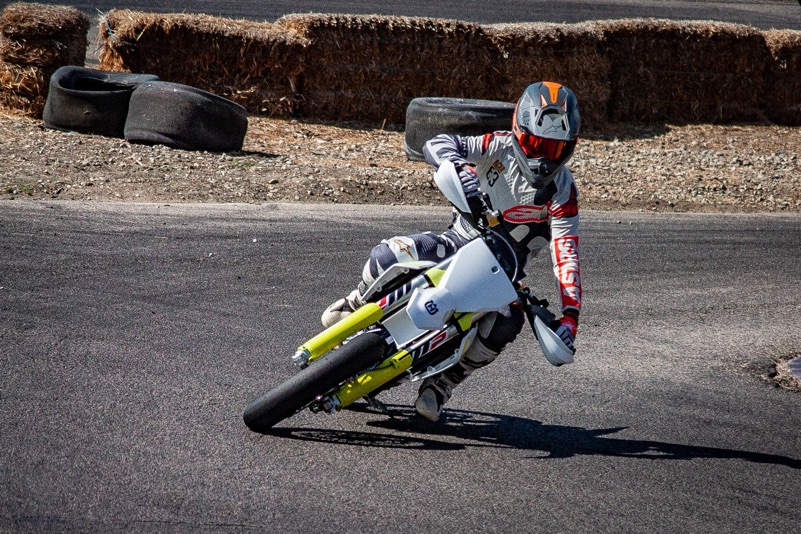 To wrap things up on the 2019 Husqvarna FS 450 Supermoto intro, all I can say is I would love to do this again! Having no expectations coming into this test day, it was so refreshing to be dealt with smiles all around, super close take-out scenarios on the track, and most notably, really fun battles with a few other guys I could actually hang with. If any of you reading this are interested in at least trying Supermoto, I would definitely recommend it. I rode all day in full motocross gear, but I think leathers would make me feel way safer. As for the million dollar question – would I buy this bike? Currently, I would say no – based solely on the fact that motocross is encompassing my life at the moment. On the other hand, if I was serious about riding Supermoto, there would absolutely be no question in my mind that this would be the bike to have. It has everything you need to not only indulge in the experience, but race competitively if push came to shove. If anyone reading this has more specific questions regarding this motorcycle (detailed specifications) please email kris@KeeferIncTesting.com and I will facilitate getting any questions you need answered. As always, I appreciate you taking the time to read this! Stay tuned for more fun things coming your way here at Keefer Inc. Testing