If you’re on a budget and are happy with your pump fuel, just continue on with your day and don’t worry about this review. There is nothing wrong with pump fuel (unless you’re from California then you have ethanol problems). However if you do have some extra cash and want to see an improvement in your engine’s power delivery, continue to stick around and read all about VP’s MR-Pro 6 racing fuel. MR-Pro 6 is an unleaded fuel engineered to generate maximum horsepower in four-stroke applications while still conforming to the AMA rules for lead and oxygen content. MR-Pro 6 delivers more power (than pump fuel), thanks to its carefully formulated oxygen and octane content. It requires some jetting/mapping changes and also require some 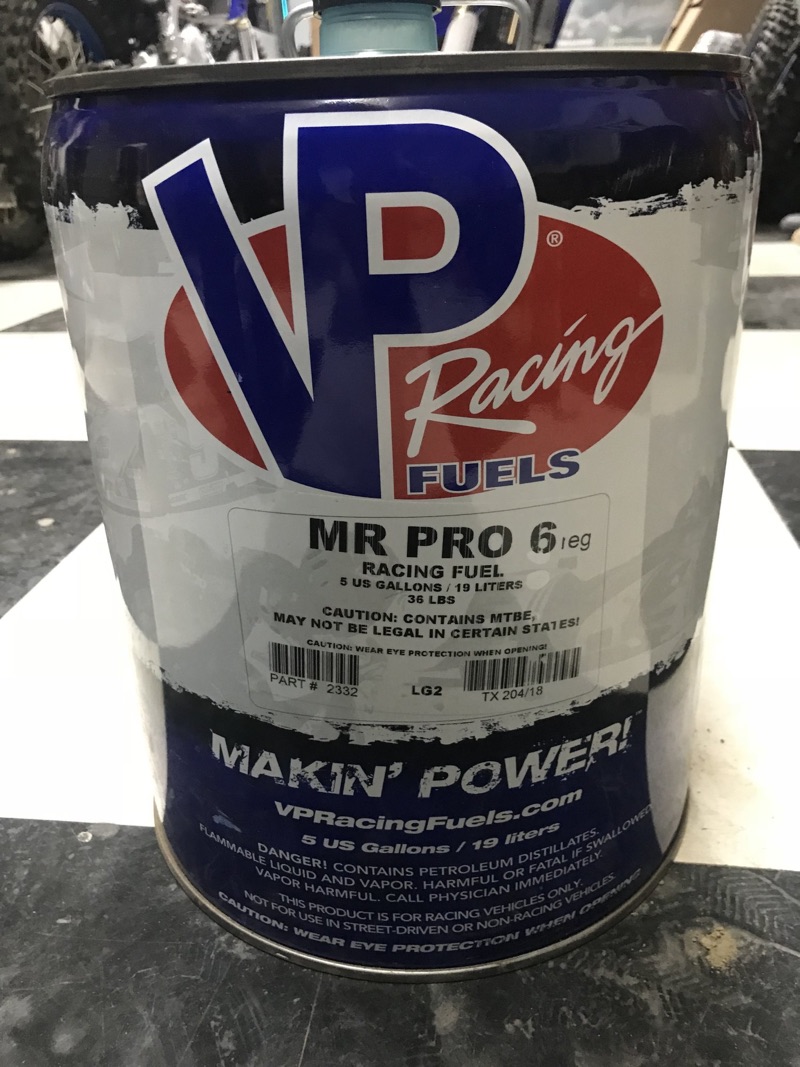 I have been testing the 2019 KTM 450 SX-F and 2019 Yamaha YZ450F a ton lately with aftermarket ignitions. With these ignitions you are able to have increased parameters and can really tune in a bike’s power delivery. To aid in some of this delivery, race fuel becomes very important, so I have been using VP’s MR-Pro 6 in both machines. Now before I tell you how it performed with these aftermarket ECU’s let me start off by saying that you “should” map your ECU for MR-Pro 6, but for testing purposes, I tried the VP fuel with a stock ignition without a re-map. By simply pouring in the MR-Pro 6 into your stock steed, you will see some benefits like increased throttle response and more bottom end. However if you’re spending anywhere between $130.00-$180.00 a pail, you will want the most out of your money. Simply pouring this stuff into your bike isn’t going to blow your mind with its performance on the track. Don’t waste your money!

If you want to really benefit from VP’s MR-Pro 6 get your stock or aftermarket ECU re-mapped for this type of fuel. Once mapped you will feel all of the benefits of some good race fuel. You will notice you will have even more RPM response, bottom-mid range pulling power, and an increase in peak horsepower (over-rev). Even with a stock ECU (that is re-mapped for MR-Pro 6) I get all of these positive affects, but with less top end/over-rev.

With a GET or Vortex ECU and MR-Pro 6 the difference is huge on the track. I have spoke about the importance of ECU settings and what they can bring to modern four-stroke technology in my podcasts. It’s huge! MR-Pro 6 gives you an increase in horsepower everywhere on the track and gives your four-stoke a crisper throttle response that makes your machine feel slightly lighter feeling on the track. Yes, fuel with an aftermarket ECU CAN DO THIS!

One downside to the MR-Pro 6 is that it can boil when the temperatures rise. I had better luck in the summer months with ETS Racing fuel than I did with MR-Pro 6. You will notice if the fuel starts to boil because you will feel the machine start to run dirty (or rich) feeling (and you will lose a lot of throttle response). In the winter months or on cooler days I have had no problems with MR-Pro 6 boiling. ETS was just more consistent when the temperatures were high.

If you’re looking for increased horsepower and throttle response, VP’s MR-Pro 6 is a huge advantage over many other unleaded race fuels out there. Just be sure to store it somewhere away from your living quarters because the MR-Pro 6 is pungent. The smell is quite strong and can really make your wife or neighbors mad.