KEEP KIDS ON DIRT BIKES NOT THEIR PHONES!!! It’s known that kids are the future of the world, and what better way to raise those kids than on a dirt bike right? The 2018 YZ85 brings big-bike performance to a small package, all for $4,299 of mom and dad’s hard earned blue collar money. The Yamaha has 33-inch seat height and 157-pound overall weight so make sure your little guy or gal has some biceps on them. The YZ 85 package may not be small, but depending on what your kid is looking for, may be the perfect amount of punch to haul them around the track or trail. My 12 year old son Aden is a novice moto kid, is 81 pounds, 5’0 tall and loves dirt bikes. He has been riding gas powered dirt bikes since he was eight years old and has put a ton of hours on the the Yamaha YZ85 over the course of several months. 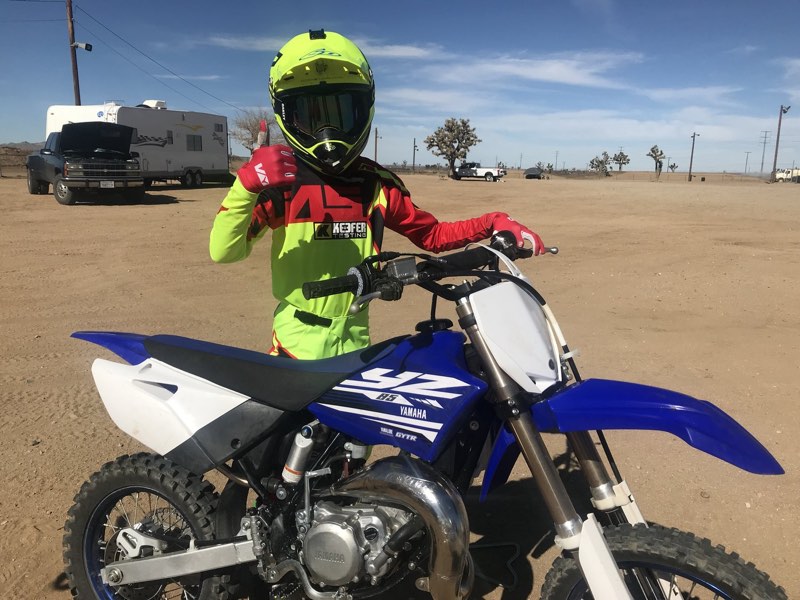 The YZ package has been around since 2002, but the bike got a clutch and transmission update in 2014 and then a new cylinder, bodywork, and clutch lever in 2015. The Yamaha is the only two-stroke that does not have a power valve, which shows up in less-broad power.

The Yamaha’s engine has somewhat of a weak low-end, but once into the power the blue bike pulls hard. This can be a problem for beginner or novice type riders as there is really no smooth transition from bottom to mid range.The Yamaha needs more clutch effort out of corners to get up in the revs and more shifting to stay in the mid and top-end, but Aden said that once he was in the middle to upper range the bike was fun. It was the low end that was difficult to manage at times for him, especially when he got tired. Jetting is slightly rich off bottom in stock trim, which can be ok for slower riders to help make that sudden “hit” less intimidating, but we raised the clip portion up one to clean some of that bottom end up. Aden found the shifting was smooth and I never viewed him missing shifts or hitting false neutrals while trying to pin it around the track.

The fork and shock soaked up bumps for my 81 pound red head and seemed to work great in both high and low-speed tracks we ride at. Aden described the suspension as like pillows over bumps. I kept an o-ring around the fork to see how much travel he was using to monitor if I needed to stiffen or soften the compression on the fork. Upon inspection, we kept the forks clickers stock and overall the suspension looked to have a very dead feeling when Aden rode it. Interesting note with the suspension: I tried making some changes to the fork to see if Aden could feel the difference, but he usually came back with “ I don’t feel anything”, so I went with what I saw on the track and left the fork alone. Aden praised the YZ’s cornering ability and thought it was very nimble (despite the weight on paper) when practicing his butt whips over some kickers. Straight line stability is superb on the Yamaha under acceleration and braking bumps. Aden never really was out of control on the YZ85, but dad also gets on him about being safe, so make sure to reiterate that to your child as well. Aden did complain about the brakes being somewhat soft/spongy when we picked up the Yamaha, so we bled both ends and that gave a better feeling around the track. The overall feeling of the YZ85 is a low and compact machine when riding and inspires confidence to try new things on the track. Aden liked his sag set at 84mm as that left him with a balanced feel around most tracks. This is more of a preference thing, but a good rule of thumb is to keep the 2018 YZ85 at around 80-85mm of sag. The cockpit is roomy that seems to be meant for taller kids and wasn’t  cramped for the 5’0 length of Aden.

The durability of the 2018 YZ85 is superb just like its bigger blue counter parts, but the clutch is one thing to watch out for. As Aden started to get a little more aggressive with the clutch, the lifespan of the plates went downhill. I changed out a clutch twice in a matter of 15 engine hours, so make sure to listen to your kid while riding to see if you can hear it slipping. Hinson and GYTR make clutch kits for the YZ85 that is stronger than stock and will last longer for your child’s clutch happy finger. Besides a clutch all we did was change air filters, transmission oil, grips and tires for the 35 hours that we have had the YZ85. The little blue ripper is a reliable piece of machinery for any young child to have fun on.

Extra Credit: We installed GYTR’s pipe and silencer combo on the 2018 YZ85 to see what it does to the power curve. Installing this pipe and silencer combo actually smoothed out the power down low (less of a light switch feel), but increased the mid to top end pulling power. In order to test this out dad had to get his 170 pound butt on the seat and do it himself, but I was able to feel the power character change immediately. If you are looking to smooth out the low end feel of the Yamaha’s power valve-less engine, the GYTR pipe and silencer could be a great choice. You can check out all of Yamaha’s hard parts over at shopyamaha.com or visit Yamahamotorsports.com.

Extra Extra Credit: We also tried a out a Bills pipe and silencer on the 2018 YZ85 to see how it compared to the GYTR version. The Bills pipe and silencer combo is a more race oriented package with more of a hit. If you’re looking for more bark down low and crisper throttle response, the Bill’s combo does just that. Bottom to mid RPM response was increased and the bike sounded like a miniature 125! It barked! However, it didn’t rev out quite as good as the GYTR version on top end. Mid-top end performance was slightly better with the GYTR pipe/silencer, but Aden liked the looks of the cone pipe on the Bill’s better than the GYTR. Kids these days, I wonder where he got that? You can visit billspipes.com to check out the Yamaha YZ85 cone pipe/silencer.

If you have any questions about the 2018 Yamaha YZ85 feel free to email me at kris@keeferinctesting.com