It’s no secret that the 2018 Yamaha YZ450FX is a close brother to Yamaha’s 2017 450F motocross bike. That being said, I think most riders would be surprised at how good of a job Yamaha has done turning a great moto bike into a great off-road bike. With no major changes to the 2018 FX model aside from the addition of blue wheels (which look awesome) and different graphics, the FX has proved itself to be one of my favorite all around bikes to ride. For me this bike doesn’t do any one thing perfect, but does a multitude of off-road duties pretty darn close. 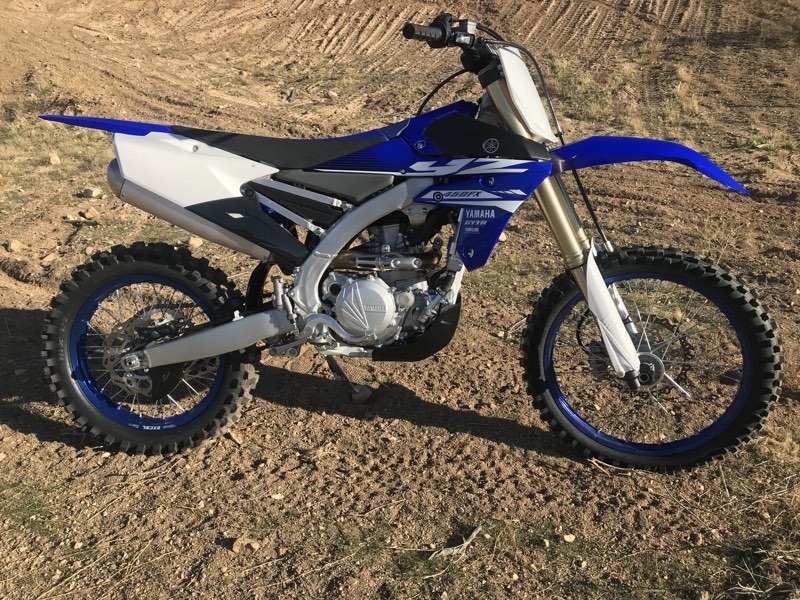 The Yamaha is well known for having one of the most powerful four-stroke engines (250cc or 450cc). Yamaha has done a great job walking the tightrope between having a lot of power and making that power rideable on the FX. The only time the power is touchy is just off idle when riding VERY slow in first gear coming on and off the throttle. Other than that slight jerky feeling, Yamaha mapped the FX so that the bottom end doesn’t have as much of an abrupt surge of power when the throttle was cracked like its motocross brother tends to have at times. That being said, the FX is no slouch, the majority of the meat is made from the bottom to the upper mid of the RPM range. When revved, it still makes power, but the most of the pulling power is made in the mid-range, not when it’s near the rev limiter. Another aspect that makes the FX better off-road than the YZ-F is that first through third gears are slightly shorter and fifth is slightly taller than the moto model. The lower gears really help when lugging through tighter trails by not forcing the rider to fan the clutch to keep the bike from stalling. When I said that fifth gear was taller I meant it! When fifth is wound out I found that in STOCK FORM the FX will go 101MPH! I doubled checked this on a GPS and found it to be true!

When it comes to off-road suspension, I’m a huge fan of spring forks for a few reasons. Let’s get real, no one wants another “chore” to do when getting ready to ride by having to check their air fork pressure. Second, because it’s no secret that air forks pump up when ridden for extended periods of time and when you’re on a long ride or race you want a consistent feeling fork. You don’t want something that will pump up and get harsh in an hour or two right?  The KYB SSS spring fork are the most comfortable and for me reliability/durability are huge advantage because most off-road guys don’t buy a new bike every year. The KYB SSS fork on the FX is a bit softer than the moto bike and to me it’s a bit soft in general. There is a slight springy/fast feeling when hitting g-outs or chopping the throttle. When I chop the throttle the front end tends to dive and there is a lot of pitching going on with the FX. However, the springy sensation gives the slightly heavy bike (262 lbs. wet) a lighter and fun feeling when riding in the rocks or just messing around. To me the KYB fork is slightly softer than the shock, which didn’t give me as much of a wallowing sensation as the fork. I ran the shock sag at 104mm with good results, but if you feel if it’s too soft on high speed hits try 102mm. Make sure to leave the fork flush as this is the happy spot for the Yamaha’s chassis to be most balanced. You don’t want an enhanced diving sensation and that is what raising the fork up will do. I think for most novice to intermediate riders the suspension is just a few clicks away from being really good, but for expert to pro riders, stiffer fork springs would help with the slightly soft feeling forks.

Some people who ride the Yamaha say that it feels big or girthy in the mid section, which in some way I can understand, but for me that isn’t always a bad thing. The FX is maybe a bit big feeling, but that translates to a stable, planted feeling at higher speed, which is a huge plus. I will gladly take a bike that is slightly harder to corner in tight terrain, but stable at speed, over super nimble bike that is twitchy at speed. When it does come to cornering I feel like the FX has a slightly vague feeling in the front end and at times in softer terrain, wanted to push. In flatter turns the FX is very predictable and I found it easier to slide and steer with the rear of the bike rather than the front. In the past the FX came with Dunlop AT-81 tires, which I’m not a huge fan of, but with Dunlop MX-3S tires mounted front and rear the Yamaha got a bit more front end traction than the AT-81 tires of the past. Some other off-road parts that Yamaha incorporates are an e-start, kickstand, 18” rear wheel, larger 2 gallon fuel tank, skid plate and a o-ring chain. It may be the hard core off-road rider in me, but I feel like any bike marketed as “off-road” should come with hand guards. Sadly, Yamaha does not. Another thing I feel like the FX is missing is a stock spark arrestor; I know it’s meant for closed course off-road racing, but a lot of closed course events require a spark arrestor (especially in California).

After over 100 miles of trail riding on the 2018 Yamaha YZ450FX I’m super impressed that they made the motocross bike into such a good off-road machine. For west coast racing the FX seems to be the prefect mix of speed and stability and that is what most guys out here are looking for. I’m sure the slightly bigger feeling and extra technique it takes to maneuver the FX in tight conditions could be remedied with different off-set clamps or even an engine relocation kit form DRD. We will be trying some of these things soon to see if it helps in tighter conditions. The FX has been so fun to ride it may help bring me out of vet class retirement. –Michael Allen

If you have any questions about this test please feel free to email me at michael@keeferinctesting.com