If you have kept up on my social media channels (@kkeefer120, @keeferinctesting) you will know that I have been riding the crap out of the 2018.5 Husqvarna FC450 Rockstar Edition and 2018.5 KTM 450 SX-F Factory Edition machines. I enjoy riding these two machines because they are easy to ride, well balanced and feel extremely lightweight when cornering. I do however wish they had some more RPM response and low-end excitement. Since the new Husqvarna RE’s and KTM FE’s are not coming with an aftermarket muffler this year I wanted to get my hands on FMF’s version as soon as possible to give you all some feedback, just in case you wanted to add some more bling and possible horsepower to your new machines. 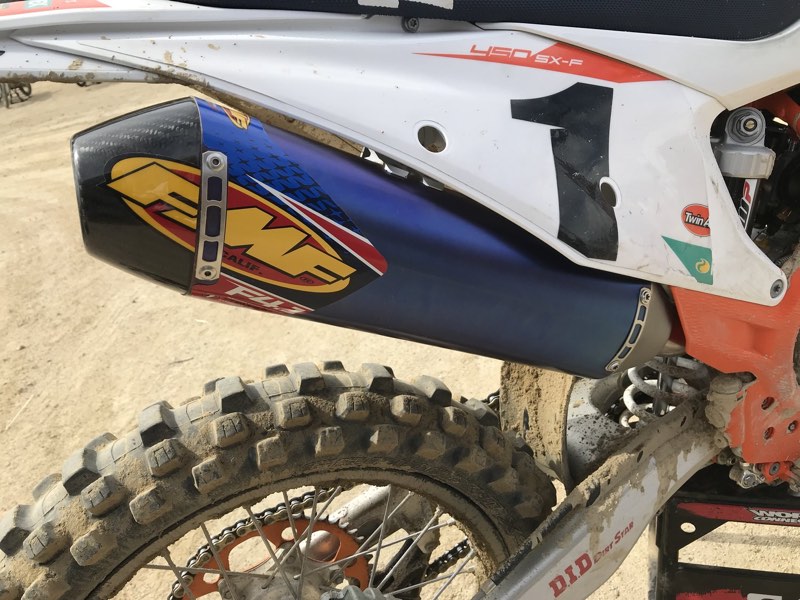 The new FMF 4.1 RCT Full Titanium Muffler System that you see here will fit on either your 2018.5 KTM Factory Edition or your Husqvarna Rockstar Edition. The FMF 4.1 system went on easy on both bikes and took only a few minutes to install. Thank you to Husqvarna and KTM for making the new bike much easier to change a muffler. Gone are the days of dropping the shock and cursing in the garage just so you could get your new muffler system on. I tested the FMF 4.1 muffler system at several tracks on both bikes and had similar results at each track I tested at. In stock form the KTM Factory Edition has a little more throttle response and bottom end pull than the Husqvarna Rockstar Edition, but the RE pulls slightly longer up top.

With the FMF system installed you will not be getting increased bottom end pull on either machine (compared to stock), but you will be getting a little more bottom and mid-range RPM response (or throttle crack for you not testing type readers). I noticed the added RPM response more on the Husqvarna, especially on low RPM, out of corners. The FMF system makes each machine’s engine character slightly more free-feeling and exciting. I also appreciate that I am not getting any added de-cel popping (or lean sensation) with the FMF system and both bikes ran just as clean with the FMF system on than it did with the stock muffler. Where you will notice the most improvement with the FMF system is through the mid-range. The mid-range “meat” you will get out of the FMF 4.1 system is downright impressive. Rolling the throttle on out of corners and accelerating you will notice an increased pulling power that wasn’t there with the stock muffler on either machine. Whether you’re coming out of a corner in second or third gear you will notice some extra horsepower getting to the next obstacle. With the added mid-range meat of the FMF system it really helped some of the gearing issues I had at tighter, less flowy tracks I tested at. Gaining some mid-range let me use third gear in some corners that was tough for me to decipher which gear was better. With the stock system I would roll into these corners in second gear and have the right amount of “pop” to get me out quick, but I had to shift early once exited, to keep the rear wheel from spinning. Third gear was too tall of a gear to get me out of the corner quick, but provided less wheel spin on the exit, so it was always a struggle for me to decide on which gear to use when being pressured from behind by another rider. With the FMF installed I could easily use third gear and have enough “pop” to get me out of the corner in a hurry, yet it kept the wheel spin to a minimum by being able to use a taller gear. So basically what I am saying is that FMF’s 4.1 system made me think less and twist the throttle harder, something I like doing. I didn’t get any more top-end with the FMF installed, yet it didn’t take any away from either machine. I did notice slightly less over-rev with the FMF system (from stock) when I got lazy and tried to wring each machine’s neck out in second and third gear. I don’t mind not gaining anymore top- end and losing a touch of over-rev with these two models, because they are one of the most powerful engines in these ranges. I am not looking to own a top fuel dragster here.

You have heard me say it time and time again that it’s tough to beat a stock muffler system these days. You see more and more after market companies taking the time to release their new model systems because it’s not that simple to make a muffler system better than stock. FMF made their new 4.1 RCT titanium muffler with Mega Bomb Plus headpipe not only better through the mid-range, but a full pound lighter on the scales as well. If you just purchased your $10,000 plus Husqvarna RE or KTM FE and still have $1099.99 burning a hole in your pocket, I approve of this new system Lil D and the boys over at FMF developed. Head over to fmfracing.com or give them a call at (310) 631-4363 to see when this system will be available.