Sometimes deciding between a bike can be a difficult thing to do. We get a ton of emails on which direction you all should go when deciding on either a 2018 Honda CRF450RX or a Yamaha YZ450FX. Since I am the resident off-road test rider here at Keefer Inc. I wanted to take both of these hybrid off-road/moto machines out to a couple of my favorite test spots to see how they stack up against one another. The terrain we tested on varied from sandy hill climbs, to slick, wet rocky canyons, as well wide open desert. Yes, we know this isn’t relevant for you east coast riders, but maybe you east coast guys can at least get a direction on what each bike’s character is by reading this. 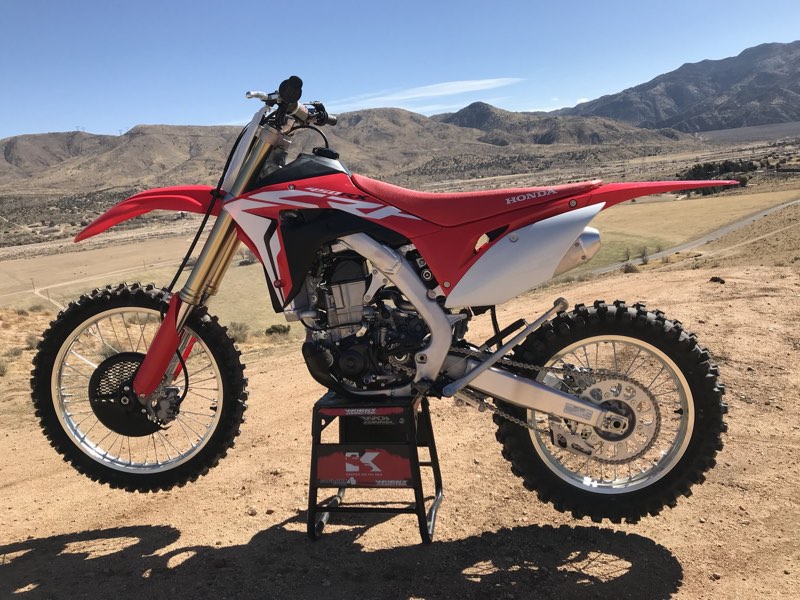 Starting with the engine, it took me some time to realize that “more bottom end”, can have two different meanings on paper. For example, the Honda CRF450RX has a “more” exciting bottom end power than the Yamaha. I say this because as soon as you let the clutch out (from a stop in all three maps) there are gobs of instant power and torque available. This all sounds good, but I found that a lot of the time there is just too much power delivered to the rear wheel too quickly (needs more flywheel), which results in one of two things. Either the front end will come up out of corners, or the engine would stall which made the bike have a somewhat jerky, on/off feeling when trying to use the bottom end power. This was an issue that I had time and time again, causing me to really cover the clutch and make sure it was properly adjusted. Yes, that’s right! Adjusted! If the clutch was adjusted even slightly too loose, it had a tendency to drag when engaged, which was just enough to cause the bike to stall at times. Another downfall to the clutch was the cancel switch (inside the perch) that doesn’t let the bike start without the clutch being FULLY engaged (lever damn near on the bar). If I stalled the Honda on the trail, I would try to just pull in the clutch with one or two fingers to re start it. However, I found out quickly that my other fingers that were on the bar wouldn’t let the clutch in far enough to engage the switch. When this happened I had to re-adjust my fingers on the grip in order to re start the bike. I realize that this is a total first world problem, but it was magnified by how often the bike stalled in technical terrain (note: changing maps didn’t seem to affect the stalling issues I had). Now that all the negative stalling talk is out of the way, once into the revs a bit the Honda has a very fun “racy” feel. When powering through sandy corners or climbing long, steep hills the power plant on the RX is amazing. The engine is fast revving, and has a very meaty feel when pulling through the rpm range. Unlike a lot of 450cc machines, the RX doesn’t mind being revved, and makes strong pulling power all the way to the rev limiter. This very powerful “racy” feeling is a lot of fun for an hour or so (think GP racing) but on a 2 plus hour trail ride it can get a bit draining having to ride the bike so aggressively. It doesn’t like to be cruised down the trail at a leisurely pace, it wants to be flogged, and rewards a more aggressive riding style. I think if you put a heavier flywheel weight on the CRF450RX this could be an even better off-road type machine.

Back to my “more bottom end” statement, when it comes to the Yamaha, I would say that the FX has “more” bottom end pulling power (but less excitement). Let me explain; as previously stated, the RX has gobs of power as soon as the clutch is let out and in my opinion for true off-road conditions this isn’t ideal. On the FX, when the clutch is released there is a smoother application of power that is transferred to the rear wheel (more traction). This heaver flywheel feeling results in needing less throttle to get the bike going, smooths out the bottom end making the bike easier to ride and takes less energy from the rider. This same feeling results in much less stalling when riding technical rocky trails. When the trail opens up the FX engine feels very free revving, but unlike the RX, the FX likes to be ridden more in the midrange of the rpm. Not to say it can’t be revved out, that’s just not where the “fun” power is. When the FX engine is revved out, the on-off throttle modulation is more noticeable and caused a slight seesaw (pitching) motion from front to back. This could be partially due to the slightly soft fork spring, but we’ll touch more on that later. After spending many hours on both bikes I can say that in the engine department, I feel like Yamaha did a slightly better job at turning their motocross engine into more of an “off-road” friendly power plant.

When it comes to off-road suspension, it’s obvious that standard motocross settings on either bike wouldn’t be suitable. Both bikes come equipped with spring forks (thank god), but that’s about the only thing they have in common. The Showa 49mm fork on the Honda is clearly aimed at performance over trail riding comfort (after all these bikes are technically closed course race bikes). This doesn’t mean that there’s isn’t any trail riding compliance there, it means that the fork on the RX is a bit harsh in the initial part of the stroke. I mainly noticed this in rocky areas of the trail when smaller rocks just appear at the top of the dirt. These conditions make the Honda’s front end deflect at times when I was at trail riding pace. Now if I was to charge through the same section with some speed and aggression, there was less deflection. The RX has great bottom resistance and feels balanced front to back, a little harsh on small stuff, but balanced nonetheless. The shock on the Honda has a firm feeling, but has slightly less harshness than the fork while keeping good bottom resistance.

The Yamaha’s KYB SSS fork is much more trail compliant (softer feeling) than the RX and moves more in the stroke. When out for a trail ride there is minimal deflection and the front end has a very stable feeling. In small chop the front wheel stays planted, but when you start to really ride aggressive the fork starts to show a slight weakness. When being pushed hard, the fork rides slightly low in the stroke and blows through on g-outs and hard landings. It also has a diving feeling when the throttle is chopped (de-cel), or when hard on the brakes entering corners. Where the Honda has a firm balanced feel, the FX has a slightly unbalanced feeling as the fork moves in the stroke more than the shock. I know the fork would benefit greatly from a stiffer spring, which would bring the bike back into balance while still giving a ride aimed towards comfort. When comparing the suspension on the two machines, it’s really going to be what the rider prefers. For me I like the FX suspension overall due to the fact that it’s more comfortable to trail ride, and with a stiffer fork spring it would have better balance. The Honda suspension is good, but definitely rewards the rider who is aggressive and pushes the bike. I am usually not pushing unless I am racing and would prefer more of a comfort setting.

Off-road riding can be so diverse in terms of terrain when compared to motocross. These bikes do different things well and in my opinion they cater to different rider/racers. The Honda feels slightly shorter and taller than the Yamaha (which is contrary to the dimension numbers) and that creates a nimble feeling when riding. In tighter terrain the RX changes direction quicker and with less effort than the FX. The RX is a front-end steering bike and with minimal input it will turn into tighter corners with ease. Where this nimble feeling isn’t as good is at higher speeds, which is when the RX has a slightly nervous feeling in the front end. When it comes to the FX, it takes a bit more input in tighter terrain to change direction and can feel heavier (which it is 262lb compared to the RX’s 257lb). On the other hand, the FX gives the rider a lot of confidence when being ridden at higher speeds. The FX is more of a rear end steering machine and takes a little more effort to lean into tighter corners. Although by the numbers, the RX has more rake and a longer wheelbase, but the FX feels as though it’s more planted and comfortable at higher speeds. In terms of amenities, both bikes are basically identical; both have e-start, an 18” rear wheel, skid plate, kickstand, larger fuel tank, and off-road mapping. The clutch cancel switch on the Honda will not let the bike start without the clutch in period. On the Yamaha the bike needs the clutch pulled in to start unless the bike is in neutral (although most riders will disable these features as soon as they get their bikes). A cool feature that Honda has on the bars of the Honda is a mapping switch cluster button. This button shares the kill switch and gives the rider three different mapping options; standard, smooth and aggressive. They do indeed slightly change the power characteristics of the bike and it’s also cool that the maps can be changed on the fly. While the mapping options are cool, I feel like Yamaha went a step further by changing 1st, 2nd, 3rd, and 5th gears to better suit a wider range of off-road riding and racing.

When it comes down to it, these are both great bikes, but they will cater to two different types of riders. The RX is all about power, aggression and speed making it a great choice for faster riders who race more moto style, WORCS, or Big 6 GP races. While on the other hand the FX is a better do it all bike for the guy who trail rides just as much as he races. Being that its stable at speed the FX makes a great desert race bike (proved by NHHA champion Gary Sutherlin), and can also hold its own in GNCC racing where smoother bottom end power is a must. There are two things I’d like to see come stock on both these bikes. The first thing is handguards, maybe it’s the off-road goober in me, but the first thing I do when I get any bike (off-road especially) is put a set of handguards on (I’d do full wraps if I lived in the tight trees). The second is a spark arrested muffler (or mufflers in the case of the RX). I understand that both bikes were designed for “closed course off-road racing”, but let’s get real, everyone goes trail riding and it sucks to have to spend big bucks for a spark arrestor to be legal.

So there it is, I’ve broken down both bikes and now the decision is up to you. Are you the aggressive rider who likes a nimble feeling  and races frequently? Or are you the 50/50 trail rider/racer who loves smooth bottom end power and a more stable feeling at high speeds? Feel free to reach out to me at michael@keeferinctesting.com if you have any more questions about these two bikes?  –Michael Allen