For 2018 Honda went slightly softer on the top engine mounts of the CR450R. This was to give the bike a little more compliancy (straight line stability) on square edge and choppy terrain. However, if you have listened to my podcasts you will know that the 2018 Honda CRF450R can still feel a little rigid when the track gets hard packed and choppy. When the track is soft the Honda performs at its best, but since we are on the west coast and our dirt isn’t as soft as east coast dirt, I wanted to get some more bump absorption out of the Honda chassis. The 2018 Honda CRF450R is a reactive, easy to maneuver machine and that is just a couple of its strong points, but after saying that it also can be a couple of it’s weakest points as well (when it comes to faster type tracks). You get what I am throwing down to you? If you don’t, let me explain: If you’re a vet, heavier guy or novice type rider that has a hard time cornering, the 2018 Honda CRF450R is a dream. If you’re a faster, lighter type of rider, the Honda can be a hand full to ride when you start to push the boundaries a little. Yes, it won the 2018 Keefer Inc. Testing  450 MX Shootout because it has a great engine, is easy to corner and has a set of fairly good stock suspension. What it does lack is some straight line stability and consistency when you start to really push it on rough tracks. You may not know who Kris Palm is, hell I don’t know much about him either, but when someone presents a part for me to test, I am usually not one to shy away from trying things that I think may help a certain bike. When Mr. Palm asked me if I wanted the option to try a bunch of his engine hangers for the Honda CRF450R, I was more than willing to try. Knowledge is power right? 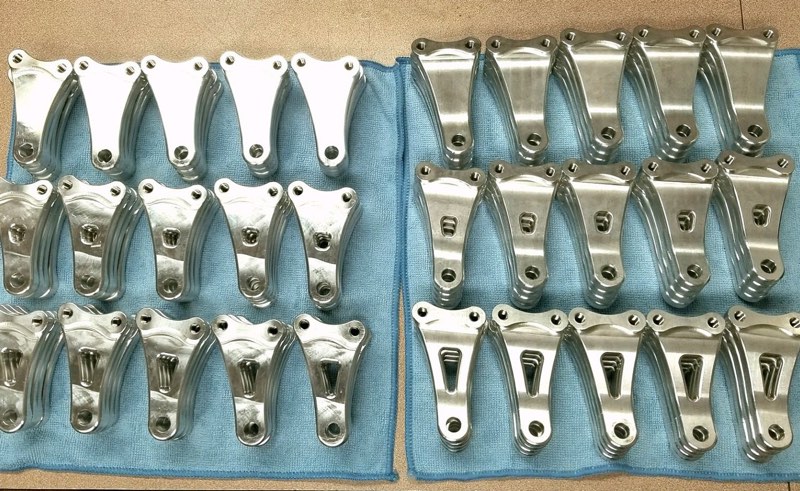 Now….. I am not going to type about every single combination I tried because I will be here all day typing and not riding/testing. The ones that I felt didn’t work as good as stock aren’t worth mentioning, but rest assured I went through several variations of these engine mounts to find the best setting that I think will be best for you Honda CRF450 owners. I don’t know which engine mounts Kris Palm will offer, but what I had to work with was the top aluminum engine mounts in soft, medium and stiff as well as front engine mounts (made out of titanium) that come in a 4.0 thick/4.0 hole, 4.5 thick/4.0 hole and 4.5 thick/7.0 hole. I also tried the engine mounts on the 2018 CRF450RX for you off-road guys and incorporated which combo worked best with that machine. Just like in professional racing, changing the engine mounts and the affect it has on the bike is a rider preference thing. It may not be needed for every type of rider, so if you feel like you like the way your Honda rides than don’t worry about this test. However, one smart test rider told me back in the day “you are only as good as what you try”. Some riders like a feel of a certain engine mount and stick with that year round, where others will change their mounts for track conditions. Below are a couple of engine mounts combos that I think may be worth taking a look into.

Best For: CRF450R and CRF450RX All Conditions

For better bump absorption and a slightly more forgiving feel on square edge, this was the best set up by far. This setting had more positives at each track I tested at and had a minimal negative affect on chassis balance. The medium top mount increased my rear wheel traction and gave me more front end feel on flat, hard packed corners. The Honda CRF450R kept its great cornering ability in tacky and soft dirt, but increased its cornering capability on hard pack with this medium top mount installed. Straight line stability was also a noticeable positive change as the Honda’s chassis felt less reactive (or more planted) on throttle which let me roll the throttle on sooner coming out of corners. Off throttle the CRF450R didn’t have as much of a wiggle as it did with the stock mounts installed. The only negative for me was a slightly slower feeling on lean in (into corners). Again, the Honda with the medium top engine mounts installed wasn’t as reactive, so it took slightly more work from the rider to get into ruts. To me that is ok as I can sacrifice a little “tip in” character for some added stability and rear wheel traction. Unlike what some other magazines will tell you, having a slower reacting machine doesn’t mean it will corner bad. To me you will be able to get into the corner better now because the Honda has a more of a planted feel once you chop the throttle to set up for corner.

Best For: CRF450R In Soft/Sandy Conditions

The stock front engine mount has a thickness of 4mm and is made of aluminum, but the bottom engine mounts Kris Palm offers are titanium. This means no matter if the dimensions are the same the flex character will obviously be different (because of the material difference). when going back and forth to different tracks I found out that the medium top mount and the 4.5 thick/4.0 front mount hole combination works best in sand and soft dirt. I felt the medium top engine mounts were better on compliancy, but it did suffer a little side to side flickability. With the titanium 4.5 thick/4.0 hole front mount and medium top mount it brought back that lightweight feel in corners and helped tip in. I didn’t like this combination as much in hard pack situations because it brought back some of the harshness on small chatter bumps and square edge. If your track is soft with bumps that break away, this is a great combination that gives the rider some added soft dirt bump compliancy on straight line and gives the Honda more quickness (lightweight feel) in cornering situations.

I went back and forth with this setting a couple times (on the same day) just to be sure I was feeling what I thought I was feeling on the track. Usually when I see “stiff” I shy away from it pretty easily when it comes to the Honda CRF450R, but this set up worked great for tighter tracks with medium to large sized jumps. With the stiff top engine mount, 4.0/4.0 front mount the Honda had a solid (less wallow) feeling to it when landing and kept great front end traction through long, deeper style ruts. This is not something that is particularly great on rough tracks, but if the track serves up some acceleration chop, long ruts, jumps with shallow landings and has good traction this combination was worth mentioning. It made the Honda slightly more flickable in the air and sudden direction changes (cutting down early from a berm or blown out rut) were better than stock engine mount setting. When I tried the medium top mount and 4.0/4.0 front mount the CRF450R flexed too much and become wallowy in the rear. Now I am just speculating here (because we don’t have much arenacoss type tracks in California), but I feel like this could be a great setting for you east coast winter riding guys that have those indoor facilities to moto inside.

Now here comes the tricky part. Kris Palm doesn’t have a website set up yet because he really hasn’t started pushing these engine mounts that hard. So if you’re interested in getting a hold of him, maybe to get a set, you will have to reach out to him via a Direct Message on Instagram @kris_palm. If you don’t know what a DM is, try Facebook. If you don’t have any of that email me and I will try to get you in contact with him. I told you it was tricky! It’s almost like the movie Fight Club, where the first rule of Fight Club is you don’t talk about Fight Club. The top engine mounts will run you $169.95 and the front engine mounts are $89.95. How can you pay? Get a hold of Mr. Palm and he can fill you in. Like I said, it’s like an underground club that you must know the password to get into.

If you have any reasonable questions about this underground Fight Club type test please feel free to email me at kris@keeferinctesting.com.