Fox introduced their updated 2019 V3 last month, but it has taken us a few weeks to get you an actual first impression of the helmet because we actually wanted to ride in it for a while. Call us crazy, but we really like to test products here at Keefer Inc. before opening our mouths. It also seems like a ton of gear companies are coming out with their own helmet technology and that sometimes can be overwhelming for consumers on which one to decide on. We at Keefer Inc. can’t sit here and tell you which one is the best, but what we can do is give you the information about the hemet technology and give you details on fit and performance, but it will be up to you to make the decision on which you feel the most comfortable with. Spending $500.00-$700.00 on a new helmet is a big investment on your part and we are here to help you through it. If you have any further questions about the V3 helmet please email me at kris@keeferinctesting.com as our open door policy is put in place to help you like no other media outlet can. 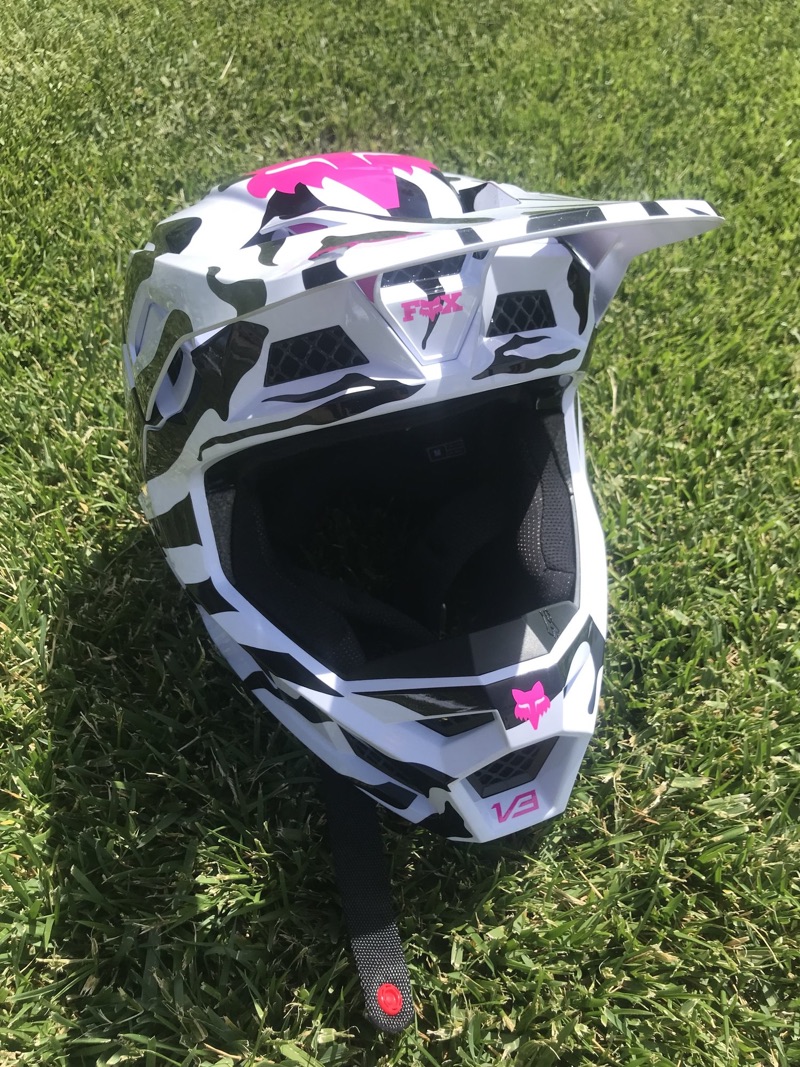 Almost every helmet manufacturer is trying to address rotational energy as riders take hits to the ground. There are a few different systems out there and Fox has come up with their own called “Fluid Inside” (or FI). There are seven pods around the inside of the helmet that are filled with a food-grade mineral oil that is supposed to mimic the same type of fluid that is inside your skull (cerebral spinal fluid). Crazy right? Fox claims that with this system, the head is decoupled from the helmet allowing the pods to squish and deform on their own, thereby absorbing rotational and linear energy. The MVRS (Magnetic Visor Release System) has been updated to be more secure than the previous V3 visor. No more of the “NO VISOR GASJER” out there on the track! Seriously, no one likes a bullethead. On the new V3, the visor slots into the top-front of the helmet with a dedicated channel rather than just floating on a round section of the helmet. This keeps the visor from popping off as easy when getting hit with roost, rocks, branches, but still allows it to separate from the helmet if you have a good sized crash. According to Fox, the benefit of the visor breaking away is in the event of a crash, the visor doesn’t act as a shovel and add energy transfer to the head and neck area.

The dual-density Varizorb EPS liner is meant to provide and improve protection by spreading the forces of impact across a wider surface area. A patent-pending chin bar/eye port CAGE is intended to improve energy management in the event of an impact as well. The MCT (Multi Composite Technology) shell construction that blends Carbon and FRP resins are weaved to try and provide a light yet rigid external shell. Injected Mesh vent screens across the helmet are put in place to try and provide superior ventilation and airflow, while maintaining protection from dirt and debris. The removable, washable X-Static® comfort liner and cheek pads are antimicrobial and are put in place to manage odor while work together to wick moisture away from the head. The new V3 meets or exceeds DOT and/or ECE 22.05 standards.

I wanted to ride back to back with the older V3 and the new V3 version, so I spent a few weeks going back and forth between the two, switching helmets every moto to pinpoint what was better/worse. We are going to do a full blown helmet shootout very soon to compare a whole mess of helmets, but in the meantime here is how the new V3 feels/performs/ventilates/fits/looks compared to its older sibling.

On The Head/On The Track:

The first thing I noticed with the new V3 is that it ventilates a lot better than the older model and to me is the most ventilated helmet that I have tried in quite sometime. The newer V3 helmet has 12 intake and 3 exhaust ports compared to the 14 intake and 4 exhaust ports of the older helmet, but the vents that the new V3 version does have work amazingly well.

The second thing I should mention is that the new V3 fits a little different than the older V3. The newer V3 has a snugger fit around my ears when the helmet sits on my head. Just note that if you’re a medium (like me) the new V3 will fit slightly tighter than the older version on each side of your head. With that being said, I DO NOT feel any hot spots on my head when wearing the V3 for long periods of time as comfort is not an issue. The issue I have mostly comes when taking the helmet off. I really have to spread the V3’s strap/buckles apart to spread the shell out as far as I can so it doesn’t rip off my ears when my head is coming out. Getting the helmet on and off was the toughest part for me, to the “fit” of the new V3

The plushness of the new liner of the V3 feels a little different than its older brother. The old V3 had a nice feeling inside, but over time, as you sweat, then wash, ride, the liner would get less soft (harsher) to my skin. The new V3 is the opposite as I wasn’t impressed with the plushness of the helmet when new, but when I rode in it for a week, washed the liner twice, then wore it, it felt much better than the older V3. Weird I know, but something I thought that was worth mentioning. If you think the liner of the new V3 is not as soft as what you desire, try washing your liner in the sink, let it air dry, and re-install. Thank me later! ( Note: You can wash your liner/cheek pads in the washer, but put it on gentle wash) I will concur that the new V3 liner doesn’t stink up to high heaven (after a long hot day) and that it does wick away sweat pretty damn good as well.

I also wanted to mention the new MVRS is much better this time around. I had two visors blow off of me on the old V3 (once when I had a small wash out in a corner and one on a low hanging tree branch while trail riding), but the new MVRS system seems to be stronger. I had one low side crash through a corner with the new V3 and in that crash the front of the helmet took the brunt of the energy, but the visor stayed in place! Boom! Wiped myself off and continued on while hoping no one caught that lame spill. The bad news is that I don’t think the new V3 comes with an extra visor as I didn’t receive one inside my box. Fox’s website also doesn’t specify if they put an extra inside the box.

The eye port of the new V3 is improved for me personally. The older V3 eyeport let a ton of roost inside of the helmet and almost felt too large at times. Although I don’t know the exact measurements of each eyeport, the new V3 eyeport feels smaller to me because it doesn’t allow roost in as easily, while maintaining a wide enough peripheral to insert large framed goggles. I did a wide peripheral goggle shootout with the V3 helmet and all “Big Three” goggle brands sealed nicely inside the helmet without an issue.

I get this question a lot… “Kris what about weight? How heavy is it”? The new V3 “feels lighter on my head while riding, but my scales here in the shop say they are the same in weight (3.2 pounds). Is it the lightest feeling helmet I have worn? No, it’s not, but it’s definitely not the heaviest either. I have run across this “weight discrepancy/dilemma” with dirt bikes as well. I have ridden bikes that weigh heavy on the scales, but feel light when I tested them. This is what I also feel with the new V3. So in my personal opinion don’t look so hard on the “numbers”, but pay more attention to what it actually feels like on your head. This should also go hand in hand with other aspects of life. Pay attention to what things feel like rather then be enamored by numbers, dynos, graphs, etc. I know long distance riders (off-road guys) prefer a light feeling helmet, but I think this helmet is good enough for those type of riders.

Again, I did not have a crash in this V3 helmet, but if you want to listen to someone who did have a big one, go to Donn Maeda’s website swapmotolive.com (https://www.youtube.com/watch?v=22r2qer2NOo) and you can listen to his testimonial. I always say that helmet technology is a lot like religion in that you will have to go with the one you believe in the most. None of these helmets are going to save you from getting a concussion if you hit hard enough! PLEASE JUST KNOW THIS! All of these new technologies that are popping up will only help our sport get safer and now Fox is doing their part to see this through.

Last, but not certainly not least my metrosexual side has to kick in here people! If you’re a manly dude and don’t give a shit about looks you can stop reading now. I prefer the new V3 shape/looks much more than the older version. Why? A couple reasons…The new V3’s visor shape is longer, not so stumpy, and even though I can’t adjust the visor, the placement in which Fox put the visor on the helmet is perfect. The front of the helmet has a much more attractive chin bar area and the overall lines of the new V3 to me are much more race inspired than the older V3. Yes, I am 42, but I love the zebra print! You older dudes shouldn’t give a crap and rock the zebra stuff too! Just because it’s loud doesn’t mean you’re too old to rock some of this stuff! I always loved wearing Fox head to toe, but never was completely in love with the older V3 looks when I viewed photos of myself riding in it. The new V3 is sexy and looks much better than the old one. Ok, metrosexual talk is finished now. Thank You.