As the 250(F) class continues to be more competitive, it puts increased pressure on the manufacturers to make a solid platform for racers to start with. For their newest rendition of the KX250, Kawasaki was kind enough to invite us up to the legendary Castillo ranch for the first ride of the new bike. Being that the 250 is such a small four-stroke engine, it’s imperative that manufacturers squeeze every bit of power out of the tiny screamers and for 2020 Kawasaki went back to the drawing board. On top of changing many engine components, Kawasaki also focused on the chassis, suspension, and brakes to make the KX250 a contender for best in class. For this story we thought since you ask us “how does it compare to the YZ250F” all the time we thought it would be fun to compare the 2020 KX250 to one of the best bikes in this class: the 2019 YZ250F. I have been riding the 2019 Yamaha YZ250F for some time and have become well aquatinted with it, so Keefer asked me to conjure up this article and now here we are! Here is how I feel the two machines match up against each other. 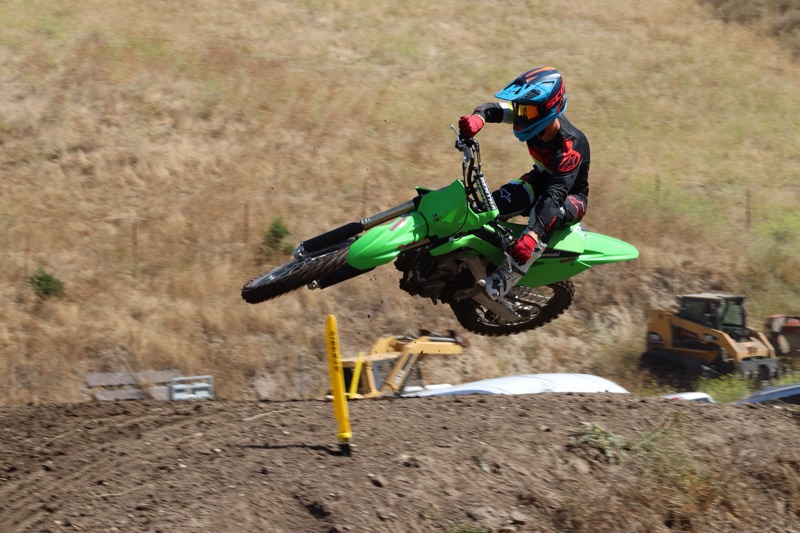 When it comes to torque the Yamaha platform has been hard to beat for the past few years, but that doesn’t mean it can’t be beat in other areas of power delivery. Right when I got on the new 2020 KX250 I immediately felt like the mid to top end power was better than the blue machine. The KX engine revs free-er and has les engine braking on de-cel, which makes it very playful to ride. The Yamaha is more chuggy and you can feel every time that crankshaft comes around, which gives me that planted rear end acceleration feeling. The power on the Kawasaki doesn’t fall off as quick as bLU cRU, but to me it still doesn’t rev as far as the CRF250R. Where the green machine does fall short is of course bottom end grunt power. The Yamaha simply is amazing in this area and can let any rider be lazier while still maintaining speed. The Kawasaki must be ridden more aggressively from the mid range on up. Third gear is much easier to work with through corners on the Yamaha compared to the Kawasaki, which means shifting down to second happens more often on the green machine.

Another tidbit that stood out to me is the exhaust note of the Kawasaki. The Yamaha exhaust gets blown out and raspy over time, but the Kawasaki exhaust note seems to be loud immediately. I also found it odd that if the Kawasaki was not at TDC the kick starter was hard to kick over and almost felt like a 450ish until you put a lot of force into the kick start. In other words don’t half ass your kicks and it will start.

For the past few years Kawasaki has been using the Showa Separate Function Fork for “weight savings”, but they have finally realized that like the air fork, some things are better the old fashioned way. For 2020 they went back to a dual coil spring KYB fork as well as a KYB shock, both with Kashima coating. After playing with some clickers we came up with a comfortable setting and I came away quite impressed with the comfort as well as the performance of the front and rear suspension. It’s no secret that the Yamaha has very good suspension settings, but I think there is one category where I think the Kawasaki slightly edges out the Yamaha. When it comes to performance I feel that the Kawasaki (for my speed) has slightly better hold up (once dialed in with clickers) and handles g-outs with a slightly less wallowy feeling. That being said, in order to have better performance, you must sacrifice comfort and the Yamaha has more of that. I am sure the slightly stiffer feeling chassis on the Kawasaki has something to do with the lack of comfort as well. Something we noticed was that the front and rear balance of the bike is very sensitive to changes with the shock. With minimal changes to sag, one or two low speed clicks, and/or high speed changes on the shock, the turning characteristics were noticeably affected. Just like your wife or girlfriend the KX can be somewhat emo/sensitive to suspension changes affecting the maneuverability of the bike, but when it’s set correctly the bike handles tighter corners marginally better than the Yamaha.

For 2020 Kawasaki put a larger 250mm rear disk on the KX 250 to help improve braking power. I’m not sure what the exact problem is with the rear brake system, but Kawasaki missed the mark because the rear brake is not as good as the Yamaha’s. After my initial ride on the bike I felt that the rear brake pedal was too low and I wasn’t able to get my toe pressed down far enough to get the braking power I desired. After moving the pedal up, I took the bike out for another session and was surprised that I still didn’t have the desired braking power. Upon further inspection we noticed that the pedal has a very long stroke to get the brake to work and when it finally does it gets very grabby feeling. This was a downside because it makes it hard to drag the brake slightly or just give the rear wheel a little stopping power without locking up the rear wheel. While the Yamaha doesn’t have amazing brakes, the rear brake on the blue bike is more linear and easier to modulate. With that said the front brake on the Kawasaki is quite good and gives the rider a powerful progressive feel with a lot of control, without having to pull the lever too hard.

The rider triangle on the KX250 feels a little off due to the slightly soft seat. The soft seat makes the 7/8” bars (I have no problem with the bars) seem high and chopper feeling. Rolling the bars back seemed to somewhat remedy the feeling, but not completely mask the issue. Something that hasn’t changed on the Kawasaki is the cheap feeling grips that for some reason seem marginally narrow and are bonded to the throttle tube.

The bottom line is that for 2020 Kawasaki made a move in the right direction in making the KX250 a better more competitive machine. The engine has been improved from mid to top and has a free revving feeling that makes the bike more fun to ride while giving the rider a broader power range when on the track. The suspension has made a big step in the right direction with the new KYB fork giving the rider better front end bump absorption.

The final piece to this article is the price… The KX250’s price point comes in at $7,799 (compared to $8,199 of the Yamaha) so it’s less expensive. If you have been looking to be part of the re-formed Team Green, 2020 seems to be the year that Kawasaki made jumps in the right direction.

Any questions about these machines please email me at michael@keeferinctesting.com