Having the opportunity to travel to a new destination for a new model release is a no brainer. New places, new faces, and new motorcycles are a seamless integration that I’ve always really enjoyed being apart of. This time, I got the chance to head to the Pacific North West for KTM’s 2020 TPI Offroad introduction. This all encompassing read that you are about to dive into will highlight these great new Austrian bikes as well as the whole kit n’ kaboodle that made up these memorable couple days hosted by our good friends under the orange tent. 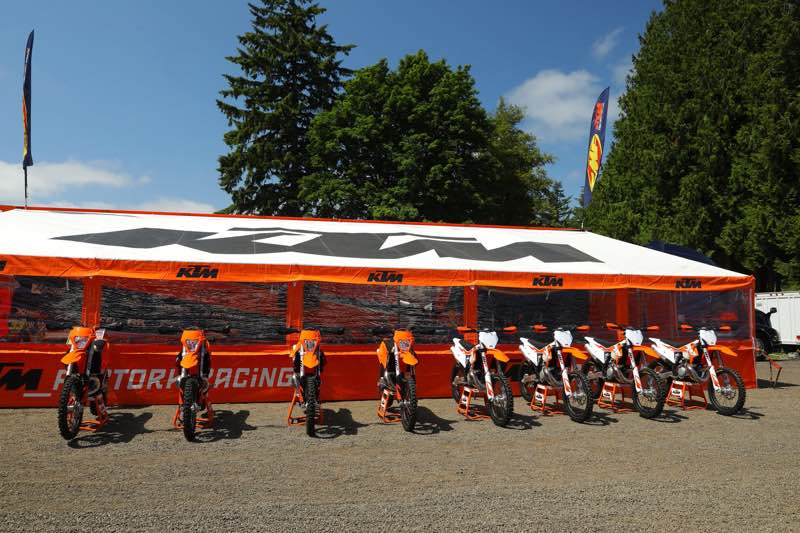 For starters – this was a bucket list type of event for me. To be able to fly into Seattle with a fresh gear bag packed and ready to ride is a dream. No loading up bikes, tools, spares, nothing. KTM did it all for us, even to the extent of pre-registering us in our respective classes for round 7 of the WORCS series. It is by far the closest thing to being a factory supported rider that I’ve ever had. Literally – show up and ride (or I should say race). Let me keep going as I describe the smile I’ve been wearing the last few days – KTM also had their factory offroad semi for us to pit out of with our teammate, Taylor Robert. With the rig came a personal chef, whom prepared the team amazing breakfast, lunch, and dinner meals everyday. I mean, COME ON! Is Keefer Inc. worthy of such treatment?? I would say no after seeing my race results, but I’ll get to that later.

Now onto the meat of this story and the real reason why I attended the Grays Harbor WORCS event. For 2020, KTM expanded their two-stroke TPI model lineup (Transfer Port Injection) to include both the 300 and 250XCs, as well as an all new 150XC-W. This means five total models are available when you also add the 300 and 250XC-Ws that were introduced last year. As you may or may not be aware, the new TPI technology is a game changer in the two-stroke world and the closest thing to relating the modern day four-stroke EFI to our old school pre-mix friends. Now that this injection system is available on these new bikes, say goodbye to carbs and jets forever as they will no longer be offered in these lineups. Love or hate new technology, you have to get used to it if are looking to buy yourself a new steed. All of these 2020 offroad bikes see the newest generation chassis and suspension, as well as updated bodywork, exhaust, and of course power-plants. Since my primary focus at this event was centered around the 300XC, I’ll highlight some additional details now.

The XC bikes are meant for true closed course competition. If you consider the SX platform as pure bred Motocross/Supercross, the XC is a pure bred offroad machine. Outfitted with a larger gas tank, 18” rear wheel, and a six speed transmission (amongst many other traits), out of the box these bikes are pretty much “Ready to Race”. The 2020 300XC TPI sees a newly designed oil tank with a built in mesh filter to protect the oil pump from debris. This tank electronically controls injection into the throttle body, ensuring an average fuel-to-oil ratio of 80:1. This means one full tank of oil (0.7 liters) is capable of lasting you at least five full 2.25 tanks of gas (11.25 gallons total). That is an amazing amount of riding you can squeeze out of these machines. And don’t worry – 80:1 sounds incredibly lean, but that is where technology comes into play. You do not have to worry about harming your motor – the electronics prevent all of that. And no – you cannot bypass the system. Meaning, the question of “can I just run pre-mix and not fill the oil tank?” The answer is no, these modern motors do not work like that. The new exhaust system looks interesting (almost cone-pipe ish) but definitely purposeful. The ridges are from a 3D stamping process for better strength and resistance to rock/debris impacts. At the same time, they reduce noise levels as well. You might also notice the oval shape near the lower frame cradle which is meant for more ground clearance and reduced width. The pipe is matted to a newly designed silencer as well, which has re-worked internals for better flow in order to harness higher performance.

Enough about the details, let’s ride the damn thing. Our Editor in Chief insisted that I raced the 450A class against some of the fastest offroad kids on the west coast (I’m retired bro). I was able to get one 30 minute unclassified session in the morning to get a feel for the bike and learn the race course to the best of my ability. Afterwards, I only requested a couple adjustments to suspension for added comfort, where I slowed rebound front/rear as well as decreased compression. The rocks n’ roots in the woods were in abundance and to race for over an hour I wanted plushness. After that it was off to the races as I lined up against 17 others on my row. I had a decent mid-pack start, but soon found myself laying in a buttery mud-slick three turns in (aka dead last). I had my work cut out for me but relied on my brand new 300 to get me back to the pack. The entire race course was incredibly slick, so traction was almost non-existent, except for the MX track. The 300 was an absolute beast in these conditions. I had to remember to keep the bike in third gear almost everywhere inside the tree-lined single track. The lugability and crisp running motor allowed me to stay very light on the throttle but not sacrifice race pace. This bike allows you to stay in a higher gear at very low speeds without stalling. It continues to roll smooth, and if you crack the throttle all the way open, it does not bog or fall on its face. It efficiently works the motor back into the powerband.

For anyone riding or racing Enduro or cross country genres, this bike is a weapon. You don’t have to rev it to go fast at all, and quite frankly, it begs for the complete opposite. There were only a couple fast straights for us to open up all the way, but that is not where this bike shines as the motor pretty much signs-off at high RPM. The chassis was stable and easily maneuverable as the bike felt light and flickable. I experienced little to no vibration and overall rigidity was vastly decreased when comparing two other generation 300XCs that I’ve ridden and raced in the past. I wish I had more time to further dial in suspension for me, but unfortunately my changes after practice didn’t really improve the feel as much as I would have hoped. On the defense, the conditions were tough out there and made me work hard for the hour and ten minutes I was on course. I’m confident that the range of adjustability in these new XACT components would have allowed me to really dial things in if we had the time to do so.

At the end of the day, I worked my way up to a less than stellar 14th place result. My initial goal was top 10, but for this washed-up retired offroad dude, it just wasn’t in the cards. Hats off to the front runners as these kids are no joke. Needless to say, the entire experience was one to remember. I had never ridden in the PNW before, but I can’t wait to go back (coming soon in my future). A huge thank you to the entire KTM crew as they hosted one hell of an event for the media as everything ran picture perfect. Not one thing was overlooked and seeing how the race team operates first hand during a race weekend made me truly respect and appreciate the Redbull KTM Factory effort even more than I already do. Team manager Anti runs a tight ship and it shows. For anyone reading this (thank you) and interested in KTMs 2020 TPI lineup, definitely consider one of these bikes. If you haven’t accepted the fact that technology has taken over the motorcycle world yet, I’m not sure what to tell you. For two-banger fans world wide, think about it: never having to mix gas ever again. Your Ratio-Rite can now become a cocktail cup (thank you Randy Richardson). Never having to mess with jetting ever again. We now pray for those screws on the bottom of our float bowls that are probably stripped out by now. And lastly, never having to worry about a two stroke that just doesn’t run crispy, the way we all want it to 100% of the time. Because let’s face it – a super crisp two smoke is sure to put a smile on your face. The KTM TPIs are one hell of a package.

Thank you again for reading! Any questions, get at me!