Lock on grips are all the rage right now. I mean I get it, they’re fairly inexpensive, easy to install, and takes literally a minute to install fresh grips and immediately go ride. I have been kind of old school in my “grip ways”, but thought I would test the ODI V2 Lock On Grips to let you all in on how they perform, fit, feel, and last. 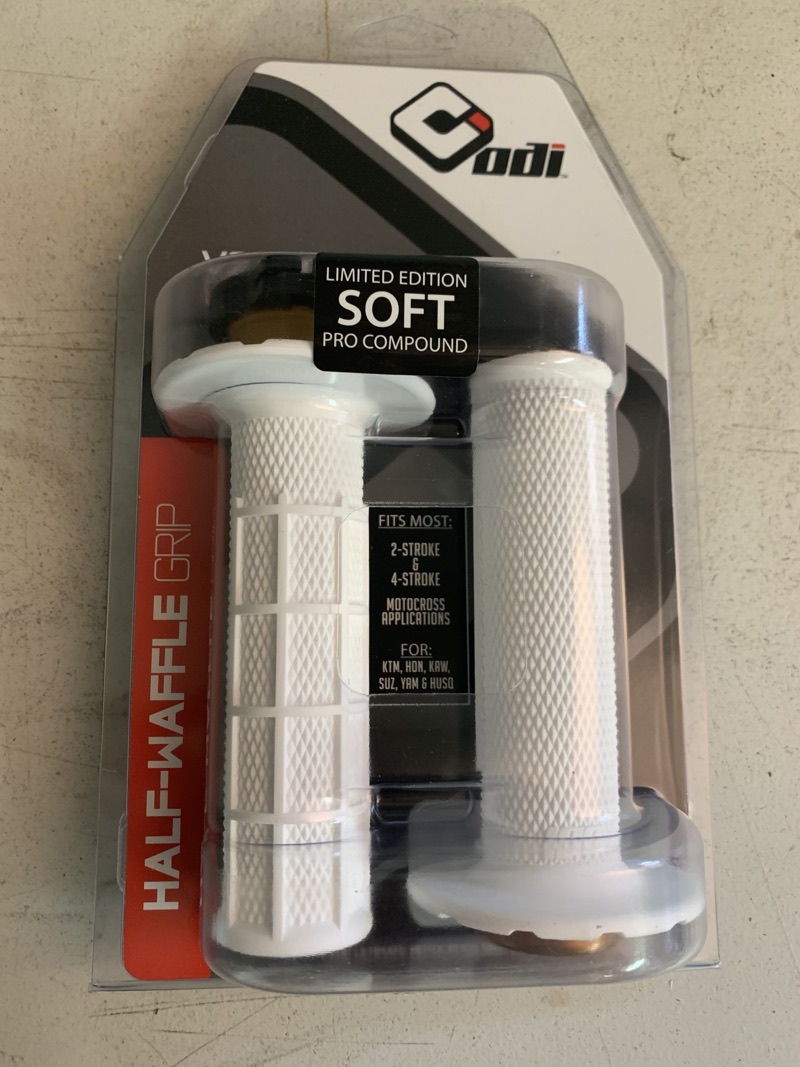 The V2 grip is designed with a low-profile pyramid pattern and a custom-designed half-waffle pattern that eliminates the inside corner where other grips may irritate your hands. Since you don’t need to glue or wire the grips in place, a lock-on grip can be installed in less than a minute (and riders who destroy their handlebars at the races can change to new bars without waiting for grip glue to dry). I do really like this feature of the lock-on grips, but at times I didn’t like the rigid feel that the left side gave me (more on that later). I also liked that when you tip over, the grips didn’t rip nearly as easy, and it kept dirt from getting inside your handlebars.

Installing the clutch-side grip is simple. Slip the grip’s plastic tube onto the bar and tighten a single Allen bolt. Note: The clutch-side grip only has a pinch-bolt on the inside end. The benefit is that there is no hard aluminum clamp on the outer edge which leaves a cleaner look. I will say that if you’re installing ODI Lock On’s onto new handlebars with knurling on the left side, you may have to sand down the knurling a little in order to be able to get the grip’s tube to slide over the handlebar.

Don’t think of the ODI V2 throttle side as just a grip, because it’s actually a plastic throttle tube with a grip molded on. ODI makes a throttle tube that accepts a variety of interchangeable throttle-cable cams. ODI makes different cams for most two-stroke and four-stroke models and you’re able to interchange the throttle cams if necessary.

Even thought these are lock on grips and they have the grip molded to the plastic, they don’t feel that big. I can’t stand large feeling grips because they make my arms pump up too quick. I like that each end feels the same and not larger than the other, like some glue on style grips do. I liked the design of the half waffle as well as the super-soft material that wasn’t hard on my hands. You will notice that these grips are slightly shorter than other grips, but it doesn’t create an issue with my size 10 (large glove) hands.

The durability of the V2 ODI grips are superb as they will last as long as any other soft half waffle grip on the market that I have tried. My son Aden has had a pair on his KTM 85SX for several months and they are just now starting to show signs of wear from his nervous novice death grip. If you’re a sensitive grip kind of rider you will notice that lock on grips will feel slightly stiffer than regular glue on style grips on slap down landings, braking bumps, and acceleration chop. These are just some things that I feel, but again not everyone is as sensitive to grips like I am. Glue on style grips feel a little more cushy than the lock on’s in those areas.

For $25.95 the V2 ODI Lock On Grips cost double the amount of money (from glue on grips), but you’re getting an easier to install grip that lasts just as long as well as a new throttle tube with every set. KTM and Husqvarna come with V2 ODI Lock On’s and I have found myself replacing worn stock KTM/Husqvarna ODI’s with the same grip because I have grown to like the feel of ODI’s in my hands, on these two machines.

Any questions about this test feel free to email me at kris@keeferinctesting.com