Over 300 part number changes have been made on the 2021 Kawasaki KX250. After our first day on the new KX250 I was quite impressed with its ability to pull hard out of the corner and rev out longer than last year’s model. However, even though the Kawasaki has improved for 2021, the muffler still sounds a little too blown out for me in stock form (even when new). The tone of the muffler is not pleasant to the ear, so I crossed my fingers, called Pro Circuit and picked up a Ti-6 Muffler System to see if it enhances the current engine character of the KX250. Here’s what I came away with… 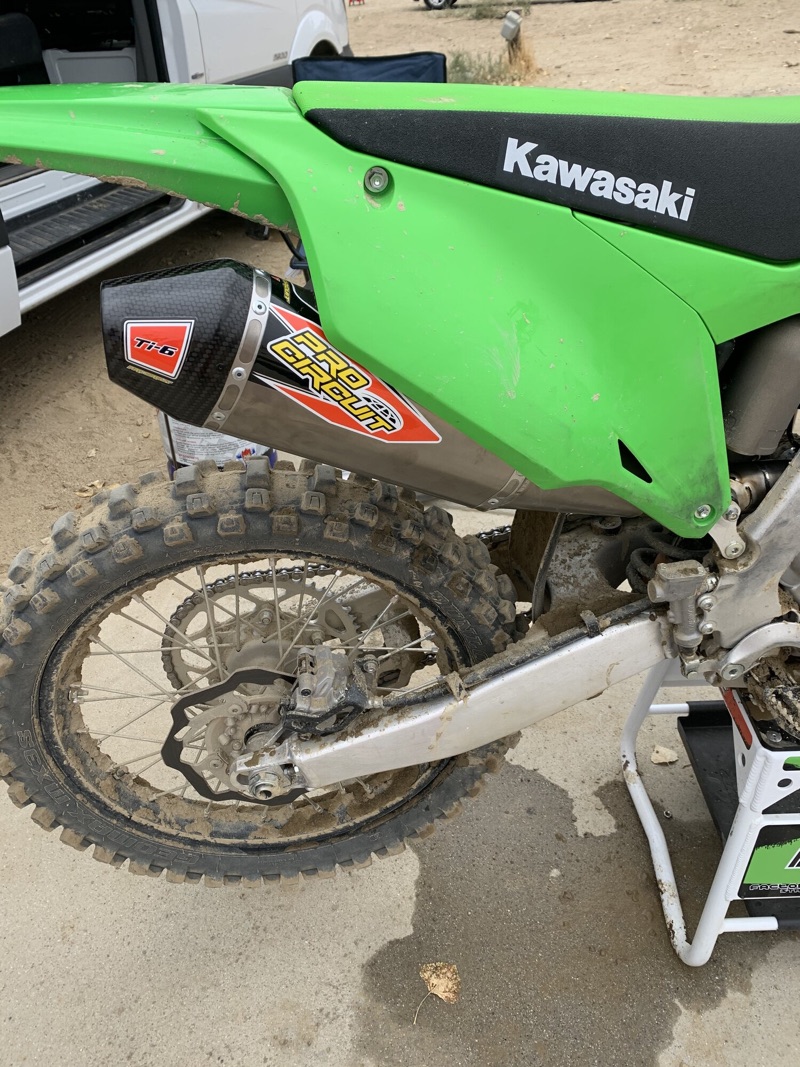 Immediately I weighed the both mufflers and took notice of how the Pro Circuit system cut just over 1.2 pounds off the green machine so we were starting off well. The next thing that made me happy was that the PC muffler goes on easy and literally took me 7 minutes to change out! Boom! So far so good! After installation I recruited my son to help me evaluate the system as he now has a new found love for the KX250 that didn’t exist last year. I made him write his notes down and I told him we would compare both of ours after we have tested this muffler at three different tracks. We tested the Ti-6 at Glen Helen, Perris and State Fair MX just so we knew exactly what we were getting out of the PC system.

When you purchase your Ti-6 muffler it will come with a spark arrester screen already installed inside the muffler. DO NOT REMOVE THIS! This helps with back pressure and gives the KX250 the RPM response and bottom end that Aden (my son) and I both like. When we took it out the PC system lost some excitement down low and lost a little bottom end. You can however punch a small hole through the back of the screen and then reinstall it. Doing this actually helps give the PC system a little more bottom end and RPM response while still retaining that back pressure that is important for rear wheel connection.

Ok so now that we got the “tricks” out of the way, how does this PC system compare to stock?. Normally I DO NOT get more bottom end with a PC system (versus stock) on any brand of bike, but I was surprised that I got a little extra bottom end pulling power out of the PC system. RPM response is a little softer than the stock system, but when opening up the throttle out of corners the KX250 with the PC system pulls harder than the stocker. Mid range is where you will feel the meat of this power. When accelerating out of the corner and shifting to third, the KX250 doesn’t have that “empty” feeling that the stock muffler has at times when the track is tilled deep. The PC system keeps pulling once the KX250 is shifted into third gear and continues to pull harder into the top end of the machine. Over-rev is as good as stock and I didn’t notice any loss of over-rev when swapping the two mufflers back and forth.

Overall Aden and I are pleased with the PC system for the 2021 KX250 and I guess we shouldn’t be surprised as they do have that Kawasaki race team and all. My son surprisingly felt most of the pulling power, but didn’t feel much increase anywhere else, so not bad for a 14 year old squirrel. Hey, Mitch! If you’re reading this, good job! Chanceability that he reads this? ZERO. POINT. ZERO!

Extra Credit: If you want more pulling power as well as more top end install the “Chavez Map” with your Pro Circuit Ti-6 muffler and thank me later. See below for map..