I met Dallas Dunn through the hi dez as we sometimes met up at the same places to ride from time to time. As I got to know him more, I could tell he was a quiet, hard working guy, that just loved to ride anything two wheels. Dallas is an accomplished BMX rider as well as one of the best photographers I have come across in my time. When I started this OMOD thing, I wanted some of my core test riders as well as free lance guys to write some raw evaluations, for you the consumer. When Dallas told me he purchased a new 2021 Honda CRF450R, I thought this would be a perfect article for Keefer Inc. Testing. Dallas works his balls off, is a single dad and purchased a $12,000 motorcycle because he loves to ride. How many of us can relate to that?! I would say A LOT of us could. Without further adieu, here’s Dallas and what he thought about his purchase. -KK

Let me start out by saying I’m by no means a great test rider, I think I am getting better at feeling the motorcycle, but this isn’t what I do all the time. I’m a 34-year-old and a full time heavy equipment operator that just loves to ride dirt bikes in my spare time. Thankfully Kris has taken me under his wing and gave me the opportunity to be a part of Keefer Inc. My main roll here is lurking around in the background with a camera in my hands shooting photos, but I want to challenge myself to learn other things to help out as well, so that’s why we are here giving you my “On My Own Dime” article. 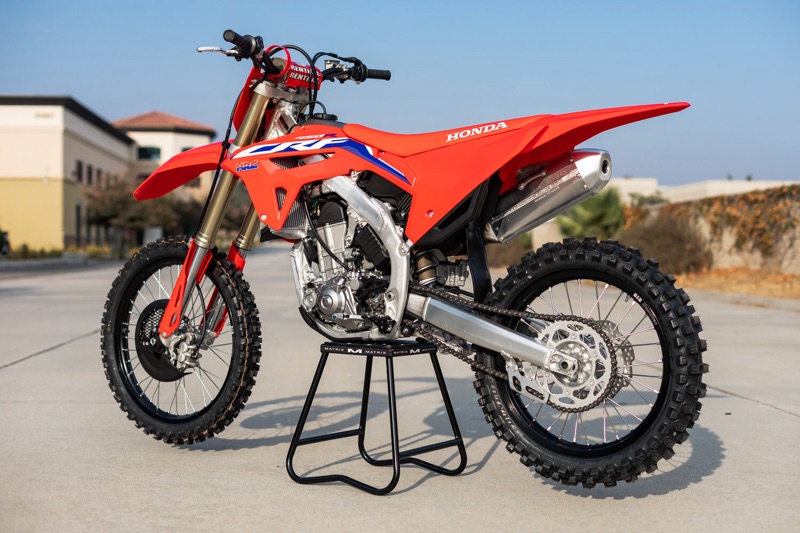 The New 2021 Honda CRF450R has been one of the last bikes to get released and hit the showroom floor. I have been riding Suzuki’s for the last couple years, but when I laid my eyes on the new Honda CRF450R, I was instantly sold. Honda is known for its quality motorcycles with great durability so this red one is the one I really wanted. Since selling my RMZ450 in July, I’ve been waiting for this beauty to hit the dealers and I almost pulled the trigger on the 2021 Kawasaki KX450F, which is also a great bike, but my heart was set on the CRF450R machine. I’m stoked I didn’t settle. September 16th Honda had their Intro at Glen Helen Raceway, but unfortunately I was not ale to make it down with Kris that day because I was on shift at work.

After hearing about the first rides on the bike and some of the negative reviews on the ECU mapping, I was a little discouraged. I thought the bikes would get delayed longer… I almost went down to the local dealer and picked up and the 2021 KX450, but I would call Kris to chat it up and he would just say, “just CHILL DOWN and wait”. Not much time went by and they showed up at a local Southern California dealer. They had a few extras that were not spoken for, so I left work early and hauled ass down to the dealer and plopped down 12K on a new Honda! Yeah, 12K. More on that later…

After about three months off the bike I was back in business the following Tuesday. I loaded up my fresh new CRF, met up with Kris and Aden down at State Fair MX to break her in for its maiden voyage. So far, the bike hasn’t had the best reviews, but I was still stoked on it. I really wanted to compare what I felt to the amazing test riders that really are just splitting hairs.

My first time out on the track just to break it in my first impression was WOW this thing is bad ass. I had a grin from ear to ear under my helmet! Coming off a 20 RMZ 450 that had a few mods, this new Honda already feels better than what I was used to riding. I did 2×15 min mid throttle motos with cool down periods for break in and was ready to give it a real test.

I’ve always liked the rider triangle and ergonomics on Hondas, so I already felt right at home and after coming off the RMZ, this bike was confidence inspiring for me. The bike tracked straight and felt compliant over the small bumps that we have on the west coast. State Fair MX is a smaller track, so I don’t feel I have any issues with stability. I’m 170 pounds so as of right now the stock suspension fell adequate enough for my Vet B rider ass. I feel like I can go a little stiffer on the fork, but I just left it alone for the day. My Technique is a little off from not riding for a few months, but cornering this bike was next level. Honda’s new thing is “Razor Sharp Cornering” and I noticed it did have a Suzuki feel when entering corners. I also liked that it tracked straight on the exit of the corner over acceleration bumps. When I went to a faster track the following day I dripped the forks down to 3mm and that helped increase stability without hurting the cornering character I liked so much.

Compared to the 2020 CRF this new 2021 bike has a lot more roll on power that doesn’t just explode out from underneath you. This 2021 power plant is much more manageable. At times I was wondering if I was in 2nd or 3rd gear because even 3rd gear had great low end power and I could lug the bike around if I wanted to. I rode in map 1 and I could feel the (dirty/gargle) rich feeling down low so I rode in MAP 3 most of the time during the couple days I tested/rode. This Honda is very easy to ride and roll on throttle almost felt like a KTM. I want to have the ECU re-flashed by Chad at XPR, or Jamie at Twisted to see how much better this red machine gets. I’m excited to see how the re-flash improves the throttle character. I really like the overall feel and performance of the new hydraulic clutch and the lever pull is so much better than previous years. Shifting and modulating the power in the turns with the hydraulic clutch feels much better to me than when I had my cable pull clutch on the yellow bike.

No, but if I was going to spend 12K on a bike, this bike sure does make me forget how much it was when I ride it! That’s how much fun I am having on this machine compared to my Suzuki. This new bike has got me moteted to eat better, train more and improve myself. So I guess you can say that 12 grand is also giving me a better quality of life as well. My mental health is much better as well as getting to hang out with my friends and ride, instead of working on my bikes is a welcomed site! -Dallas Dunn