The average shootout format seems to be an outdated model to me. Don’t get me wrong, I like doing shootouts, as well as viewing their rankings after all is said and done, but is it really telling you, the potential consumer, what you want to know or is it more of a scene on the side of the freeway that you just have to look at? I have done shootouts for 20 plus years and although fun and interesting to do, I just don’t know if it’s something that gives buyers the most information in these ever changing times. Just because a certain bike wins a shootout doesn’t mean it’s the best bike FOR YOU! I get countless emails about which bike is right for me and most of them say that they watch every shootout video, but they still can’t decide. So if you are one of these potential consumers that still can’t make up his or her mind, then this article can help you hone in on why a certain bike could be right for you. As a production test rider for several manufacturers over the years, I am wired to think about all different types of riders when I evaluate a certain machine. In this article I will try to break down each machine, which one does certain things on the track better than the other and hopefully give you more purchasing knowledge on which way you’re directing your hard earned money. We will be doing these types of matchups with other machines down the road, but we hope this gives you a more clear cut path on if one of these two machines are right for you.

Why KTM Vs. Husqvarna: I picked these two because let’s face it, most of you out there think these two machines are the same, however when I ride these bikes back to back they don’t feel that similar. The Husqvarna is lower to the ground compared to the KTM (10mm lower) so handling feels different. The engine character varies because of the subframe/airbox differences and the suspension setting/bump absorption doesn’t feel the same due to, you guessed it, swingarm and valving differences. Each have specific traits about them that are better than the other and we are here to break those down for you. Even if we do break all of the nuts and bolts down to you, it’s up to you to know what type of rider you are. Are you a front end steering rider? Do you like an exciting or smooth engine character? How often do you ride? Do you just ride or do you race occasionally? These are the questions you should be asking yourself before you spend 10K on a new dirt bike. 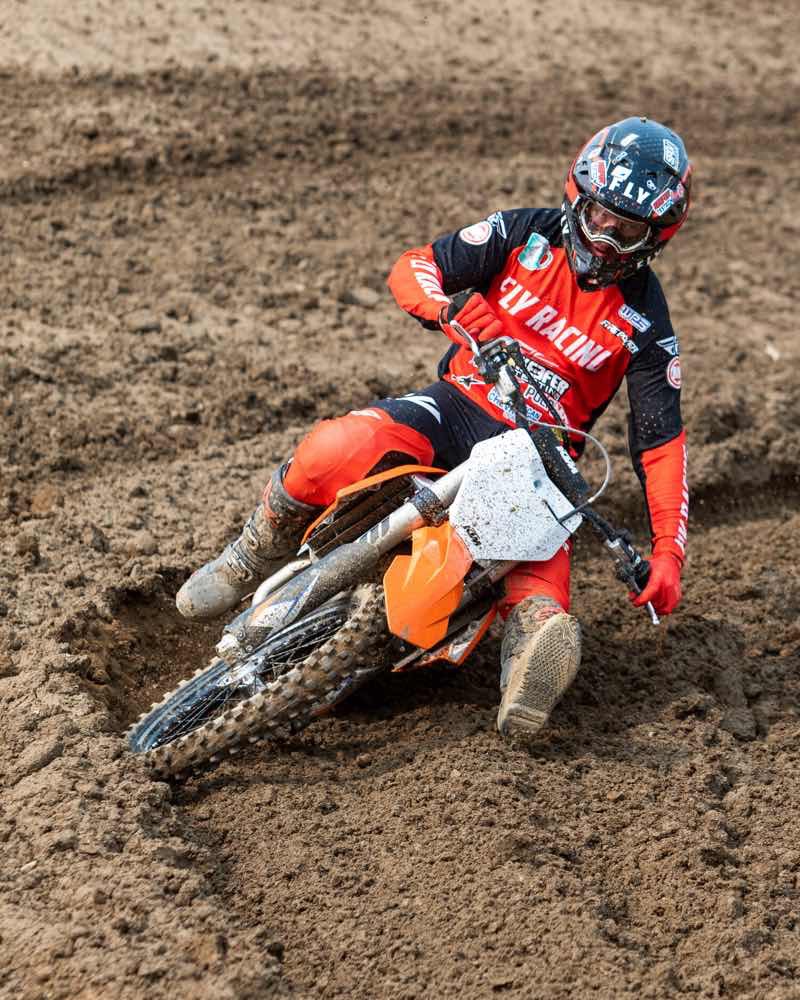 Engine Feel: The KTM has more roll on low end power and throttle response than the FC450. The KTM does feel lighter in tighter areas of the track, but feels similar to the FC450 through the mid range. However, top end doesn’t pull quite as far as the Husqvarna nor does the KTM feel like it revs out as far as the FC (in map one or two). Engine vibration is more noticeable with the KTM, but to me the KTM’s ECU feel just has more crispness and a cleaner feel throughout the RPM range. If you’re looking for massive amounts of torque feel on the track, you’re looking at the wrong color, but if you want an easy to ride 450 that you can actually manage, this orange bike is best in class in that category.

Chassis: If you’re a current KTM owner you know that it takes more time to break in the 2021 steel frame compared to a Japanese aluminum framed motorcycle. I only around 10 hours on this chassis, but it literally took me almost 7 hours to feel completely broke in. The Husqvarna feels more forgiving sooner than the KTM frame. The KTM turns better in area 2 of the corner compared to the FC, but the Husqvarna does have a little better side to side movement than the orange bike does due to the lower feel of the white bike. Straight line stability on the KTM is not the best of the 450 bunch, but not the worst neither. You can drop the WP XACT fork down to the first line (2.5mm up) like I did to help straight line stability.

Suspension: WP has changed their settings for both manufacturers in 2021 as the two brands each has proprietary settings. The KTM has a firmer feel that I prefer because when I start pushing the orange machine it simply has less movement for my liking. Going up to an 11 bar reading on the AER fork as well as a slightly slower rebound setting really helps calm the front end down coming into corners and lets front end steering riders enjoy their technique more around the track. The rear end is not as finicky to set up as the front so going to a 104-105mm of sag along with a slightly stiffer low speed compression setting on the shock will be something that riders 170 pounds and over will appreciate. If you’re over 200 pounds, going to a heavier shock spring will help balance under acceleration.

Engine Feel: The Husqvarna FC450 has a smoother roll on power than the KTM and less low end excitement. The airbox as well as the muffler is a little different on FC and to me these two parts are the reason for a more connected/smoother corner exit feel. Mid range however the FC450 starts to show you why it’s one of the most seamless power deliveries in the 450 game. The Husqvarna has a wide mid range that allows longer second and third gear shift points, that the KTM doesn’t quite have. Top end/over-rev also pulls slightly longer than the KTM spread and vibration of the engine is not as apparent. It might build RPM’s too slowly for some 450 sized riders, but lighter riders will appreciate the engine character. The ECU setting although better for 2021, just feels different than the KTM. It still has a slightly rich feeling overall and maybe with the new “ECU Tool” that KTM/Husqvarna will be coming out with, can help some of the Husqvarna’s low end laziness.

Chassis: Having the lowered 10mm suspension setting is noticeable the moment you hit your first corner. The Husqvarna feels lighter in area 1 of the corner, but needs more engine excitement for area 2 (when getting on throttle). Area 3 of the corner however, the rear end of the FC450 feels more planted than the KTM. I get more rear wheel traction out of corners as the overall feel of the Husqvarna does feel lower to the ground under throttle. Straight line stability is better on throttle with the Husqvarna, but to me, off throttle, the KTM holds up better, which allows me to charge into corners harder.

Suspension: Husqvarna/WP will tell you that they set up their 2021 suspension settings for the average consumer that wants comfort out of their motocross machine. They succeeded in getting less mid stroke harshness (de-cel) out of the AER fork, but to me the setting is still too soft. I also understand that I am not the target consumer Husqvarna is trying to market this bike to, so I took this into consideration. The action of the fork is smoother feeling than last year’s fork setting, moves less in the stroke, but gives the rider a considerable amount of front end traction (for an air fork) on braking bumps. This new lower 10mm AER fork will feel low if you’re a heavier or aggressive type of rider, so going up to10.9 bar would be in your best interest. Slowing the rebound down a couple clicks on the fork will also slow the action down a little even more and keep it from diving too much on jump faces and g-outs. Also don’t forget to bleed your AER fork before every ride. Yes, it has bleed holes. I noticed the Husqvarna is more temperamental to this.

The WP rear shock still likes a sag of 105mm, but the overall feel of the shock is slightly empty feeling (soft) at the end of the stroke. If you’re slamming into steeper jump faces or g-outs you will bottom out and see rubber marks under the rear fender fairly quickly. If you’re experiencing a lot of this, stiffening your high speed compression a quarter turn and turning in your low speed compression a couple clicks will help the shock’s end stroke feel. What the 2021 rear shock does do better than the 2020 is offer more rear wheel traction on acceleration bumps. The rear wheel drives through square edge chop better and doesn’t give the rider a sticky feel like the 2020 shock did. The lowered Husqvarna setting to me benefits lighter or shorter riders much better than the KTM.

Which Bike Is Right For Which Type Of Rider?

Even though both of these bikes are great machines we put our thinking caps on and thought of a few different types of riders. Below is a list of a few labeled riders, so if you think you can relate to one of these riders below, picking the correct color should be made easier for you. However, if you still can’t make a decision after viewing these, my door is always open at kris@keeferinctesting.com. Maybe I can help you further.

Ergonomics For The 6’0 And Under Rider: Husqvarna FC450

Who Wins The Durability Test? I have ridden both of these machines a lot and will say that both of these machines have been great, but to me KTM has a less chance of breaking. I have broken one sub-frame on a Husqvarna FC450, but past that, I haven’t had any problems with the FC. Both machines require you to check engine mount bolts as well as sprocket bolts so get your blue Loctite ready!  The life on the clutch of the KTM is unbelievable as I can get up to 30 hours on a clutch (and I am hard on clutches). Replacing the fuel filter every 10-15 hours or so, in both machines, will prevent any problems down the road with your fuel pump. Rear brake pedal springs absolutely suck on both machines so get yourself a Honda CRF450R rear brake pedal spring and thank me later.

Who Wins The MSRP/Contingency Battle? The KTM contingency is better than Husqvarna’s at most races in 2021. So if making some money for parts is your think when you race, go the orange brigade route.

Who’s Best In Which Category?

If you’re really dissecting on which part of the motorcycle is most important for you when riding, below is a ranking on who is better (albeit it could only be slightly better) in over 30 categories! Again, there is no winner or loser in this test, but it’s about which bike is best for you!