East Vs. West? Yep, you heard it correct.

Kenny here with Keefer Inc. Testing and West vs East is my new focus, no this is not a competition of what coast has the best riders, or dirt, because we know that east coast has the best dirt, but simply trying to solve a burning question I’ve had personally. WOULD MY SETTING STILL BE APPLICABLE ON THE EAST COAST? This is something that I wonder at times and get asked a lot since I am an east coast native. Now that I live on the west coast and can migrate over to the east easier now to ride, why not quarterback this question a little more right? Keefer gave me a 2021 KTM 350 SX-F test sled to ride for the year and I was headed to my good buddy Luke Renzland’s place in Florida, so I thought this could be a perfect time to weave in a little test. Now “Dreamland” has a lot of sand, big jumps yet also has a mix of clay too. Unlike Southern California where Fox Raceway and State Fair is the softest dirt we have, Renzland’s place almost has a mix of all the conditions in one track, but the sand is much softer/grabby. In one area there will beach sand, in others deep clay and even in some parts of the track it will have a sandy/clay (AKA heavenly loam) in others.

Although I’m not the most experienced tester, I take pride in saying I’ve spent lots of hours on my dirt bike from coast to coast so I have a fairly good feeling on the bike. In this recent trip to Florida I had a very eye-opening experience that made me question some of my statements that I’ve relayed to the listeners/readers in the past. Over the past year I’ve fully adapted to the “west coast” style of riding as well as set up, hard pack – square edge tracks with some high speed, hang it out sections and the minute I did my first lap on a Florida sand track…..Well, I’ll just say it felt like my first day of riding back east again.  I spent the first hour of my day trying to understand how to ride sand and while I was taking a break trying to reduce the size of my forearms, I realized that my set up in California may not work on this rough, whooped out Florida track. I needed to get stiffer with my settings.

Immediately, I went stiffer on compression on the fork/shock.  The braking bumps form up different on the east coast, bigger, more spaced out and they get cupped out, so I found my suspension being further down in the stroke all the time when my throttle was turned off. There was noticeably more chassis pitching than out on the west coast and I could even use less engine braking out here on the east. I didn’t have a tunable ECU on hand to try this, but from my experiences that I have had with the Vortex ECU, that would have been a nice feature to have on the east coast. Less engine braking in softer conditions relaxes the machine and doesn’t bind up the chassis going from on/off or off/on throttle. I also noticed that I get way more ass end high feel coming into corners because my fork was diving too much. My sag stayed the same at 98mm but on the high speed compression (on my shock) I changed from 1 ¾ to 1 ¼ out, allowing the shock to ride a bit higher in the rear. Now this may sound contradicting to some, but I did manage to go up on my air pressure to help balance out the higher feeling rear setting I was creating for myself. On the WP AER fork I also added more air pressure (up to 162-164 PSI from 155) as I was searching for more hold up. Once I did manage to tweak my west coast settings this gave me more confidence going into the bigger east coast bumps harder. The balance of the stock suspension felt better and I also noticed less harshness from the AER fork in the softer terrain than on the west coast where the bike can feel too rigid. 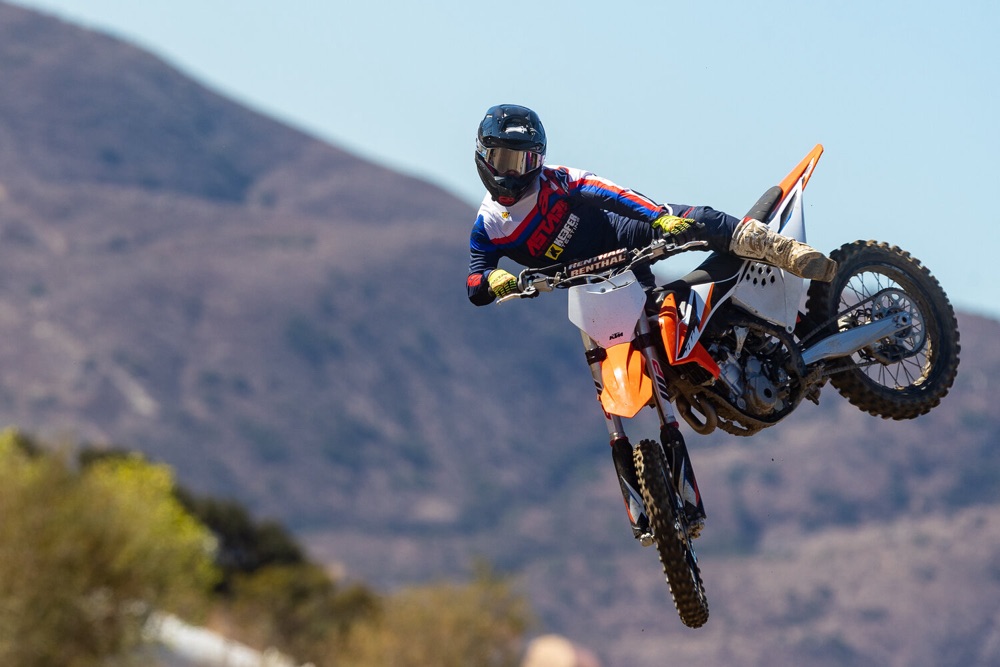 Although my changes were not major, the biggest thing that stood out me is how different the characteristics of the bike felt when comparing the different soils. The 2021 KTM 350 SX-F shines on hard park tracks of California and unlike the AER fork, the frame does a great job at absorbing the choppy conditions. However in the Florida sand, I found the frame had slightly too much flex in heavy load situations, which left me wanting to stiffen the bike up. This is where I would love to try some engine mounts or something to get me a little more stiffness under on throttle lean situations. On these east coast tracks, the KTM 350 SX-F wanted to wallow under load and then snap back the opposite way one off throttle. Going with a little stiffer chassis setting can help this area. The engine characteristics were similar from coast to coast, but I found myself revving the 350 out longer in order to get the orange machine to move forward in a hurry more through the sand. I feel like I wanted more torque feeling in the softer conditions (Map Two) and could handle more power, unlike the west coast where I liked that longer more linear/smoother power (Map One).

So to answer my own (and maybe yours) question of “ are the bikes still as good on the east coast”? My answer would be yes they are, but you will have to set them up differently than what these Cali magazine guys tell you. Luckily for us Keefer does have a sand track near his home in Hesperia, so at least his baseline settings that he posts are a blend of sand and hard pack/loamy tracks. Not east coast style but at least it gets you closer to east coast settings. The tackiness of the east coast dirt is like no other and I am fairly sure that Keefer and I will be going back east more in 2021 once this pandemic is over! The 2021 KTM 350 SX-F was still an absolute dream to ride for me on the east coast ( I love this bike), but I can certainly say that a little more bottom end power is in order on this machine for anyone that is living back east (that is a heavier rider or an intermediate level rider or above). For more specific details on my baseline settings for both West and East please see below.