On My Own Dime: Scott Prospect Roll Off System

Although I am an off-road guy through and through, living on the west coast doesn’t exactly give my inner Scott Summers many opportunities to splash around in the mud.  It almost never fails that we get some showers throughout winter, but it’s pretty rare that we get a full on storm that coincides with a motocross race. Adding to the odd times of 2020, my phone informed me that the chance of rain was 100% for the 2020 Dubya Vet World Championships at Glen Helen. I have always been a person who likes preparing for things, but since becoming a father, dad prep has become a real thing. Come race day morning, I’m always ready to take on the world (and wipe its ass with my extra baby wipes). The night before the race I was prepping goggles and I remembered that I have one pair of roll offs that stay in my goggle bag just in case. I switched to wearing Scott Prospect goggles 99% of the time a few years ago when I tested a pair and loved them. I bought a pair and they have always been tucked away in my bag. To me they are more like a “if all else fails” option that I never want to use because they came pre-assembled and to be honest, I didn’t know how to rebuild them if I ever got them muddy. That’s when it hit me, I had worn them last year at the Tecate sprint enduro (mind you I only pulled the string three times because I wasn’t used to wearing roll offs) and never rebuilt them. I knew if I rolled the dice and didn’t rebuild them before the race, I was for sure going to need them and if I used them without rebuilding them, I would surely runout of pulls because that’s how life works. So I cleaned off the bench, got out all the rebuild parts, laid out a towel and went to work. 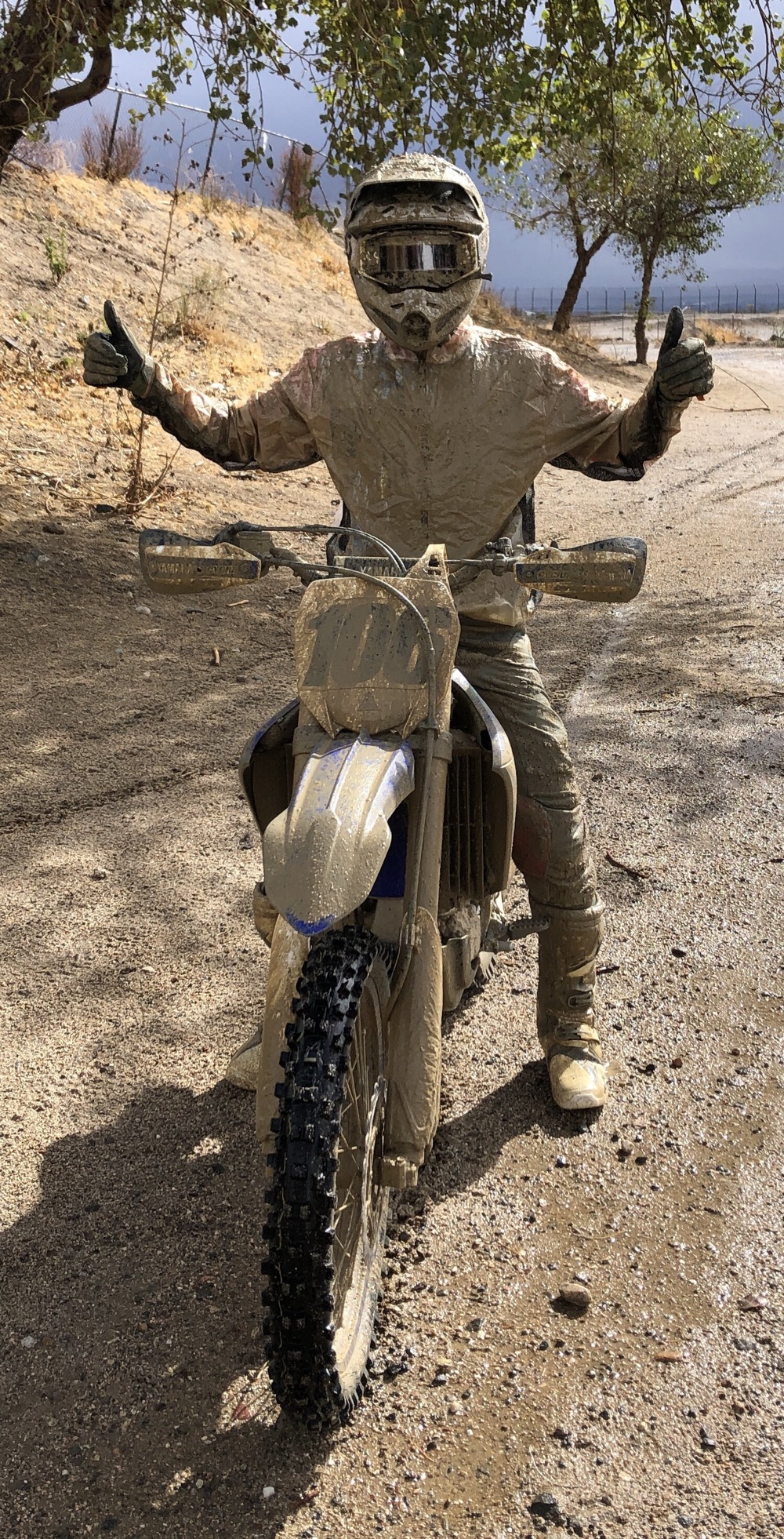 To my surprise, building the Works Film System was far more user friendly then I had anticipated. With the help of the how-to video on Scott’s website (https://www.youtube.com/watch?v=JZr_4zkb12Y)  it only took me about 10 minutes until they were ready to have muck thrown at them. The canisters are very easy to clip on and secure to the lens, the anti-stick grid pops right on and the pre rolled film comes with a little sticker to use on the opposite side so you don’t need additional tape.  There are only two challenging steps of rebuilding the WFS; the first is getting the roll started straight on the dirty side because if you don’t start it straight the film can start rolling off center and cause issues. The other is getting the top of the film under the “mud flap” all the way across the goggle. I’m sure those steps will become second nature after a few more mud races although that may take a few years living in southern California.

Just as the weather man said, as soon as morning practice came to an end and the national anthem was being sang, the skies opened up. As I headed to the line for my first moto I kept the goggles in their bag, tucked inside my riding raincoat (yes I’m an off-road guy who came prepared with many jackets, vests and raincoats). It’s funny how as racers we will take our nice clean bike to a mud race where we know the grit and grime is going to be mashed into every crevasse without batting an eye, yet as we go to the line, keeping our goggles and gloves clean and dry becomes more important than our first born child. As the gate dropped I quickly found that racing a 250f against 450s may have its advantages on some parts of the track, but the start straight at Glen Helen wasn’t one of them. Simultaneously I learned that once I was brave enough to take my hand off the bars and pull the string, the 50mm wide film on the WFS provides a larger view than most roll off systems. Luckily I pulled the string just in time to see more muck being thrown my way as the field of 450s seemed to be shrinking in size roaring into Talladega. The anti-stick grid that is between the lens and the film creates a small air gap so that if there is any moisture between the two surfaces, it doesn’t create any viewing distortion. In addition to the anti-stick function, the mud flap across the top creates an overlap so no moisture can come from above the film and create distortion. Throughout both moto’s that day, the WFS worked just as advertised and never left me in need of more clean film. The system can be bought separately for $40.00 or pre-installed on a set of goggles for $109.95. After spending my hard-earned money on the WFS, I am completely satisfied with the product and would recommend it to anyone who needs a straight forward roll off system with a wide peripheral field of vision. If you have any questions about the Scott WFS system feel free to reach out to me at Michael@keeferinctesting.com.