My son loves riding his 2020 KTM 125SX, but comments all the time on how he feels like the KTM sits taller than his Yamaha YZ125. When I watch him ride I notice that the rear end of his 125SX kicks him in his ass when hitting braking bumps and when that happens, it makes the front end dive too much on corner entry. He only weighs in at around 115 pounds, so going down a spring rate on the shock was a must, but to me, the bike still looked unbalanced on de-cel. 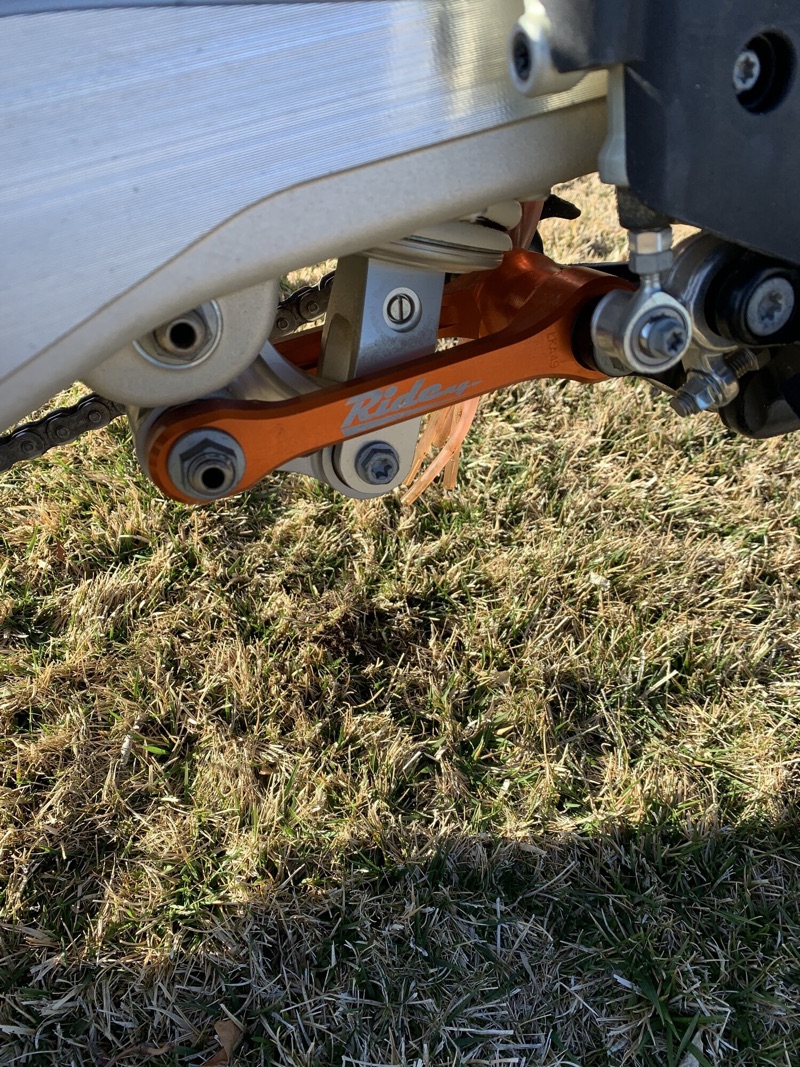 I called up Adrian at Ride Engineering and asked what he had for the KTM 125SX and we both agreed to try a rear link to see if that would help balance out the bike. This Ride Engineering link lowers the back of the KTM 125SX chassis by 7mm to try and improve the ride balance. I set the sag at 103mm with the Ride Engineering link versus the usual 105mm of sag that we were running on Aden’s KTM. Just know that you might have to adjust your air pressure setting on your AER fork to get the right front end feel, since you’re dropping the rear of the bike with the new link (more on that below).

For this test I had two KTM 125SX machines. One was set up for my son, with his softer shock spring and one was just a bone stock KTM 125SX with the sag set for me at 105mm. We started later in the day at a couple tracks on separate days to make sure the track was nice and broke in before we started to make our changes. Doing this ensures that the track doesn’t change too much from each change we made to the orange machines. With the Ride Engineering link I noticed better tracking/acceleration coming out of choppy corners and slightly more stability off-throttle. I really liked that the link helped the ride attitude of the KTM when leaning, under throttle, on choppy terrain. I had more trust in the KTM when loading the chassis hard on throttle. I didn’t get near as much kicking coming down rough hills and the overall cornering character didn’t suffer. I was worried that this Ride Engineering link would hurt turn in, but to my surprise it didn’t affect the KTM’s easy natured turn in character.

Aden’s comments didn’t exactly mimic mine, but one comment that actually made sense was he did like that he felt lower to the ground, when sitting, and that helped him with his starts. When watching him ride the bike was visibly less busy in the rear and didn’t give him as much kicking on de-cel. The length of the Ride Engineering pull rods are 1.3mm’s longer than stock and come in at a 149.5mm overall length. Aden doesn’t know enough about chassis testing to give me some great feedback, but some of his comments overlapped mine. I more or less watch the bike when he rides and then decide if it’s a good direction or not. We decided to leave the Ride Engineering link on his bike after we both came to an agreement that he looked/felt better on a rough track with it on.

If you do decide to get the Ride Engineering Performance Link just know that you may have to adjust your AER fork pressure, if you’re still on air forks. Now with the Ride Engineering pull rods installed the rear end will ride a little lower, so the front end might seem a little high. Dropping the air pressure anywhere between .2-.5 bar might be needed to get some added front end traction. We dropped Aden’s air pressure from 8.3 bar to 8.1 bar at some tracks and even down to 8 bar at others. Try running your normal AER pressure when you first put on the Ride pull rods and see how your front end feels though corners. If you feel like your front end is tall, your front end is pushing, or have a vague front end feel, just try to drop your air pressure slightly. This will help let the fork use more of its stroke and get that front tire to bite into the ground more.

The Ride Engineering Performance Link comes complete with bearings and seals and is not that difficult to install. I literally changed the link out at the track on several days. If you’re looking to get a little more stability and rear wheel traction without sacrificing cornering, then you might want to try this link. MSRP is $219.95, but you can use the code Keefer-20 to save 20% if you want to order through ride-engineering.com.