In a world where most people think that two strokes are dead and four strokes rule, there is one company (or two depending on how you look at them) that has continued to progress two stroke technology. Husqvarna is one of three (KTM, Husky, and TM) motorcycle manufacturers who have released fuel injected two strokes in the last four years. Husqvarna released theirs in 2017 and after riding it I was pretty impressed. Now that they have been around for a few years I was excited to see how polished the latest model was compared to the first-year bike. The 2020 TE 300i is Husqvarna’s model that is aimed at the trail rider and not necessarily the racer. Although the TX (the race version) and the TE share the same engine and chassis they have two distinct differences from one another. The main things that makes the TE more of a trail bike is the WP XPLOR fork which is an open bath spring fork. The other main difference is that the TE comes with a headlight and a tail light in case you get caught out on the trail after dark. In all honesty, when I went down to Husqvarna to pick the bike up I wasn’t a fan of the bike aesthetically. I thought the grey plastic accents didn’t look right and I didn’t like the shape of the body work. That being said, over the past few weeks the bike has started to grow on me. I can’t explain why, but for some reason I have totally changed my opinion and now I think it looks good. 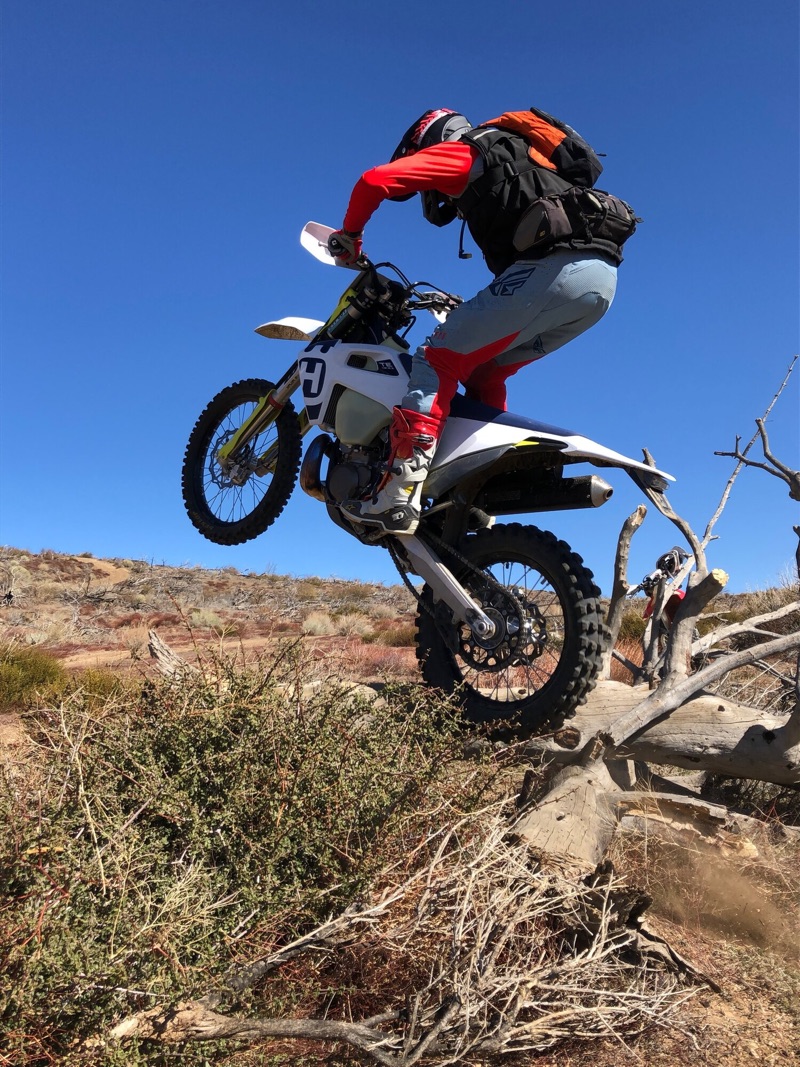 The 300i has an MSRP of $10,099 and comes with quality handguards that are very sturdy, as well as a skid plate with decent coverage that is easily removable with two bolts. For 2020 the exhaust system on the 300i has some big changes. The head pipe is narrower and gives the bike slightly more ground clearance than the previous model. In addition to more clearance, the new pipe also has a 3D design with corrugation in the metal, which makes the pipe stronger and less susceptible to damage from trail debris. The silencer has a new aluminum mounting bracket and less dense packing for better noise damping. The engine on the 300i is electric start only and comes standard with a li-ion battery which is 1kg lighter than a conventional battery. With keeping mass centralization in mind, the starter is mounted underneath the engine keeping the weight down low. The wiring harness is all new and looks cleaner as well and concentrates all of the electrical components to a central area for ease of service. The EMS (engine management system) controls the fuel mixture as well as the mapping, which is new for 2020 as well as having a new ambient air pressure sensor to make the bike respond better to differing altitudes.

Unlike traditional carbureted two-strokes of the past, the 300i uses a throttle body that is controlled with two cables that open a butterfly valve that lets more air into the intake and mixes with the oil, which lubricates the crankshaft, cylinder and piston. On the right side of the Pro Taper handlebar, the 300i has a map selector switch which gives the rider the option of a softer or more aggressive power characteristic.  The frame on the TE is new with hydro formed tubes, new geometry, and added longitudinal and torsional rigidity. The TE 300i engine is mounted 1 degree lower at the swing arm improve front wheel traction and feeling. The frame is finished in a dark blue powder coat and comes with frame protectors. The new sub frame although still made of a carbon composite has been made slightly lighter and is 50mm longer to help with the handling of the bike. Like I said before one of the main differences between the TX and the TE is the fork. Being that the TE is meant for slower speed and extreme type terrain, Husqvarna decided to go away from the air fork for this model and use the WP XPLOR fork. The XPLOR fork is 48mm and splits the rebound and compression between the right and left fork tubes. The left fork tube controls the compression (30 clicks) while the rebound control (30 clicks) is handled by the right tube. In addition to the adjustability of the damping, the XPLOR fork also gives the rider the ability to adjust the fork spring preload (3 clicks) with an adjuster on the top of each fork tube. The rear suspension on the 300i has a new piston and updated settings as well as motocross inspired linkage which sets the rear of the bike lower, improving traction in extreme conditions. The radiators on the 300i are also new; mounted 12mm lower (centralizing the mass) and are integrated into the frame which helps with the bikes ability to cool more efficiently. The 300i doesn’t come with a radiator fan (it’s available through the accessories catalog) I feel like it should since it’s designed to be ridden in the most extreme environments. Unlike the KTM which comes with Brembo brakes and clutch system, the Husky comes with Magura components that are mated to the 260mm front and 220mm rear rotor. The Husky also relies on Pro Taper to handle the bars and ODI for their lock on grips. 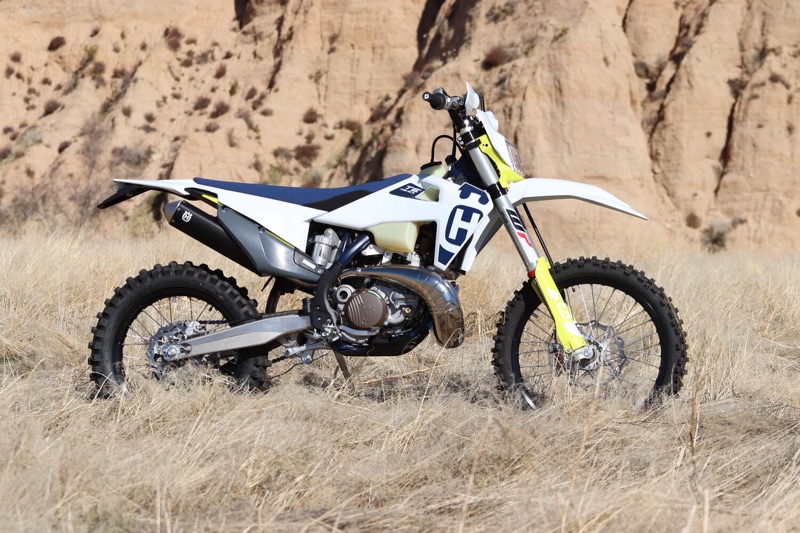 Now that you know all the new and technical data, let’s get into how the TE300i feels out on the trail. Starting with the engine: the E-start 300i always starts quickly and comes to a perfect idle no matter the elevation or temperature. The 300cc engine has a counter balancer which has made vibration a thing of the past. One of the things I used to hate about 300cc two-strokes was the annoying vibration you got after a long ride that would leave you with tingly hands. This engine honestly vibrates less than my YZ 125 which is super impressive. The power on the 300i is all about the bottom end pulling power. This bike LOVES to be short shifted and in fact has made me completely change the way I ride. This two-stroke really benefits from being ridden like a four-stroke so I had to get my mind wrapped around being a lugger again (you guys should know what a lugger is). The power tractors through the bottom into a very meaty mid-range, but then quickly tapers off as the revs increase. Once through the middle of the rpm range there is no point in trying to scream the bike unless you’re hill climbing and need the wheel spin. That being said, if you ride the bike a gear high, you’re rewarded with gobs of torque and an engine that is damn near impossible to stall. The other good thing about the pulling power is it doesn’t have a light switch character that is commonly felt with to two-strokes. The “power character” is so broad on the 300i throughout the rpm range, it never seems to fall off from making power when the engine is under a load.

Being that the TE 300i is designed to be a trail bike and isn’t necessarily directed toward the racer (they sell the TX 300i for cross country racing) the suspension is understandably on the soft side. Unlike the TX, the TE doesn’t come with an air fork and instead comes with the WP XPLOR fork (open bath), which is a spring fork that splits the compression and rebound to each fork tube. Even though the TE is meant to be a trail bike, in my opinion it’s still sprung slightly too soft. The Xplor fork has a 3-way pre-load adjuster, and even with the preload on the stiffest setting, the fork was still too soft for my 6’ 185lb frame. In tight technical terrain the soft/springy feeling was welcomed, but when speeds pick up and I started driving into braking bumps, the fork doesn’t stay up in the stroke nearly enough and dives excessively under braking giving the bike a nervous feeling. The rear suspension isn’t as soft as the front, but still is not stiff enough when it comes to riding the bike at race pace. At 232 pounds the soft suspension gives the bike a heavier feeling when trying to ride aggressively on tighter trails. I think the Xplor fork has real potential and I’m excited to see how well the bike will work with stiffer springs.

I think it’s awesome that the TE comes with a headlight and on top of that the computer is a bonus, along with the ability to adjust the mileage for enduro events. I prefer the Magura brakes and clutch to the Brembo components that come on the KTM because I feel like they are slightly less “grabby” feeling. Although when riding the 300i it sounds corked up and quiet, when listening to the bike hill climb or be ridden aggressively with another person on it, there is a crisp barky note from the silencer. The seat cushion is decent, but the cover is a little slippery. If I didn’t do a good job holding myself forward, I found myself sliding back under acceleration or up steep bumpy inclines. Overall I think Husqvarna did a great job making an easy to ride trail bike with the 2020 TE 300i. Although the suspension is soft for my riding style, the stock settings are a good starting point and give the rider some adjustment to play with via clickers/pre-load adjustment. I look forward to racing the TE 300i, and will be keeping everyone up to date with the modifications that are made and how they translate out on the trail. If you have any questions about the TE 300i feel free to send me an email at Michael@keeferinctesting.com and I will try to help.