I get to test a lot of things behind the scenes and this Leatt GPX 5.5 boot was one of them. When I got asked to do some initial testing on this boot from Leatt a couple years ago, I was happy to help, but I warned them that I was a picky SOB when it comes to boots. I don’t necessarily have bad ankles, but I do like my ankles to feel secure/protected when I come up short on jumps. I also want a boot that doesn’t weigh a ton because my old ass doesn’t need any extra weight to haul around when I am doing a long Moto. I put in almost 100 sneaky testing hours in the GPX 5.5 boots and although we had some revisions along the way, these boots surprised me on how comfortable they were. With a price point of $389.99 you might expect not to get all the bells and whistles of a top tier off-road boot, but to me a lot of those boxes are checked with the GPX 5.5’s. The engineers over in South Africa, where the Leatt main offices are located, listened to any short comings I may have experienced with the boot during initial testing and fixed those problems along the way. After riding with these boots in silence for a while, here are some of my findings with the final production version that could be of use when maybe looking to purchase a pair of new boots in the future. 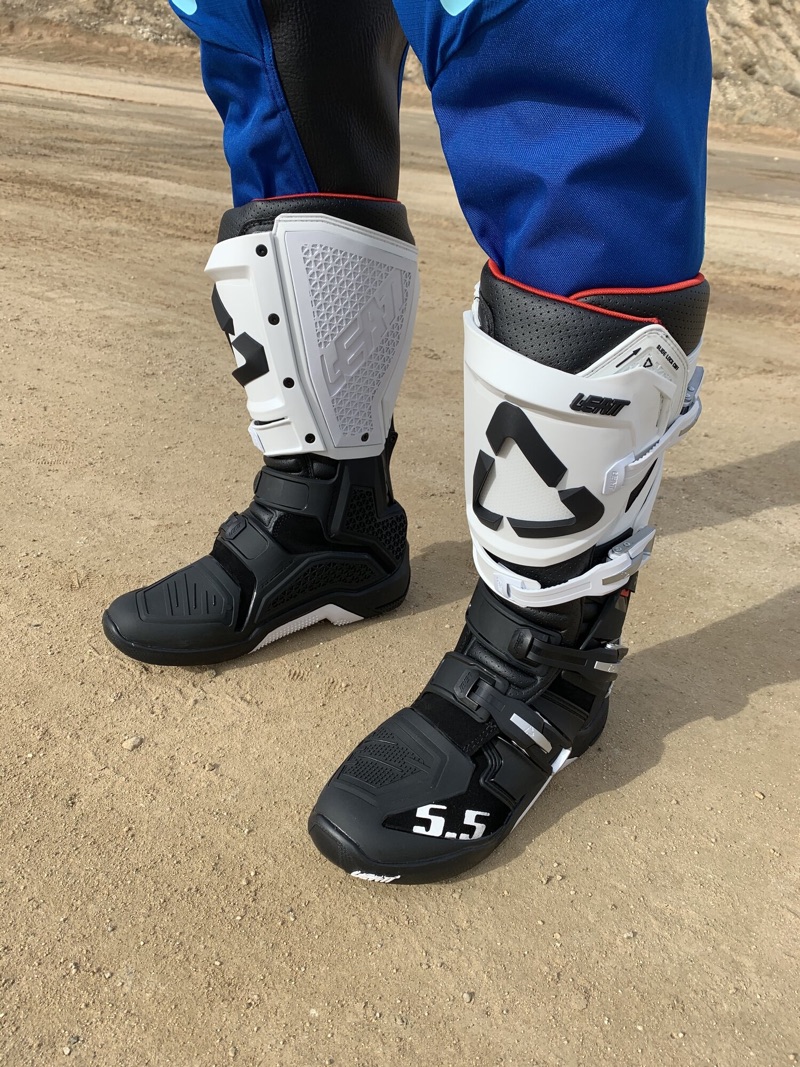 I do know that Leatt is committed to protection, but getting a boot to look good is tough to do. I feel Leatt did a good job of getting a boot to look unique without it being ugly looking. The Leatt 5.5 boot comes in three different colorways and should please even the pickiest of gear snobs. The GPX 5.5 boot uses a FlexLock system that makes for adjustable boot flex, lockout of ankle movement, force reduction to ankle (up to 37 percent) and knee-force reduction (up to 35 percent). It has a SlideLock Velcro top closure, 3D-shaped impact foam over the ankles, a heel-grip ankle design and the toe box is low-profile and shifter-friendly. The Leatt boots’ sole has a DualZone hardness and has an extended footpeg zone to accommodate varying riding styles with a steel shank for additional support. It uses a grip material inside of each boot for rider feel, the buckles are forged with an over-locking function, and the inner liner is breathable mesh with anti-slip reinforcement for zero heel lift.

For reference, I feel like the Fox Instinct boot is one of the only boots that I am able to ride with right out of the box without any break in period. The Leatt 5.5 boot doesn’t quite have that instantaneous take out of the box and ride feel, but does break in quicker than a set of Tech 10’s. It’s unique with its FlexLock design that actually DOES absorb energy, yet offers a good amount of feel on the brake/shifter. This is one area where a non-hinge boot usually lacks in feel and requires a longer break-in before you get totally comfortable with mobility, shifting and finding the brake pedal. The FlexLock is a multi-directional system that allows the boot to hinge forward and backward. Additionally, it has an inward and outward flexing ability that is designed to mirror your ankle movement. The amount that the boot flexes in this direction is limited by the FlexLock system.

The Leatt GPX 5.5 has far better foot mobility than a normal non-hinged boot, yet gives you the ability to lock out as much ankle movement as you want. The GPX 5.5 size 10 weighs just under nine pounds, which is around the same weight as most mid to top tier off-road boots. For most riders, especially us older guys, the lighter the boot, the better it can be for our legs, as it’s easier on your knees and mobility. It’s funny because when I weighed the boots I was expecting the GPX 5.5 to weigh less than it did because when riding with them, it didn’t feel like nine pounds of boot on each leg. They feel lighter than a Tech 10 and DO NOT cause my legs to get as tired when the track is deep.

I love the GPX top SlideLock closure (you can secure the Velcro, then buckle the top strap, which slides against itself in one direction), it’s simply genius! I appreciated the grip of the sole and how long the sole lasted, especially during my durability test of the boot. You can do yourself a favor and make sure to keep an eye on the small screws that hold some of the plastic pieces on the boot together as they can back out over time. If you are concerned about the fit for wide feet, don’t be alarmed as I feel the GPX 5.5 boot accommodates a wider foot. I don’t have a wide foot, but a couple of my test riders do and they didn’t complain about pinching. I however did get a pinch initially near the top of my foot during break in, but once the boot seated to my foot, the pinch went away.

With the minimal break-in time, the fit as well as the feel through the ankle, along with the ease of the buckling system, I feel this is a lower cost option for the off-road consumer. I felt that the protection and comfort levels rated high, the durability of the boot was adequate and the price is very friendly, considering the high-end appeal of some other boots.  As of right now, I have around 28 hours on the production Leatt GPX 5.5 boots and plan to at least get to the 50 hour mark.

If you have any questions about the Leatt GPX 5.5 boots or anything that relates to dirt bikes, Keefer Inc. Testing is here to assist in anyway we can. Email me at kris@keeferinctesting.com for any philosophical thoughts or questions.