As some of you might know, I’ve been racing Supercross and Motocross for the past few years as a privateer. The privateer grind can be tough and sometimes it can take the fun out of racing. This past January I broke my back in a practice crash while prepping for Oakland SX. At the time I had two 2019 CRF450s and after the crash I decided maybe it’s time to hang up the boots on this whole racing thing. In my six years as a pro I’ve had more injuries than I’d like to admit and it was starting to really wear on me mentally and physically. Cut to a few months later, I’d sold both of my bikes and for the first time in a long time, I didn’t have a bike of my own. I had been riding and doing some testing on Keefer’s RM-Z 250, when he convinced me to come out and race at a local vet race (my first ever vet race, as I just turned 25). I raced his KTM 450SX-F Factory Edition, and had a blast on it and so my relationship with the KTM began. 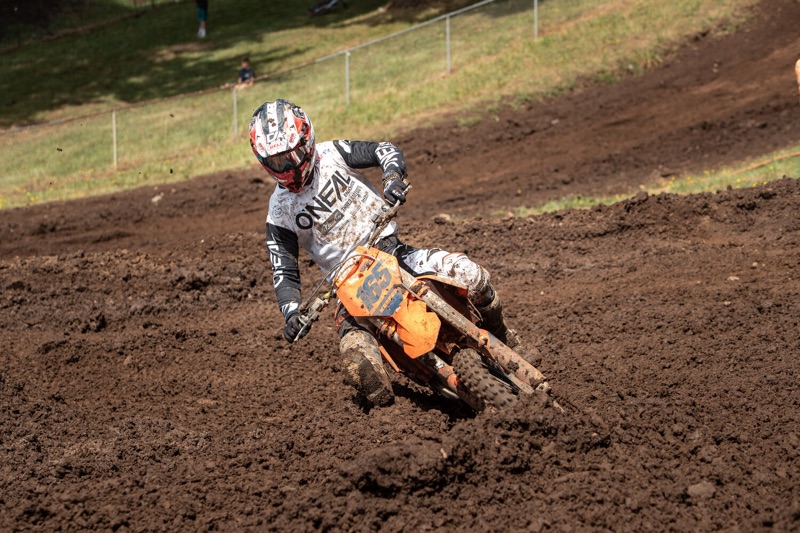 Over the past few years I’ve ridden steel framed bikes a couple times a year, at shootouts or just a random day here or there. However, I never spent enough time on one to really get comfortable. After the vet race Kris let me hang onto the KTM and I got to spend some real time getting used to it and making adjustments… And well… I fell in love! I’ve owned and raced Honda’s since 2015, so needless to say I’m super comfy on red bikes. Honestly I never saw myself riding anything else.  But after the first few rides on the KTM I really started to like it. I’d ridden Honda’s for so long that a rigid, sometimes harsh feeling chassis was just something I’d gotten used to. The steel frame has slightly more compliant feel and softer initial touch through the choppy stuff, but I can still corner it just as well, or sometimes better than my Honda.

The KTM feels light in the air and easy to move around on the track.
In a lot of ways it’s the best of both worlds. You get a more compliant chassis, which is what people love about the Yamaha, but you also get precise handling and great cornering like a Honda.
Between the KTM’s amazing Brembo brakes and the added flex in the chassis, I have an overall more connected feel to the ground. Every time I ride it I’m surprised at how much front wheel traction I have and how easily I can catch those shallow California inside ruts or “dishes” as I like to call them. I really enjoy the powerplant on the KTM as well. In stock form the engine is a bit boring of the bottom but comes alive from mid to top. Kris put an FMF 4.1 system on it and had Chad from XPR take care of mapping with a vortex ignition. Just those two mods woke up the KTM a ton. It now has much better throttle response. added rear wheel connection and mid to top end that has more pull than you’d probably ever need. Yet it still retains the easy to ride/predictable bottom end character of the stock engine. 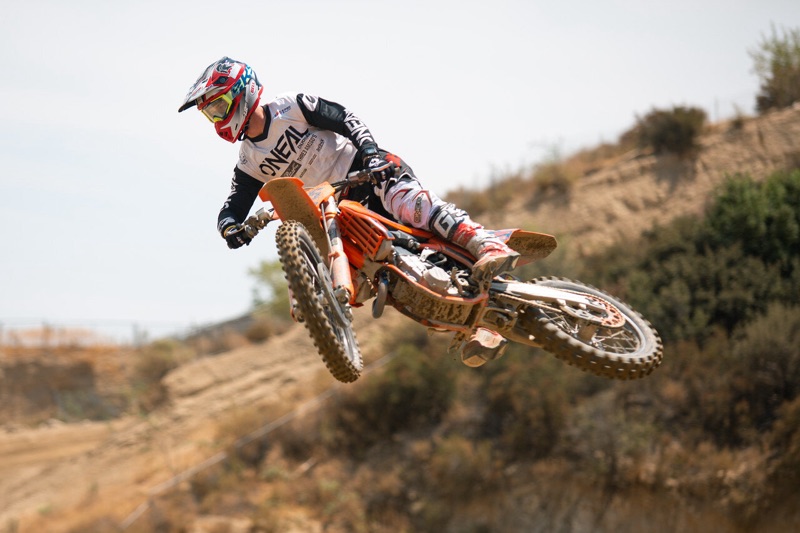 For suspension, Kris had a WP Xact Pro fork and shock that was done by Mark at REP/AEO suspension. The Xact Pro fork is a cone valve spring fork and ditches the stock AER air setup. On the track, Mark’s setting was a bit stiff for local tracks, but it had a lot of performance/ hold up when things got rough and I really started to push it. I tried two different settings with Mark and ended up liking the softer of the two. In the meantime while Mark was re-valving the fork, I decided to give the stock AER fork a shot.
I was pleasantly surprised at how well they worked. On a deep/loamy track, with good traction, I feel that they can be just as good as a spring fork. They have excellent bottoming resistance and a surprising amount of feel compared to other air forks I’ve tried in the past. When things start to dry out and harden up though, I’d like just a little more initial feel from the AER setup. Don’t get me wrong, they’re still very good and for someone on a budget, it would be hard to justify the price tag of the Xact Pro components.

In the past two months I’ve put almost 20 engine hours on the KTM 450SX-F and as we are approaching 80 hours I have to say I’m very impressed with KTM’s durability. The engine has never been opened up other than a routine valve check at 50 hours and there has been zero issues along the way. In the 50 hours before I started riding it, the clutch was replaced once. I’m not much of a clutch abuser and have been riding the last 30 hours on the same clutch with no signs of slipping/dragging. I’ve raced the KTM twice now and have spent long hot days in the desert as well as most of our local SoCal tracks. It’s easy to ride, it’s easy to maintain and most of all I’ve just been having a lot of fun riding it! As I guy who wanted to quit racing earlier this year, riding this bike has resparked the flame and as of now I plan on lining up at a few outdoor nationals later this summer. 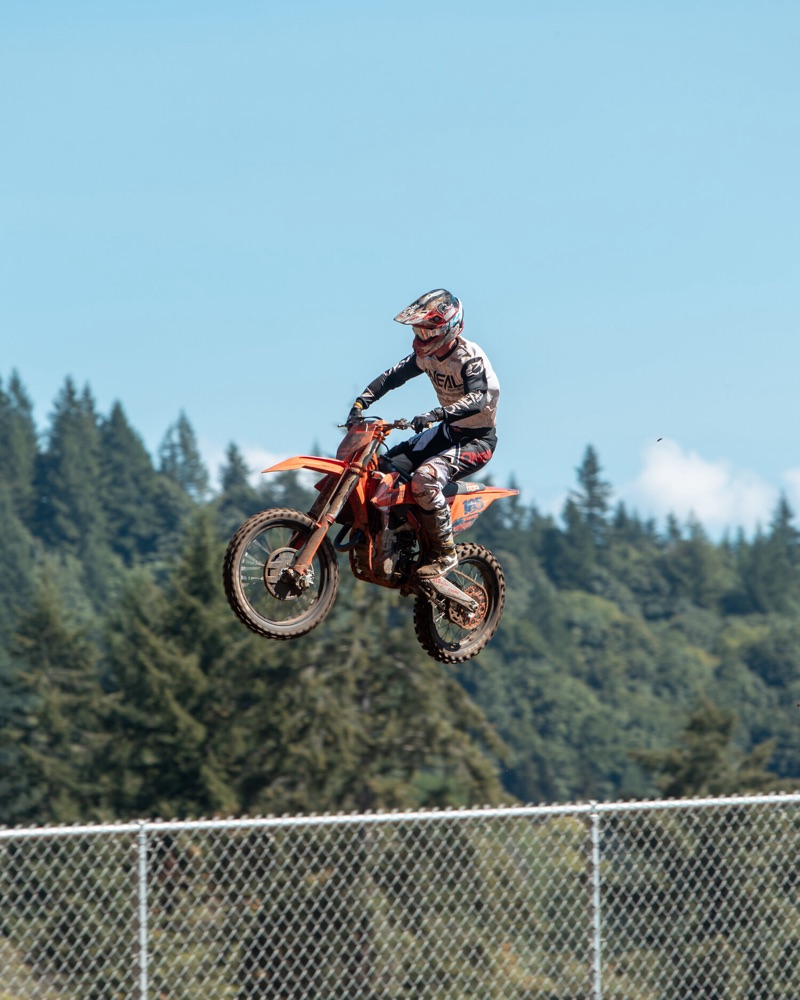 It’s easy to love a bike when it’s free to ride and you just give it back at the end of the year when you’re done with it. But when I say I love this bike, I mean it. I just recently put my money where my mouth is and purchased a 2020 Husqvarna FC450. I know KTM/Husqvarna hates the comparison, but let’s be real. The two bikes are very similar in a lot of ways. Why did I chose Husky over KTM? My local dealer, who’s sponsored me for years sells Husqvrnas, not KTM, and I was able to get a great deal. While I haven’t spent a lot of time on the Husqvarna yet, the two bikes are similar enough that I feel confident they share all the traits I’ve grown to love on the KTM. If you see the white #526 at your local national, stop by and say hi. I’ll be the guy out there having a blast just loving racing my dirtbike again!