Although I ride year around, winter in Southern California is my favorite time of year because it means wet dirt, awesome traction, and prime trails. To me there’s nothing better than taking off from the truck on a cold morning into the unknown of a good trail ride. This time of year also gives me the chance to try some new off-road riding gear form various companies. Thor’s original roots may be in motocross, but they also have a long history in off-road racing and trail riding. I was pleased to see that they hadn’t thumbed their nose at us off-road riders and had a new line of off-road specific gear called “Terrain”.  I received the gear just before a good rain, and when the sun came out the next day, I was on my way to Kris’s house to put it to the test. 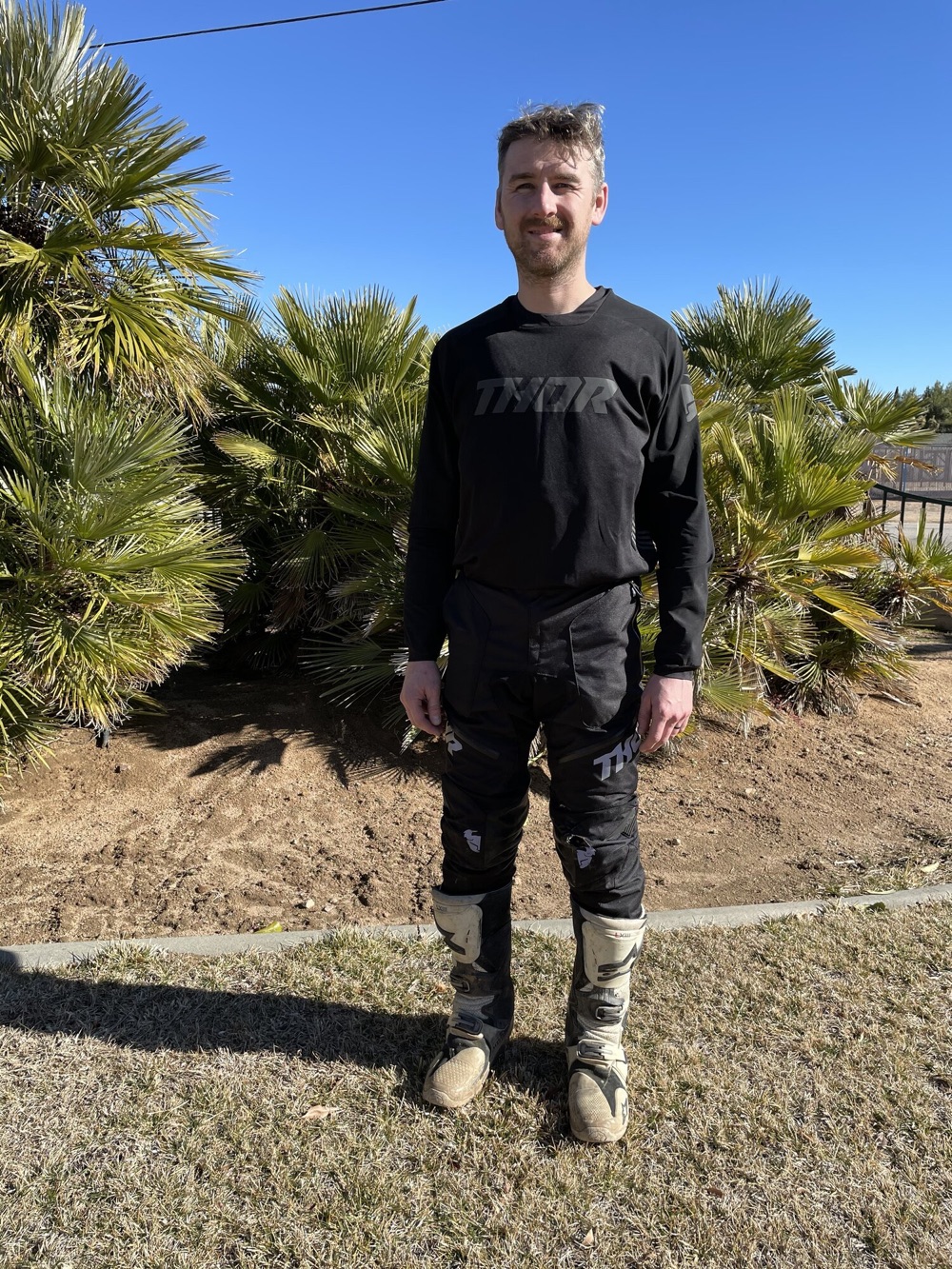 The Terrain jersey is made from a four-way stretch material and has abrasion resistant sleeves to minimize fraying when riding through thick brush. The paneling is vented to promote airflow, and raglan style sleeves have only one seam underneath the arm to try and minimize snagging. The pants are made with rip stop paneling in the high wear areas, use double and triple stitch seams and have full grain leather inside the knees for grip/durability. There are two external pockets with waterproof zippers and one internal hip pocket. There are waterproof zippered vents for better airflow when needed, and the waist uses a dual clinch to keep everything snug.

The Terrain jersey has a great cut when it comes to fitment (I’m 6’ 175lb and wear a large). Unlike a lot of off-road gear that can be baggy, the Thor jersey is form fitting without making me look pregnant after having that trailside beer. The stretch material on the neck is also a comfortable fit, not being too loose or too snug.  The venting works well, almost too well when its cold out, but that’s where the Thor Jacket /Vest comes in handy (keep an eye out for a review) the material on the sleeves feels a little stiff to the touch, but when on the trail it’s nice to not worry about snagging a bush and fraying your new jersey. Foliage tends to brush off the jersey instead of snagging and caching a seam.

When putting the Terrain pants on I noticed that the legs from the mid-thigh down were on the snug side and I really had to push to get my leg and braces (Asterisk) far enough down so that the waist would be far enough up on my hips. I gave them the benefit of the doubt and chalked it up to them being brand new and stiff since it was so cold outside. Unfortunately that wasn’t the case because I had to repeatedly fiddle with the mid leg sections of the pants due to them feeling tight enough to hinder my ability to move around on the bike. Since the pants felt sucked down in the knees, it made the waist slightly low and of course the crotch area didn’t stay high enough, so I found myself at every stop stretching out the crotchin order to situate the pants. That being said, the front button and double latch were comfortable and never came undone. Speaking of the crotch area, where there is traditionally a zipper, the Terrain pants have a panel that is always connected and just folds open or closed when buttoning or unbuttoning the front of the pants. When it comes to having a bathroom break on the side of the trail I found it hard to open the pants enough to get my junk (or stream for that matter) to clear the flap. The protective paneling worked well to fend off traditional off-road obstacles, but was no match for the new DR.D head pipe that doesn’t have a heat shield.  While the paneling may have melted, the leather inner knee area hardly showed any wear from the hot head pipe even after many close encounters. The zippered vents worked well and it was nice to have the option of opening or closing them dependent upon the temperature. Pockets are very important when it comes to off-road pants, whether it be for carrying your phone, some gel packs, or some spare tools. The placement of the pockets on the pants was less than ideal for a couple of reasons. One is that they are very hard to unzip in the sitting position, especially when wearing gloves. Secondly, that no matter what I stored in them, whenever I bent my hip, whatever was in the pockets, either limited my mobility, or jabbed into my hip/thigh.

I didn’t get a chance to try the Terrain gloves as Thor sent me some Draft gloves that were minimal for off-road protection, but very comfortable and although minimalist, they seem to be holding up well. One thing that is always a downside to off-road gear lines, no matter the company, is that there are limited colorways, but that’s simply due to the fact that the volume of off-road gear sold doesn’t justify the cost of investing into multiple colorways.  With the Jersey coming in at $59.95 and the pants retailing for $139.95 the Terrain off-road line of gear is on the pricey side for what you’re getting. With that said, just a few refinements would greatly improve functionality and mobility of the Terrain gear.