Let me preface this article with how much I like to ride the KTM 450 SX-F. But… Yes, of course there is always a “but”, right? I like a lot of things about the KTM 450 SX-F, but the stock suspension isn’t one of them. The AER fork is a slight headache for me as it’s stiff as hell when new, then once broke in, moves more in the stroke, yet still gives a harsh mid stroke feel on braking bumps. Not as much as in year’s past, but it still isn’t a spring feel. Raising the air pressure only makes the harshness worse and decreasing air pressure allows the fork to ride too low in the stroke for my taste. I am a front end steering rider and that means that I really like a spring fork feel. Now, I have tried some other companies spring conversions and although better than the AER fork with front end traction/feel, I just wasn’t sold on the performance it gave me on rough tracks. After doing some of these tests, I then resorted to a WP Cone Valve fork. Now I am not going to sit here and tell you that slapping on a set of WP Pro Components is the answer to your front end problems, as I did have to go through several setting changes in order to get a feel that I personally liked. I thought why not walk you through some of the process to create settings as well as tell you about the latest one I have on our 2021 KTM 450 SX-F test machine. 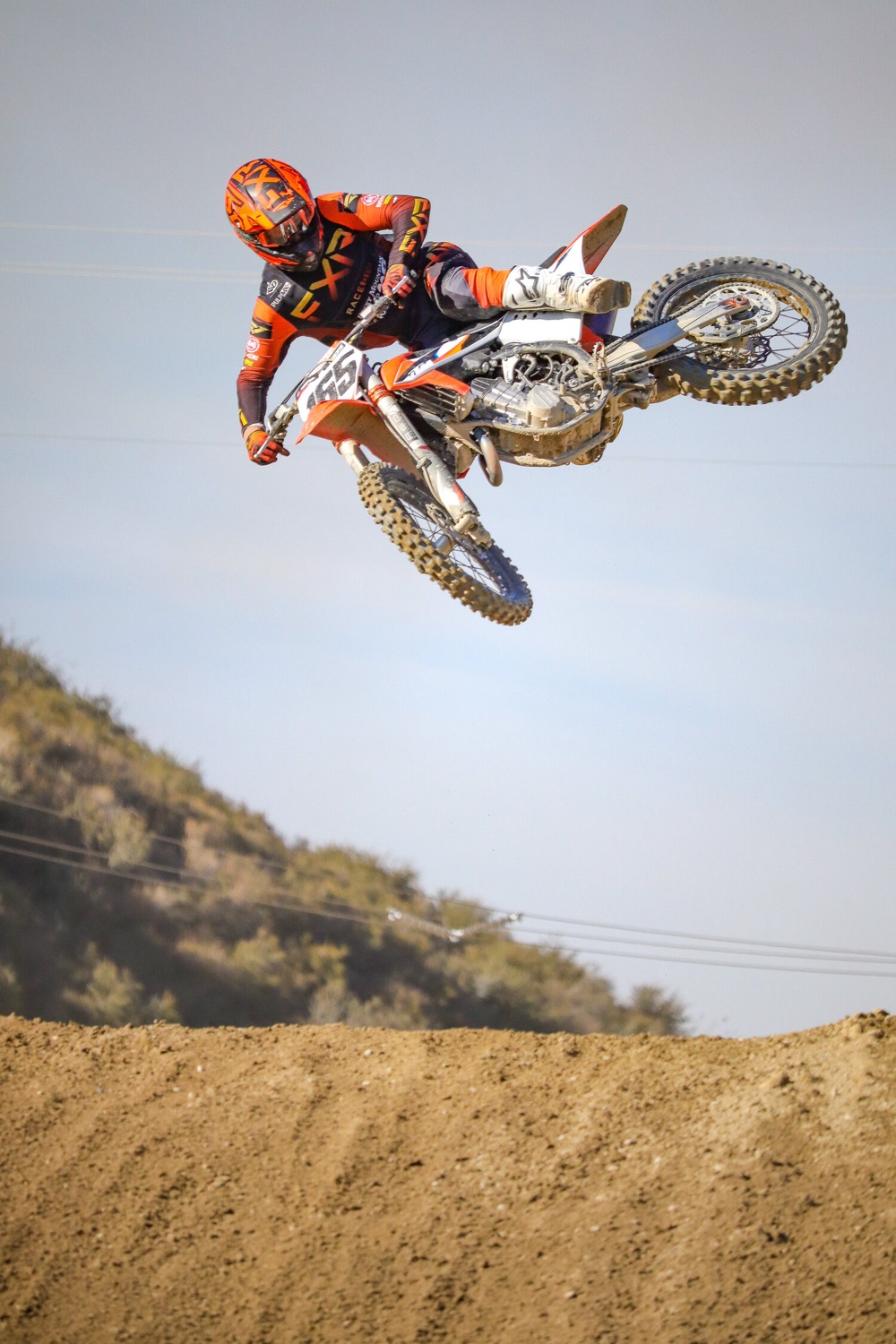 You know who helped me get to this blend of KTM comfort and performance promise land that I am in? Mark Johnson at REP Suspension. I am a serious pain in the ass when it comes to KTM suspension, probably because I love that damn Yamaha KYB/SSS fork so much (yes, I know there are KYB conversions and we are going to test one soon, don’t yell at me). Although Mark made my WP Pro Components better than my stock stuff the first time he did it, I felt like I wanted more comfort on rough tracks. I complained to Mark that my rear end always felt too low under acceleration and the front end still had a firm feel on slap down hits through my handlebars. I complained. He listened. That is what great suspension tuners do. They listen to the customer. There are several companies like this out there and REP is one of those companies. Mark emailed me one night about a setting he came up with, that he thought I might rather enjoy. I honestly thought what I had was decent, but as one old test rider once told me, “you’re only as good as what you try right” and I am in the business to try and relay that back to you all right? So I immediately got excited about another suspension test that could really be “THE ONE”!

I met Mark at GH one Thursday and we literally stayed there all day. This is nothing new, but as a guy who has been doing this 20 or so years, I still love it! I wanted to make sure that I left GH near dark and when the sun decided to set behind the hills of Glen Helen, I wanted to make sure that I had comfort along with performance, before I gathered my things and left. This is the only way I can sit here and type to you all and say if it’s better or not. When you move from a stock WP AER fork to a WP Pro Component set up you will immediately feel a heavier turn in, yet will receive more front end traction. It’s a give and take and I will gladly take a heavier steer in (area 1 of the corner) for added traction. I don’t have near as much of a problem with the rear of the bike, but the stock shock, once hot, fades away into oblivion and gives no real damping character at the end of a longer/rough Moto. I wanted consistency, comfort and traction. Is that so much to ask from a bike? The Kawasaki gives it to me. The Yamaha gives it to me. I want the KTM to give to me as well with WP components on it!

As usual I make sure that each test is a blind test. I make damn sure I know nothing about what Mark and the REP crew do to each setting and that I am going strictly off of feel when riding. I make sure I hit the same lines on the track through out the day for consistency and that ensures proper feedback to the REP crew (as well as you the reader). When all was said and done, what REP gave me was the best setting I have ever felt from any KTM set of suspension I have tried. Oh and I have tried a lot. Is it the best suspension that I have ever met period? No, but it was the best KTM stuff I have tried, hands down. I was starting to consider that the WP Pro Components were just built for performance and not comfort, but Mark and the guys proved to me otherwise.

The WP fork with the REP setting not only had hold up, but had comfort as well. Most of the time when you go to an A-Kit style fork, you will lose comfort and gain performance, but both of those categories went up equally for me. RARE! This has only happened twice in my time of testing! Using a 4.8 N/mm spring rate along with the parts listed below gave me great lean angle traction (off or on throttle). The downside to my previous CV fork setting was that if I loaded the front tire on lean (under throttle) the fork deflected and felt harsh. The new updated setting felt more supple initially and progressively had more damping feel as the fork went down. There was no unexpected stiff shelfs in the travel as the fork moved and in return, that gives the rider better feel to the front wheel/tire. AKA more tire contact patch! Boom! Gone is the harsh slap down feel to my hands and that increased my ability to be more confident in how hard I can push into/through jumps because I know that if I wanted to overjump a section (on purpose or maybe by mistake) I could do it without an issue.

The WP Pro Component shock has always been a struggle for me to set up. I always felt like my rear end was too low and when I managed to get the rear end up, it was god awful coming out of corners (harsh and wasn’t fun on my back). Although I gained consistent damping feel over a longer Moto with the Pro Component shock the comfort was difficult to find at times. To help this I ran REP’s knuckle without the longer rods, along with a sag setting of 98mm. I wanted to change the curve of the linkage ratio to help acceleration comfort, but try to keep that rear end up under throttle. This did get me slightly more comfort, but felt like it pushed on the front end too much once transitioning off the throttle. Mark suggested that I try a 1mm longer shock shaft and that really changed the character of this bike. Once I had the chance to ride with that, it altered my outlook on how the KTM’s ride attitude could handle rougher style tracks. The rear end stayed up higher in the stroke and for my 5’11 front end steering frame, this was a game changer. The KTM became more balanced on throttle and allowed me to accelerate harder/sooner out of choppy corners. I now could get my sag numbers back to normal range (103-105mm), which left me with a balanced feeling coming into corners (off throttle). Having this 1mm longer shock shaft also allowed me to run REP’s longer pull rods, which increased rear wheel traction and took some bite/harshness out of any initial braking bump hit.

Now on to the question that I will get asked after this is published… Keefer, I just spent 11K on my KTM and now you are saying to purchase 5K on suspension  as well as put another 800.00 into those Pro Components? Holy shit! Yeah, I know, right? However, it’s crazy how many people actually do this. So to cater to those people as well as to others, I will also be doing a stock re-valve story just like this one coming in the next few weeks. So hold tight! Not everyone has the money for Pro Components and I am not blind to that fact. I really wanted to get this article up because I had my doubts about these WP Pro Components at times and get tons of emails about them. Mark and the REP crew worked their asses off to make me happy and it took me a while to get there, but hopefully with all of my testing that I have done, as well as REP’s work, you all will benefit from a one and done setting!

Below are the parts that REP incorporated into my WP Pro Components and what each part’s purpose really is:

Gives more bottoming resistance/progression allowing for a softer more plush setting to be utilized for better top of the stroke feel without losing bottoming. (The concept comes from KYB which I have played with a lot).

Allows us to valve the flow of the needle and is fully tunable to each rider. Riders typically comment less front dip/more controlled front under braking.

WP only makes 3 degree options 15, 11 and 8. Mark makes 13 as well for MX/Off-Road and 8 for SX. This helps bridge the gap between the degrees to get a specific damping the rider is looking for.

Lower cartridge friction compared to the standard o-rings that come in the fork.

Similar to the fork LSV, it gives REP another shim stack to play with, that normally is not in the shock. The shim stack controls the needle flow and is fully tunable. (This is the part that I felt gave firmness without taking away comfort). It also majorly decreases hysteresis, or pressure differentials, in the shock, which results in a more consistent feel and performance in the shock.

Springs naturally want to turn as they are compressed which causes binding. The bearing is fitted on top of the spring to allow it to turn and can be put on without the damper being disassembled.

REP has spacers made that go on both sides of the shim stack that are surfaced ground to be more flat than production. The spacer makes for a more consistent and predictable build as far as dyno and rider feel is concerned.

Helps balance of the bike for most riders, but also gains comfort as it puts the linkage into a softer part of the stroke.

Price jumped from up from the last write up I did because they now build them with OEM Bearings and seals.

It’s longer compared to the standard 148.2mm for the flatter leverage curve Mark was looking for, also built with OEM bearings and seals.