The 2021 Kawasaki KX450 is one of the most stable machines in its class and the Showa suspension has a lot to do with that, but it’s slightly under sprung for most heavier or aggressive riders. Even when you go up in spring rate it only acts like a band aid in the long run. I have lived with and have been decently happy with just a spring rate change, but I needed to see if a valving change along with a spring rate change would help the KX450’s character even more on the track. I dropped off my Showa bump sticks to the guys at Race Tech and this is what I came away with after riding with the re-valved Showa set up on the green machine. 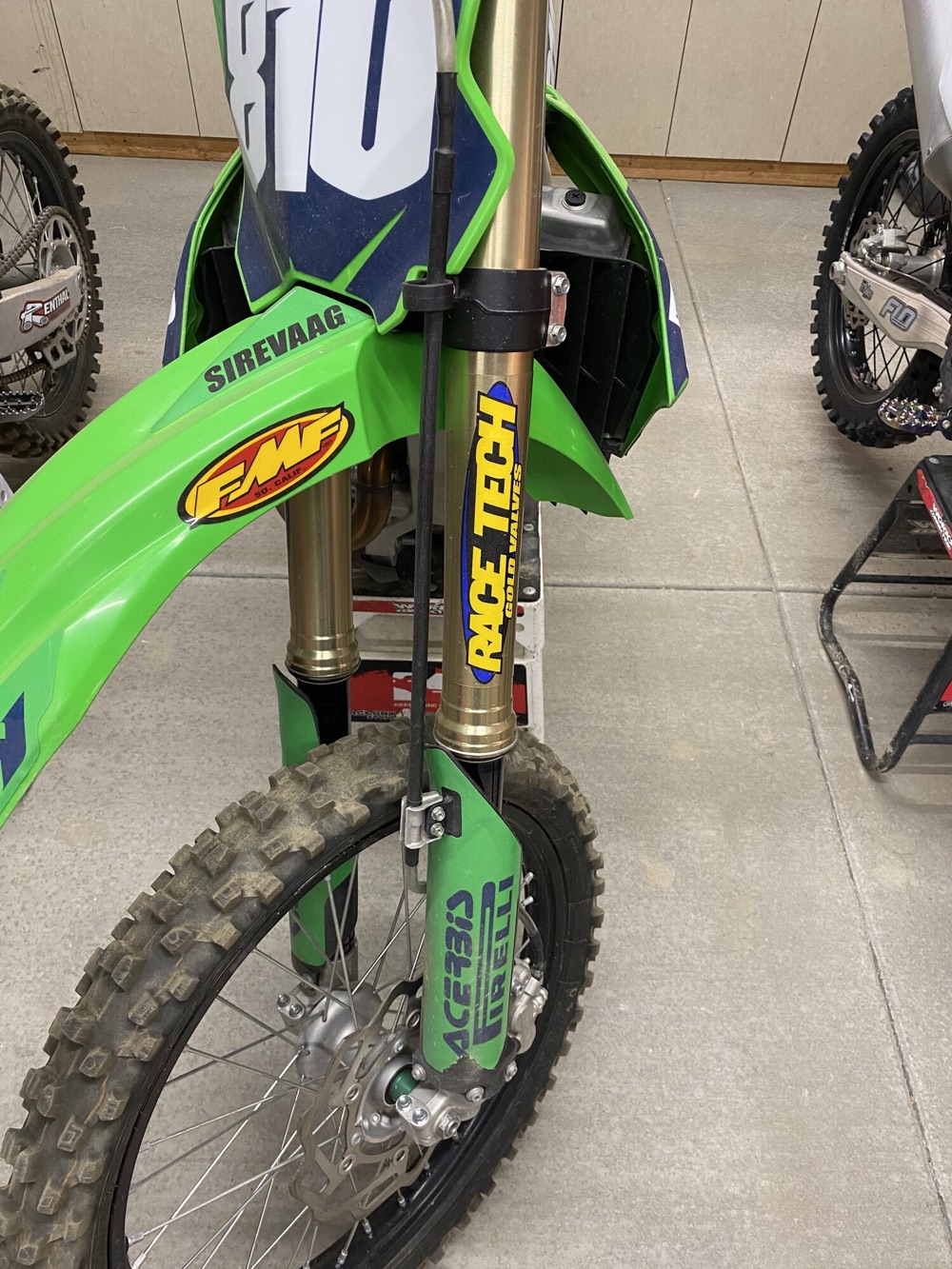 With the stock fork, I had too much diving on de-cel and when I went to a stiffer spring it helped with this problem, but I lost some of that nice comfort that the stock spring gave me. Race Tech installed their Gold Valve compression/rebound system with a 5.4 kg spring rate and it changed the way the bike felt in every off throttle situation. I now had better hold up on de-cel with increased bump absorption that didn’t feel harsh in my hands, like the stock valving with the optional 51 N/m spring rate. The KX450 now had a better lean in feel on area 1 (entrance) of corners that gave me more front end traction. I ran the fork height at 3mm at most tracks which gave me the balance of predictable straight line stability and easier cornering than the stock setting (with heavier fork spring). On rougher tracks like Glen Helen, I did have to back out the compression a couple clicks in order to get a little softer mid stroke feel with the Race Tech setting. Unlike the stock valving, the Race Tech Showa valved fork has a larger window of adjustment that could make me happier with minute clicker adjustments. I have always had a problem with the KX450 feeling long, which would hurt my cornering, but with the valving/spring rate change that Race Tech made, actually helped make the KX chassis feel better through corners. I need a balance of stability and ease of cornering with any machine I ride and although I prefer a slower turning chassis, the KX has always felt too lethargic/long in corners. This fork change has helped me corner the green machine better.

I honestly never really had that much of an issue with the rear of the Kawasaki as the Showa shock had a blend of comfort and performance that gives the KX great rear wheel traction. Sometimes I get nervous about sending a a good standard shock setting off to a aftermarket suspension company, so to say I wasn’t a little skeptical that Race Tech could improve upon the stock shock would be a lie. I will say that going to their suggested 5.8 kg spring rate had me a little worried, but after a few laps I could see what Race Tech was after. Going to a slightly stiffer spring rate in the rear along with their Gold Valve system kept the KX450’s rear wheel traction, but now offered a flatter on/off throttle ride. I ran the sag at 103mm and the rear end felt low enough in braking bumps where it didn’t give me that “rear end kick”, that the stock shock sometimes had on bigger braking bumps. I did end up going a little stiffer on high speed and that helped keep the rear end up a little on steep jump faces. With the Race Tech re-valved shock I used the stock linkage ratio (unlike with the stock suspension where I ran a PC link) with better results under acceleration. The RT re-valve gave me more control on the initial part of the shock’s stroke, yet didn’t get too low under acceleration out of choppy ruts. It still might be a tad soft on g outs or flat landings so I may get Race Tech to create a second shock setting for me with a little more low speed compression.

Race Tech knows how I like my bikes set up. This is the most important aspect when thinking about having an aftermarket company re-valve your suspension. Give them enough information on how you ride the bike as well as how aggressive you are and if you are a rear/front end steering rider. The more info about yourself you can give them the better the chance your first setting will be close enough to wear you can fine tune it once you get it back with just clickers. Race Tech did a great job on improving upon the stock suspension and proved to me that I was being nervous for no reason. Suspension settings are a personal preference as well as a feeling that can be hard to translate to others if you’re not used to correlating what you feel on the track to the suspension tuner. Listen to the Rocky Mountain ATV/MC Keefer Tested Podcast episode 229. Listening to that particular episode can give you enough info to arm yourself with enough knowledge to give Race Tech or any other suspension company the correct info about yourself and what you want when out on the track.

If you have any questions about the KX450 or suspension my door is open to all my readers/listeners. We built this media testing outlet for you the consumer! Email me at kris@keeferinctesting.com if you need me.