Some muffler questions that get sent to my email inbox usually look like, “which muffler is best for my bike? “Is a full system worth the money or can I just get away with purchasing a slip on”? “Is my stock muffler the best muffler option for me”? Instead of trying to keep answering some of these emails, I thought I would write an article on some of the current 2021 motocross machines and which mufflers do what to the power curve as well as if they are better than stock. Now I haven’t tried every aftermarket muffler out there, but if you’re in the market for one and need to decide on if your bike works best with slip on or full system, you have come to the right place. I have also put together a sidebar on if the stock muffler is worth a crap or maybe you should just save your money because the OEM muffler is a good stock system. Just because it is “stock” doesn’t mean it hasn’t been fully developed by the manufactures. Not all stock mufflers are created equal, so read below and see if you need to keep your stock muffler on your Honda CRF250/450R, get a slip on, or maybe go all out and purchase a full aftermarket muffler system. 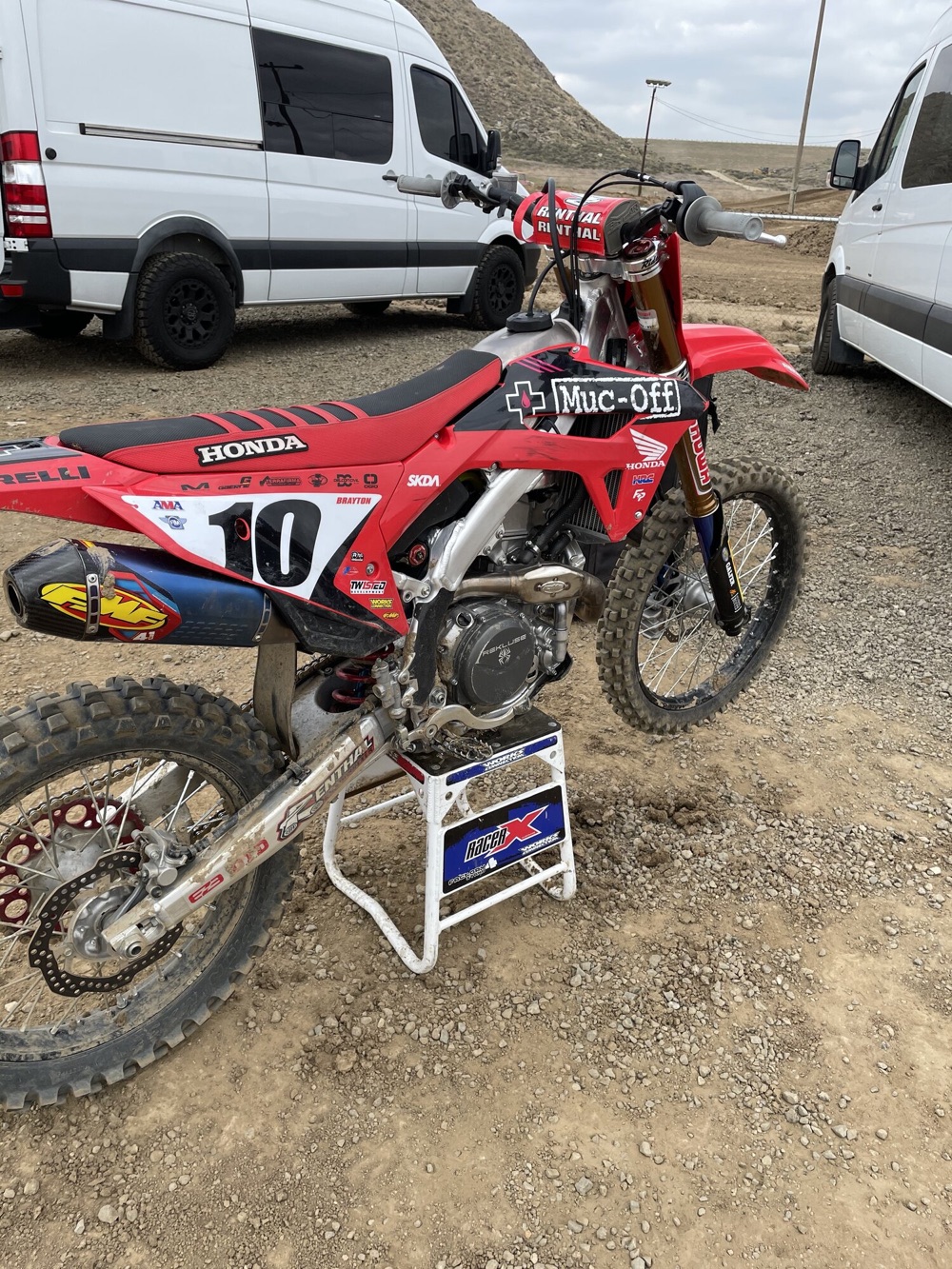 FMF Summary: Better roll on delivery with a snappier throttle response which can help let the CRF450R roll third gear more through corners. You would think this might be contradictory to what you want out of this machine but this allows to run a higher gear which calms the chassis down. Mid range has a smooth/meaty pull but signs off earlier on top end than the stock system.

PC Summary: Long linear power character with no real explosive snap down low like the stock system. The PC system calms the Honda’s chassis down under acceleration and adds more mid range, with slightly more top end pulling power. Over-rev is as good as stock.

Yosh Summary: Retains more of that smoother roll on power, similar to the full system and keeps the longer than stock mid range power, but to me the rpm response suffered a little on low to mid range areas of the track. I wanted just a little more of that stock muffler excitement in these areas.

FMF Summary: Throttle response isn’t as good as full FMF system and the Honda will not pull third gear as good out of corners with slip on, but

Slip On Or Full System?`: The stock muffler is just to touchy down low and that can lead to a lot of mistakes when trying to roll your corners or when you get tired. To me an aftermarket slip on, not a full system is the most bang for the buck on the CRF450R. I prefer the FMF slip on because if it has a snappier rpm response yet a smoother roll on mid range character than stock and this seemed to help the Honda’s chassis the most. The Yosh is also a great choice but maybe slightly too lethargic for my taste on low to mid range rpm response, but I do think t his is a great choice if you’re looking to lighten up your machine as well as tame it down some.

PC Summary: Better low end rpm response than stock but with a smoother pulling power out of corners. Mid range pull is longer and allows rider to get into third gear sooner than stock without abusing clutch.

Yosh Summary: Better low end feeling out of corners than the full Yosh system, but still not as much bottom end than the stock system. Mid range pulling power feels as good as full system but with less top end/over-rev.

Stock Muffler Character: Smooth roll on delivery with crisp low to mid rpm response. This machine could use more low to mid range torque feel in order to get rider out of soft low speed areas of the track better.

Slip On Or Full System?: The CRF250R needs more bottom to mid range pull so I have found going to a full system benefits this machine the most. The FMF or PC both have unique characters that I need in order to shift sooner and pull out of corners with more authority. The FMF is a louder muffler system than the PC so if louder mufflers are not your thing you might want to go to the PC system for a deeper/less raspy sound. If you put inserts into the mufflers of the FMF, it kills some of its best benefits (less rpm response/low end feel).