The KTM, Gas Gas, and Husqvarna umbrella was divided up by brand to target different types of consumers.  KTM being the high end, ready to race model, Gas Gas being the affordable yet sufficient to go racing on model, and the Husqvarna being the mellower vet friendly all-around type of bike.

So, when Kris gave me the Husqvarna 2021FC450, my goal was to see if I could improve on it.  My initial step was to ride the bike and shake it down in stock form, which I wrote about in a previous article. Next up was to improve upon the stocker based on what I found on the initial rides.  As far as power, this is still a 450 and has plenty of motor, it’s just a question of where do you want the power and how do you go about moving it to suit you.  So, I didn’t want to make this my focus, I wanted to work on the chassis and suspension. 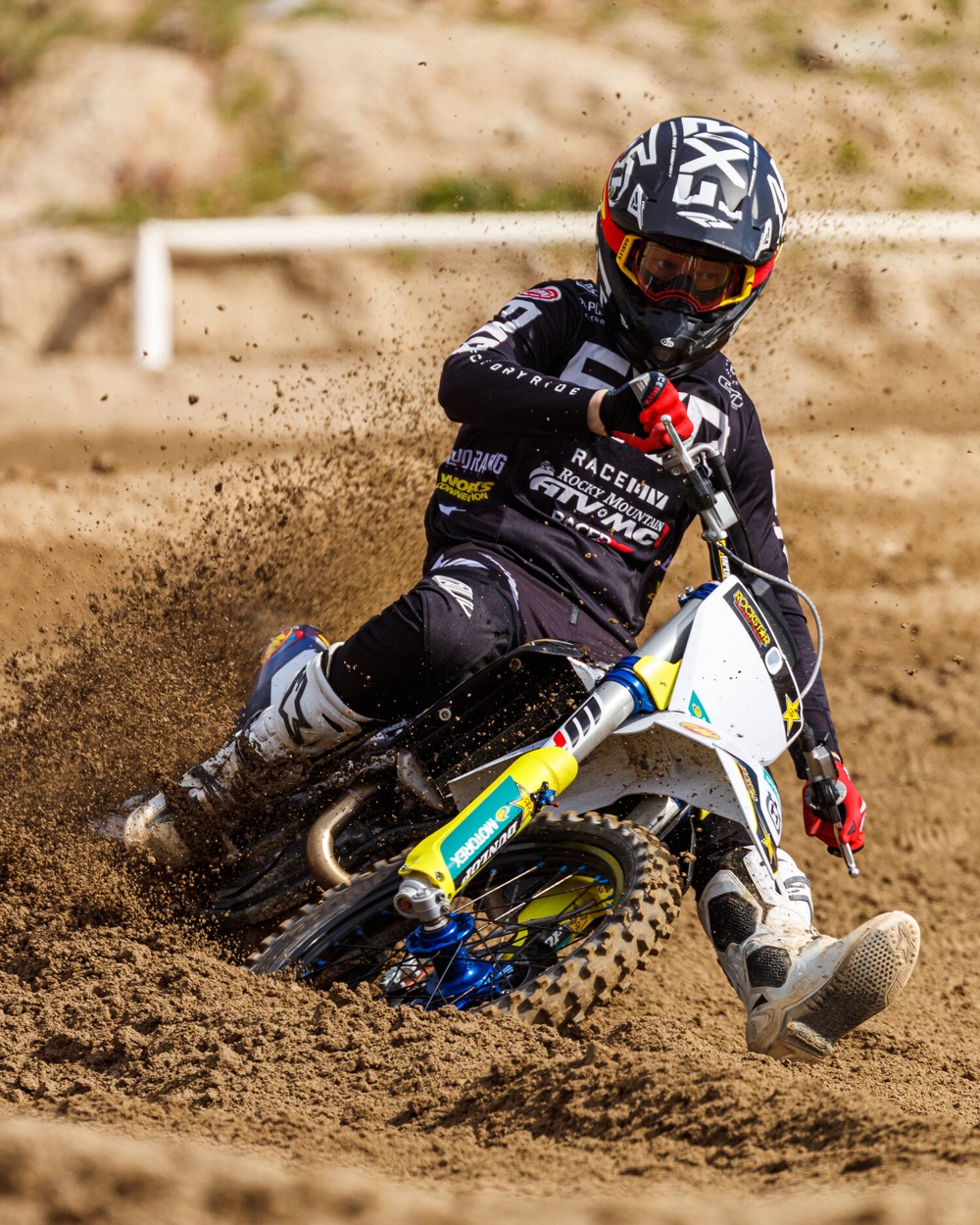 For 2021 Husqvarna decided to set up the chassis and suspension of the FC450 to fit the smaller/vet rider/off-road and trail rider. They did this by installing 10mm shorter forks, configuring the linkage to drop the rear of the bike 10mm and as a result of lowering the rear, they also had to limit the depth of the shock stroke to prevent the tire from hitting the back of the air box. With the bike set up this way, the on-track feel was for me, a bit harsh on the choppy bumps. The rear end felt as if it were on a different/lower level than the front of the bike and the overall chassis feel was really stiff. One area that was a positive for me was the lower front end gave me the ability to turn down earlier in corners and hug the inside lines. Once I had this info, I went to Luke and the guys in the suspension department at Pro Circuit to see what we could come up with. I wanted to keep the 10mm lower forks, but I did want to raise the rear end to get more of a balanced feel. When Luke called and said everything was ready, I picked up the stock suspension, sprung and re-valved for my weight/riding ability, and a different linkage consisting of a different rod length and knuckle to try and accomplish what I wanted. I bolted it up to the bike and went and tested it at three different tracks – Fox Raceway, State Fair MX, and Glen Helen.

When riding the bike, I immediately noticed the balanced feel due to the new linkage.  I no longer had the two separate level feeling (or unbalanced feel) that I did with the stock linkage. Along with the re-valved and a spring change to the shock, I instantly had a better feel for where my rear tire was placed, significantly better bump absorption, and a more planted, stable feel on corner entry. I didn’t have any issues with the bike in stock form with jump takeoff or landings, but these areas were slightly improved with the correct spring and valving tailored to me.

Like I mentioned before in stock form, the forks had a harsh, unstable feeling. I wasn’t sure if this could be improved with different triple clamps or just a re-valved AER fork. So, I decided to try the Pro Circuit re-valved fork and keep the stock clamps. The fork performed slightly better than stock on jump take offs and landings, but the areas where I noticed the biggest improvements were front end traction/feel and I got that initial plushness back on small chop that the stock forks didn’t have. This gave the bike an overall more compliant confidence inspiring feel when the track got rough late in the day. Another area that I didn’t anticipate improving on was the ability to turn down even tighter and stick to the inside line with the same speed as a wider line. I believe this was better because the forks had better holdup and it allowed me to push the bike into and around corners at a higher speed without dive.

So at the end of the day, this Pro Circuit suspension mod helped me achieve the areas the FC450 needed to be better in, as well as help me have a better level of comfort while trying to push this older moto body back into shape. I still would like to try a different triple clamp set up and possibly different engine hangers to see if I could improve even further on the harsh chassis feeling that I get at some tracks.  All in all, big improvements with some pretty basic changes that make a good bike even better.  If you are looking to getting these same improvements, call PC at 951-738-8050.  Mention this article and they will get you set up and maybe possibly a discount.