We decided to try three brands of pump replacement type fuels to see how they stack up against pump fuel and one another. Below is a detailed breakdown of each fuel as well as what I am currently pouring into my test bikes. 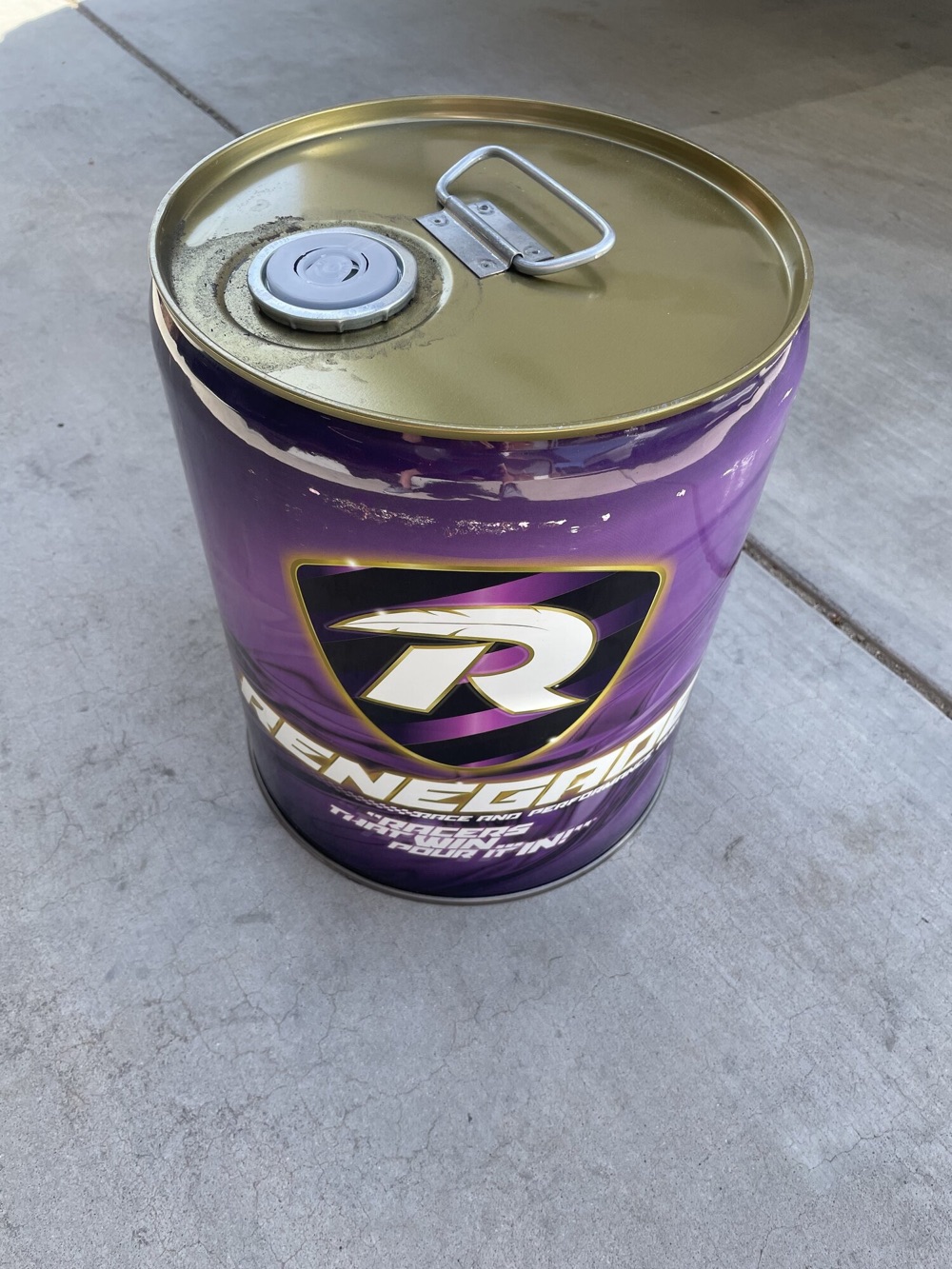 Renegade may not be as much of a household racing fuel name with normal blue collar folk as VP Racing. With that being said, I think some of this is because it’s tougher to find Renegade fuels than VP and lets face it, VP has some pretty damn good fuel. However, Renegade offers several different kinds of fuel for the two wheeled enthusiast at a competitive price as well. I wanted to try a pump replacement fuel, similar to VP’s T4, so I asked a Renegade dealer Stan Benson Racing (located in up in Northern California) to supply me with a pale of MX4 (we also will be reviewing Renegade’s SX4+ in a future article). This high-performance four-stroke-specific fuel has many of the same technologies as Renegade’s popular SX4+ fuel and is also used by many top AMA Supercross teams. In most cases, MX4 is said to not require jetting or fuel mapping changes when transitioning from pump fuel applications. Renegade’s in house testing has shown up to 4-5% gains in power over popular comparable fuels on the market and their exclusive additive package is said to inhibit dreaded gumming and performance-robbing deposits. Much better than our crappy California blend fuel!

The biggest advantage of MX4 over pump gas is that our current California crappy pump gas contains ethanol, an alcohol-based alternative fuel manufactured by fermenting and distilling starch crops that have been converted to simple sugars. This is not good for the lifespan of valve trains, fuel pumps, and top end gaskets on small engines like those found in dirt bikes. Ethanol in the fuel can leave a gummy substance that clogs fuel pumps (or jets on carbureted bikes) and causes early deterioration of head gaskets and o-rings, shortening the life of your engine. Another major problem is phase separation; if water gets into the fuel, this can cause the water/ethanol mixture to sink to the bottom of the tank where the fuel pickup is. Water inside your engine can cause the fuel pump to stop working and also can make your bike miss and sputter.

Is the on-track performance gain from MX4 worth the added cost from pump? For the average guy screwing around on open land, maybe not so much. For the true enthusiast who rides/races hard and wants a reliable power gain? Yes, it is, at least to me. Renegade’s MX4 comes in an easy-to-pour 5-gallon pail or a 55-gallon drum. I ran a pale of MX4 through a KTM 450 SX-F, YZ450F and CRF250R and it took me less than two laps to feel the added throttle response compared to pump fuel. When I came out of corners, while rolling the throttle on in second gear, each machine had more pull down low as well as throttle response with the MX4. In third gear, I felt a better pull and each machine ran crisper/cleaner throughout the rpm range. I didn’t feel too much gain through the top-end as most of what I felt was down low and up through the midrange. An added benefit was that the bike was easier to start (this especially is great because the YZ450F was the hardest to start out of all the machines I tested the fuel with). Riding longer motos on a sandier-type track, I also noticed that the bike kept consistent power. Usually when I test at this type of track, the power falls off a little as the bike gets hot with pump fuel—but not so with MX4. I also liked that I didn’t have to change my ECU mapping in either a stock ECU’s or a previously mapped Vortex ECU.
Compared to VP’s T4 I feel like both are similar in performance on the track except for one area. Renegade’s MX4 does give a better low end rpm response and pulling power down low feels slightly better. Renegade has a slightly cleaner feel on low rpm, but I wouldn’t know that everyone would be able to feel the difference when going back to back with each fuel.

For $94.00 for a five gallon pale of MX4, it is a little more expensive than that of T4, but there is a small performance advantage. Is it worth it? That will have to be left up to you, but it’s nice to know that the consumer has another option when it comes to pump replacement race fuel. Check out renegaderacefuel.com .

Designed for stock or slightly modified four-stroke motorcycles and other off-road vehicles used in competition, unleaded/oxygenated and ethanol-free T4 is a direct pour-in replacement for premium pump gas. Since pump gas has a short storage life and could cause greater need for repairs in the motorcycle industry due to its ethanol content, T4 100 octane rating (R+M/2) provides greater protection against detonation. Compared with more expensive performance parts that increase power along only a small slice of the power curve, T4 claims to add 2-3 percent more power and better throttle response across the entire rpm range. I wanted to see if that “claim” was true and have been running it in several test bikes I have here.

The biggest advantage of VP T4 over pump gas is our current pump gas (especially California pump fuel) contains ethanol, an alcohol-based alternative fuel manufactured by fermenting and distilling starch crops that have been converted to simple sugars. This is not good on the life span of the valve train, fuel pumps, and top end gaskets on small engines like a dirt bike. Ethanol in the fuel can leave a gummy substance that clogs fuel pumps (or jets on carbureted bikes) and causes early deterioration to head gaskets and O-rings and possibly shortening the life of your engine. Another major problem is phase separation; if water gets into the fuel this can cause the water/ethanol mixture to sink to the bottom of the tank where the fuel pick up is. Here’s a tip: If you are using pump fuel and you’re at a gas station and see a fuel truck filling the gas station’s tanks, go somewhere else, because chances are they are near the bottom of the reservoir. Water inside your engine can cause the fuel pump to stop working (seize up) and also can make your bike miss and sputter.

Is their a on-track performance gain from T4 compared to pump fuel? For the average guy putting around on weekends, maybe not so much. Pump fuel is just fine. For the true enthusiast who rides hard and wants a reliable power gain, yes, it is. I ran five gallons of T4 in the Yamaha YZ450F and it took me less than three laps to feel the added throttle response (compared to pump fuel). Coming out of corners and rolling the throttle on in second gear I felt like the bike had more pulling power down low. Shifting in third gear I felt a better pull and the Yamaha actually ran slightly cleaner throughout the rpm range. I didn’t feel too much gain through the top end as most of what I felt was down on low rpm and up through the mid range. However, riding longer motos on a sandier-type track I noticed that the bike kept consistent power. Usually when I ride this type of track with this bike the power decreases a little as the bike gets very hot – but not so with the T4. If you’re looking for a little more bottom end snap/pulling power, VP’s T4 is the real deal. If you’re in the market for a lower cost race fuel (versus some of VP’s higher-end products) that gives you some power gains and helps your bike just run better, then for around $85.00, a 5 gallon pale of T4 is a good choice. You can go to vpracingfuels.com to check out what other options VP has.

F&L has been around for several years in the off-road world, but you just don’t see it a ton around the motocross tracks. That has changed because F&L has introduced several new motorcycle specific fuels and the Pure 93 is an ethanol free pump replacement unleaded racing fuel.

Formulated as a direct pour in replacement for premium pump gas, Pure 93 uses the same high end chemicals to be refined as a racing fuel which can mean better performance and a cleaner, more complete burn in the combustion chamber.

Pump gas has a shorter shelf life and contains ethanol, which will eventually gum up fuel system components such as carburetors, injectors, pressure regulators, etc. Pure 93 is ethanol free and has a shelf life of up to 24 months.

Applications that Pure 93 is good for are motorcycles, marine engines, agriculture equipment, generators, lawn equipment. Basically any engine where you would want to have a better performing fuel with a longer storage life than pump gas.

From what I noticed when running the Pure 93 F&L fuel in my KTM 450 SX-F test bike is that you will not necessarily feel more low end pulling power or rpm response like you do when using VP or Renegade, but you will feel a cleaner burn. With pump fuel, I can feel some dirtiness associated with the ethanol we have here in California and that can make your throttle hand feel disconnected with your rear wheel. Unlike the other two brands, F&L is going for a lower cost with a cleaner burn in mind. This cleaner burn is better for the life of your motorcycle as well as not has heavy on your pocketbook ($45.00 for 5 gallons) when purchasing 5 gallons. The Pure 93 is a true pump replacement fuel that you may not feel on the track, but could feel in your wallet over the lifespan of your machine. Pure 93 is not on F&L’s website yet, but it is available. Visit racefuel.com to see where your local F&L dealers are or simply email info@racefuel.com.

So What Should You Use?:

I am not the type of media outlet to push something down your throats and tell you this is what you absolutely have to use. I will say that if you’re a weekend warrior looking to spend as little as possible and get more life out of your engine, the Pure 93 is a good choice as it is almost half as expensive as the Renegade MX4 or VP T4.  Just know that raw performance advantages are not super noticeable on the track like the others.

If you’re racing on the weekends and want more power, then to me, the Renegade MX4 as well as VP T4 is hard to beat. I have ran both fuels in the same machine, with the same ECU map, with great results. I will say I do get more low end RPM response and slightly more pulling power out of corners with Renegade MX4, but it’s a very minute difference. It would be difficult for me to tell you which one is best for you as I see positives in both Renegade and VP. I will say that my son and I split fuels between our machines, as he has been running Renegade in his 250 four stroke (for slightly snappier response) and I have been running VP T4 in a couple of my 450 test bikes here (for better rear wheel connection). My suggestion is if you’re looking to run better fuel than pump gas without performance advantages, but want cleaner burning fuel, go with F&L. If you’re looking to get all of that plus power advantages felt on the track, go with VP or Renegade. Just know that with performance advantages comes a heftier price tag.