On My Own Dime: Bell Sanction Kids Helmet

Becoming a dad has been the best thing that has happened in my life (besides marring my beautiful wife). On the third day home from the hospital, Oliver (my son) started his two wheeled journey through life, when I strapped him onto my chest and pedaled him around the neighborhood on my old BMX bike. Since that day, bikes/motorcycles have been literally an everyday part of his life and with that obviously comes the necessity for helmets. Alyse (my wife) is a trauma nurse at a level 1 unit and the Keefers refer to her as “a savage” (in a loving way). What is meant by savage is when it comes to having sympathy for cuts, bumps and bruises (or as Keefer says my sensitive emotions) she doesn’t bat an eye. She sees the worst of the worst, day in and day out at work and has no problem describing the gore, dismemberment, disgusting scents that can come from the human body and just overall debauchery of her type of work; all while delicately sipping on a cup of coffee. However, if she hears “mommy I have a boo boo” (which seems to act as a maternal dog whistle), she’s rushing full speed to rescue her delicate baby boy, full of sympathy, hugs, kisses, and is ready to mend anything from a splinter to a broken heart. In my wife’s line of work, she’s seen a fair amount of head injuries and hates seeing people having to suffer long lasting side effects of possibly preventable head injuries. We started drilling it into Oliver’s little head that if he’s on anything with wheels he must have a helmet on. Starting so young has really made it easy and now that he’s talking, he has become the “helmet police” making sure everyone in the vicinity has a well-protected cranium. 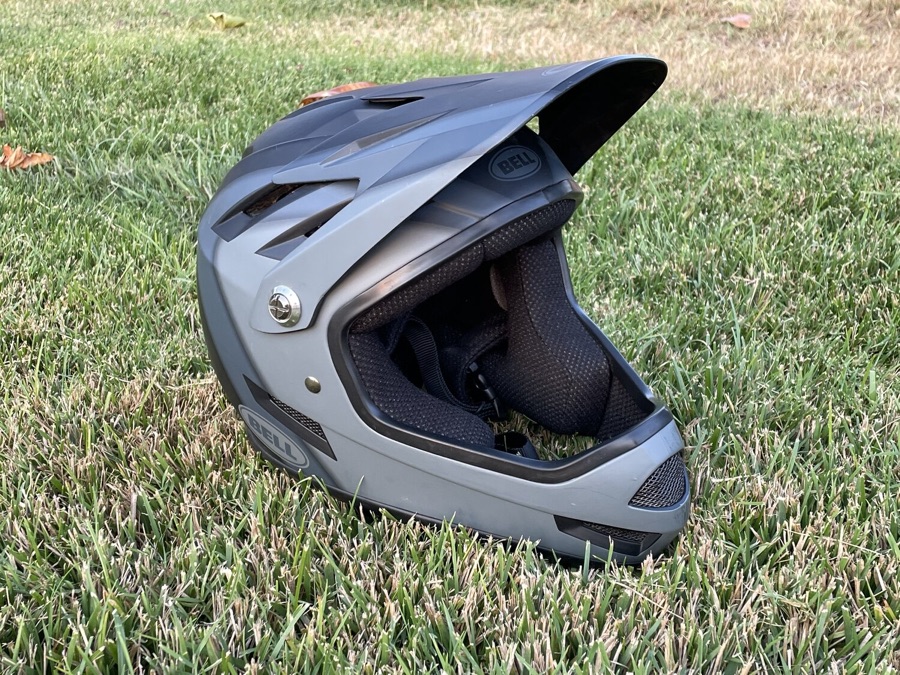 We started with just a generic Walmart infant helmet for when he would go on e-bike rides with Alyse and I. As kids do, he quickly grew out of his first helmet (both in size and protection) when he started showing interest in riding his three wheeled pre-strider bike. We got rid of the Walmart helmet and purchased an adjustable skateboard style helmet that had MIPS. This became his balance bike helmet as well as what I would use when I would ride him around on pit bikes or my dirt bike. Not to be “that bragging dad” but he started balancing himself and riding his balance bike with his feet up at 18 months after seeing an older kid riding one at Glen Helen. Roughly two weeks after mastering the balance part of riding, Oliver started wanting to go faster and faster as well as riding up and down curbs which of course evolved into skate park sessions when I’d get home from work. The incident that made us decide it was time for a full face helmet didn’t even involve anything with wheels. We were at the park and Oliver said he wanted to go down the slide by himself. About three seconds later I watched him come out of the slide tunnel head first, then scorpion into the bark and come up with a face full of bark, blood, and blubbery tears. We talked that night and could only imagine how bad his face would have looked if he fell off his bike, so after putting him to bed we started researching full face helmets.

Finding the right helmet proved to be more challenging than I thought because the selection is somewhat limited, there are different factors that needed to be taken into consideration, and pricing for kids helmets is all over the map. After about a week of doing research we decided on the Bell Sanction in an XS. There were other helmets out there that rated slightly higher on the safety scale, but we weren’t willing to pay $300-$500 on a helmet that he’s going to outgrow in six months. There were also helmets available that were in the $20-$60 range but they lacked the features and safety we desired. The Sanction isn’t directly marketed for toddlers, but the XS size 49-50cm is one of the smallest on the market, it weighs in at 850 grams (1.5 lbs.) and the fact that it can be purchased for anywhere between $90-110 made it a perfect candidate. It’s marketed for BMX dirt jumping, so its shell is small and it also has a pinch buckle for the chin strap like a bike helmet. The buckle was a huge help because anyone with a toddler knows how hard it is trying to get them to stand still long enough to buckle a traditional dirt bike helmet strap. The XS is a little on the tight side so when I put it on I pull the sides of the helmet out slightly to help them get over his dumbo ears. Once it’s past his ears, it fits nice and snug slightly pushing his cheeks together, but I’d rather have it snug than loose. The visor is adjustable and replaceable, which has come in handy on early morning or evening rides. Although I wish the Sanction had MIPS, I am confident that the US CPSC safety standard will be more than enough for his balance bike and low speed Stacyc adventures. The only other negative is that the pads/liner aren’t removable which would come in handy after a day in the saddle. While I am nitpicking, it would also be nice if the pads could be swapped out for larger ones as he grows, so that one shell would last a couple helmet sizes.  After four months of use he now asks for the full face helmet because he says “I want big helmet so I look like daddy”.

If your little one is starting to push the limits or just get a little sketchy on their bike I’d recommend taking a look at the Bell Sanction because it offers a good amount of protection without breaking the bank. Because let’s face it, you’ll be buying the next size up in the blink of an eye. It’s never too early to get your little one on two wheels, we have gone places and done things on our bikes that have made memories we (or I) will cherish forever. So get out there, dust off your old BMX bike and go make some memories with that little mini me who needs to burn off some energy and while you’re at it, give their head the protection it deserves. If you have any questions about the Bell Sanction, feel free to reach out to me at Michael@keeferinctesting.com.