Bolt It On Bike Rack

I just got a new Mercedes Sprinter van and I don’t know about you, but when I spend the kind of money I did with my new van, I want to make sure my bikes are secure and not going to fall over and ruin the sides of my new Sprinter. After I sold the ol’ trusty 2016 Sprinter, I purchased our new 2021 version and was looking for a bike rack to secure my test bikes. Some of you may be asking why not just build out the back of the van Kris? Well, it’s called money and I seemed to have spent a lot of it when I got the new van so I can’t exactly afford to build out a custom van right now. After doing some research, I wanted to try a different bike rack company than the previous one I used, so I decided on Bolt It On. Bolt It On is a family owned and USA operated business out of central California. After scouring their website and the tons of options they give you, I decided on the three dirt bike kit with 60 degree chocks with a 4 inch middle chock for my 170 sized van box. 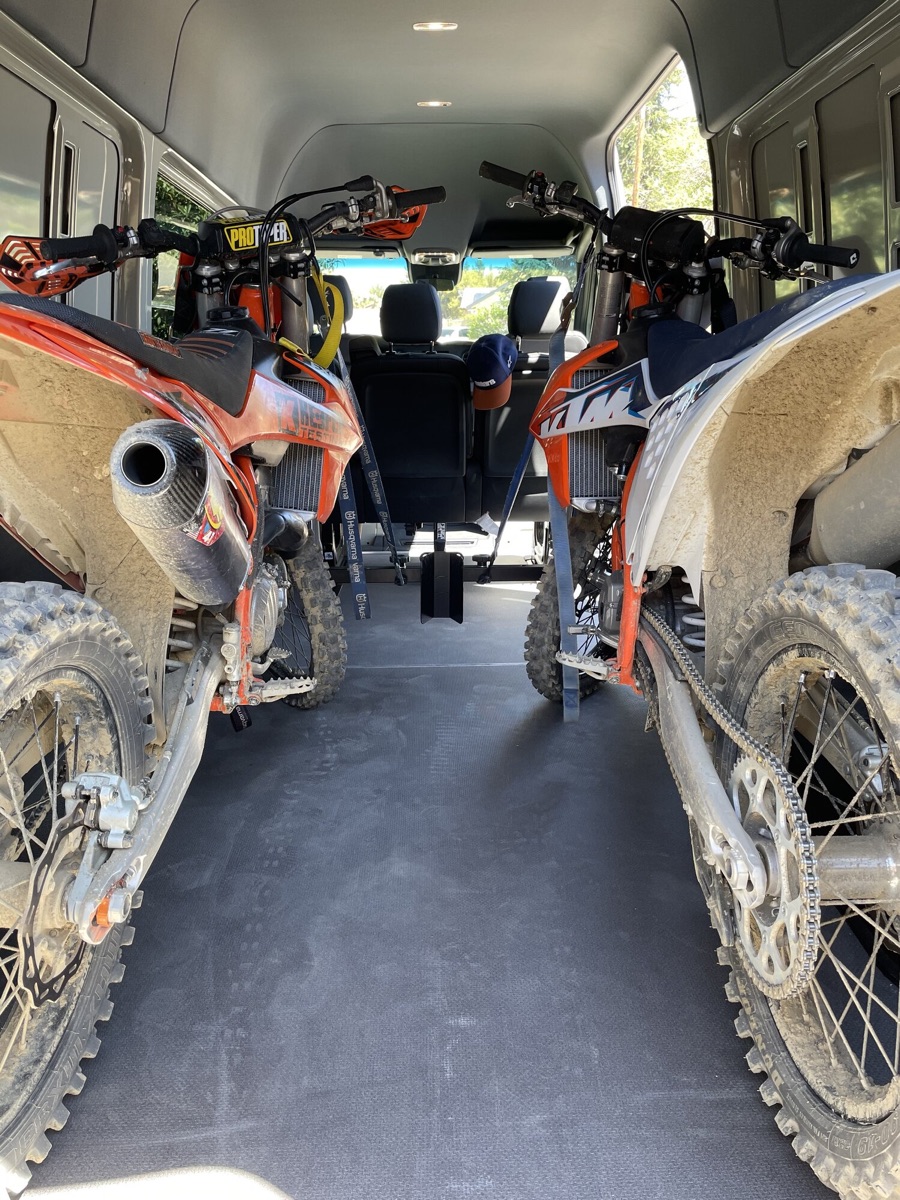 Installation literally took me 10 minutes and required zero tools. I began by locating the long square tube known as the crossbar. This is the body/base of your rack. I began by loading the chocks onto the crossbar, then installed each support leg as well as a tie down hook on the inside or outside of each support leg. Lastly, attach one j-hook on the left and one on the right of the corssbar. Each j-hook should line up through a hole positioned directly above each D-Ring. That is it! Boom! Done. No tools required! What’s even better is that the whole system feels and looks quality. No crappy welds or burrs, the cuts on the crossbar are clean and even the paint on the kit has a nice finish to it.

Initially I was going to install the Bolt It On rack to the D-Rings directly behind the bench seat but noticed that the crossbar stuck out over the side door step so we relegated the crossbar to the  set of D-Rings that are set back one row. After speaking with Scott (the owner of Bolt It On) he mentioned that they offer a shorter 144 box version of the crossbar that can be installed directly behind the seat, which will not affect the clearance of the step. So, if you’re in the market for a bike rack from Bolt It On, make sure you kind of know where you would like to install it before making your purchase. Loading bike into the chocks is easy and what I like most about having that 60 degree bend is that the bikes we load up will not sway back and forth when tied down. In my previous van I had another bike rack that had chocks that were straight and had some nightmare-is moments with the bars hitting the sides of my van when hitting bumps in the road (no matter how tight we got them). Adding a third bike through the middle was a breeze and even though we mounted the Bolt It On rack back a little inside the van, we still had enough room to throw in toolboxes, gear bags, gas cans, etc.

The benefit to this Bolt It On rack is that I can disassemble and reassemble in minutes if need be. I don’t have to drill into the frame of my rear bench seat and my bikes are more secure with the Bolt It On rack, with the 60 degree angle of the chocks! Bolt It On makes these bicycle and dirt bike racks for all different makes and model trucks/vans and if you want a custom crossbar size, Bolt It On can cut the bar to your specific size. You can visit them over at boltiton.com or call Scott at 805 975 8280. Prices range from $400-$500 for a complete 2-3 dirt bike kit.  If you have any questions about this test, please feel free to email me at kris@keeferinctesting.com.