When you purchase a 2021 KTM 250 SX-F TLD version the bike comes with a slip on Akrapovic Evolution muffler. However, I know that sometimes, certain machines react better to full systems rather than slip ons, we decided to get the full Evolution system to see how it changes the KTM 250 SX-F’s engine character.

The Akrapovic Evolution full muffler system has a similar character to the slip on version that comes with the Factory Edition, but with added bottom end roll on and mid range. If you’re expecting a ton of added RPM response (excitement) from your full system compared to your standard slip on, you will be disappointed. You simply will not be getting that much added rpm response with the Akrapovic full system. Instead of a smooth roll on that the TLD version comes with, it now has a little more pulling power in second and third gears and pulls those gears much longer. 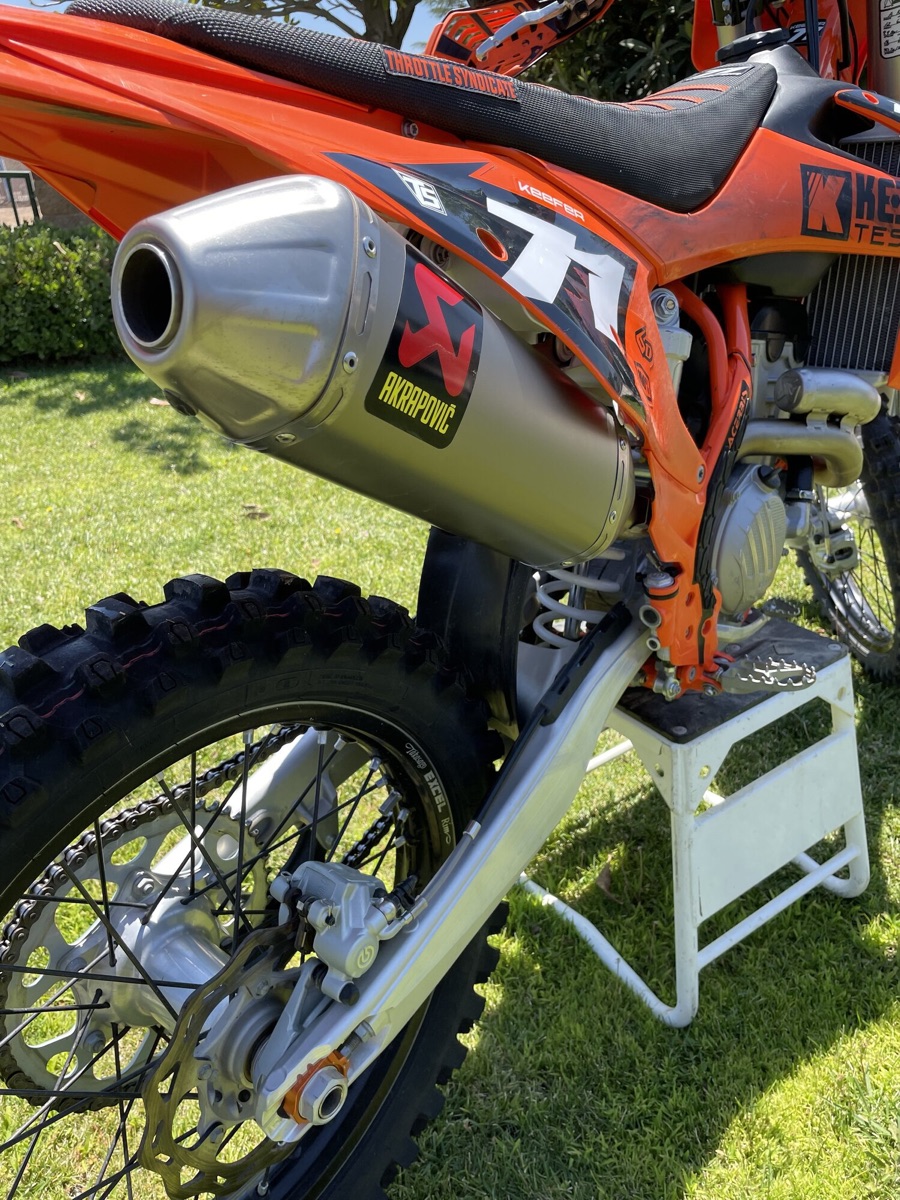 Mid range pulling power is increased, but the muffler pitch is so quiet that you never really feel like you’re “on the gas”. The mid range pull is much more linear and longer than the standard slip on or stock muffler and being able to shift a little earlier with the full system makes it easier to ride in softer conditions. I had a hard time with the KTM 250 SX-F at softer tracks not recovering, if I shifted early out of a corner. With the full system at the same track I was able to shift into third and not have to worry about covering the clutch as much. The full system just simply gives me more “meat” in the mid range.
Top end and over-rev is where this Akrapovic Evolution system shines. Adding top end and over-rev to the already very capable KTM 250 SX-F only makes this machine more fun to ride. Again, I can’t stress on how deceiving this system is because of it’s quiet nature. I really had to focus in and feel how quick I was going from point A to point B on the track because the pitch of the muffler never sounds “racey”. However even with its quiet note, the Akrapovic full system lets the KTM pull so much farther that it almost feels like I swapped to an aftermarket ECU. The connection to the rear wheel with the full system is unmatched and even though it may seem like it’s not very responsive, the KTM with the Akrapovic full system allows the rider to get on the gas sooner through corners.

If you’re reading this and wondering why you can’t simply purchase an Akrapovic headpipe for your Akrapovic slip on, the answer is they will not mate up. The Akrapovic slip on has a smaller diameter OD, (where it meets the stock headpipe), so purchasing just the headpipe will not work.

A couple of durability notes:

-The Akrapovic lettering on the headpiece resonance chamber will wear off after a few washes.

-The Akrapovic muffler stickers will burn away around the 7 hour mark.

-The overall quality of the system and the parts inside the muffler are second to none. The muffler packing lasts longer than other aftermarket systems and the hardware it comes with is superb.

-Is the system worth the $1200.00 price tag? Comparing it to other systems out there, I would say you’re getting what you’re paying for. A lighter, race oriented system that gives the rider better overall power throughout the rpm range.