The 2021 Kawasaki KX450X has been a bike I’ve been interested in putting some time on ever since Kawasaki decided to jump back into producing an off-road 450. I don’t care who you are, but there’s something nice about rolling up to the track or trails not having to worry about a stand. Unfortunately, Kawasaki missed big with their kickstand placement and as functional as it may be on the showroom it needs to come off ASAP if you’re planning to lean the bike over riding at all. After a few days of riding, I had a pretty good direction of a few things I wanted to try to improve on the KX450X. 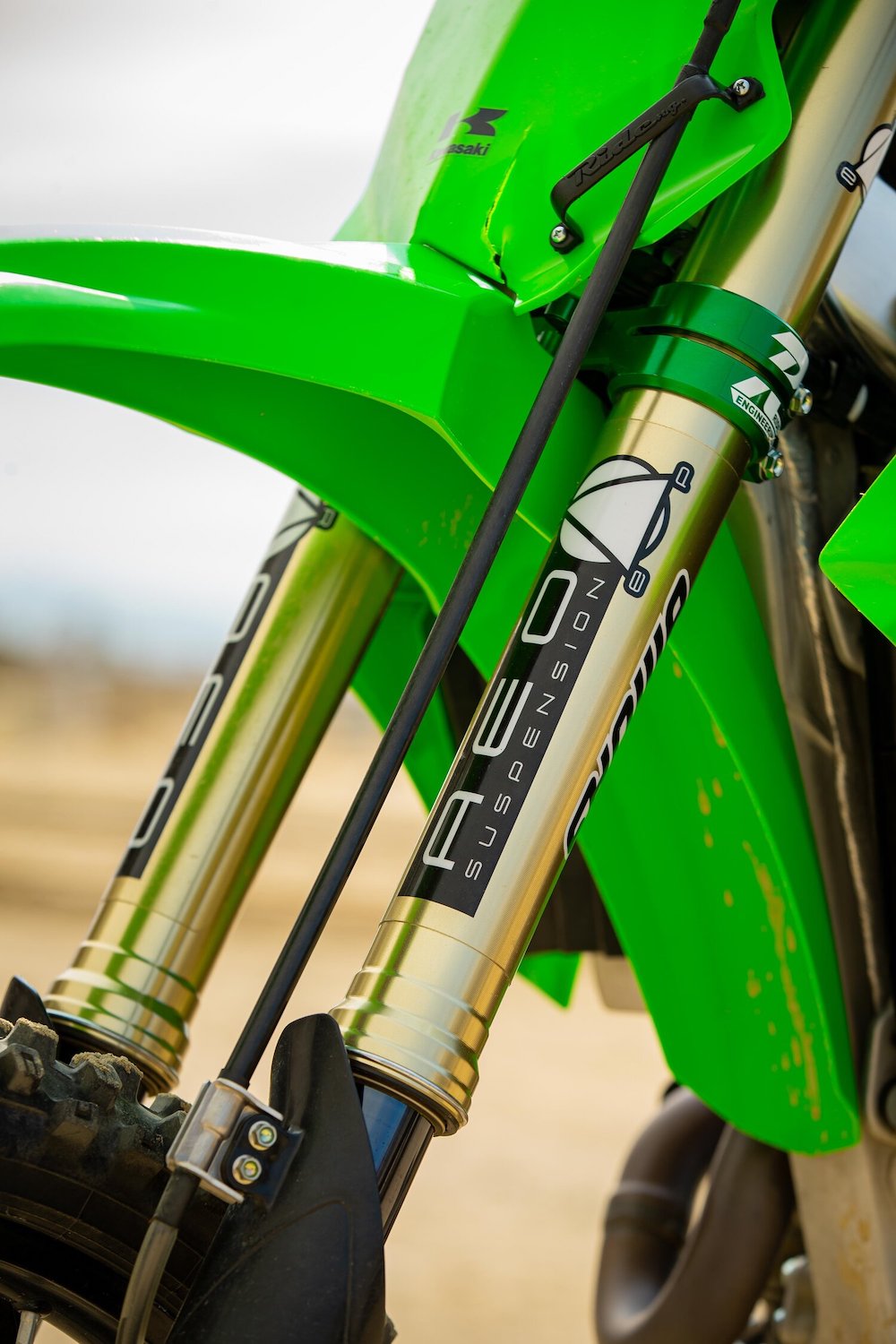 The stock valving on the KX450X was too soft for both off-road and MX riding for me. Although it was comfortable it didn’t have the hold up and performance that I wanted for both types of riding. After talking with Mark at AEO we decided to lean more towards an off-road setup and highlight what this bike was designed for. My first impression was exactly what I asked for, the valving had more hold up, a progressive feel throughout the stroke, and the added performance to push in rougher areas. I rode this set up at MX tracks, California desert and rocky single track in Arizona. If I was going to ride both moto and off-road I think I would stiffen the low-speed compression both front and rear to help the performance at the motocross track but not taking too much away from how well it works for trail riding. This setup really shined at everything I threw at it while trail riding, it soaked up all the rocks, small chop and square edges but had enough bottoming resistance that I could still hit bigger whoops and g-outs without completely hammering my back. www.repsuspension.com 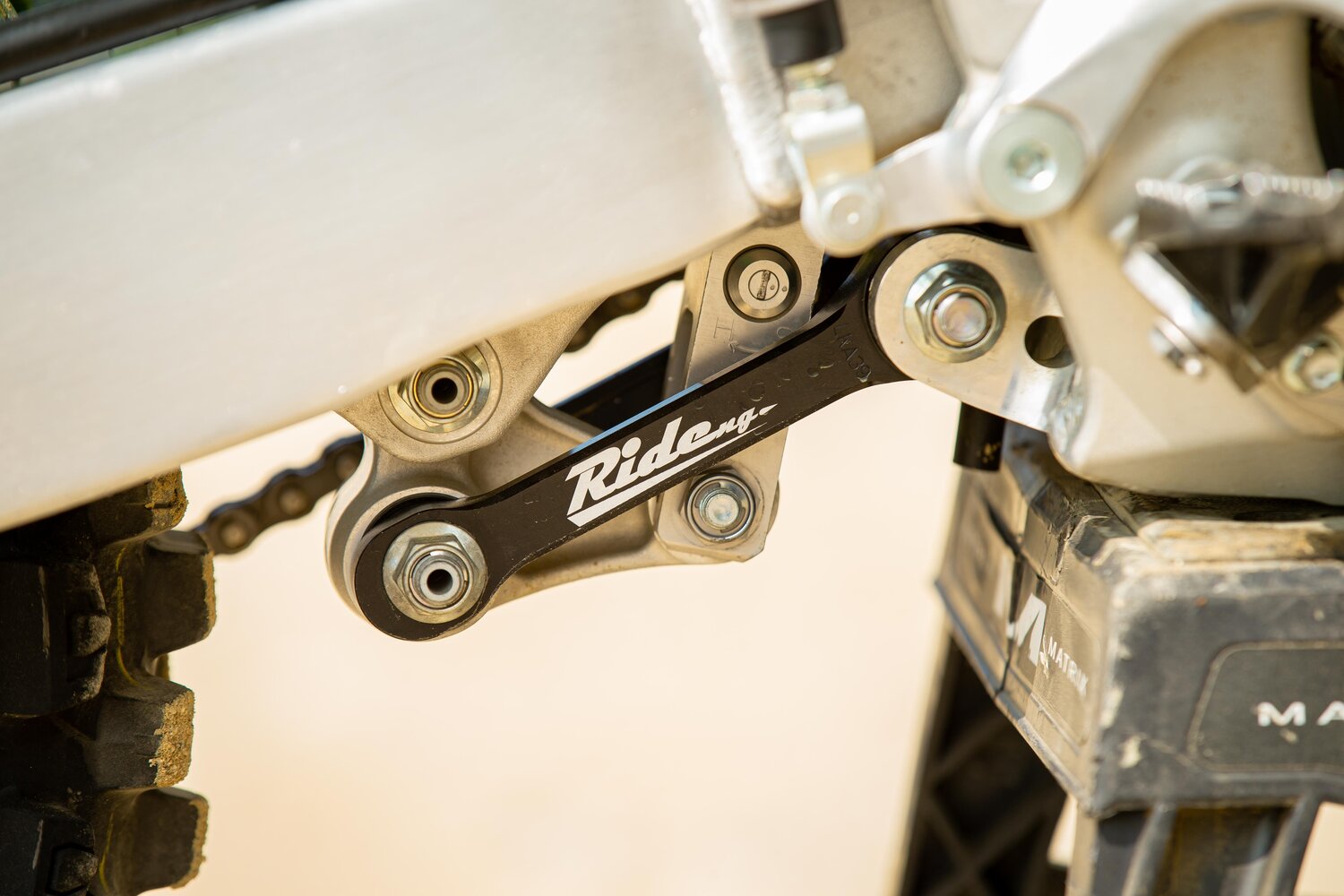 I used to put a different linkage pull rod on my Kawasaki’s back in the day, which was a couple generations of KX models ago, but always saw a big improvement with the ride attitude of the machine. With the stock link I found that the sweet spot for sag and balance, which was around 105-106mm with the link. With Ride Engineering’s link I tried the same sag numbers but realized the balance of the bike was off and too low in the back, so I bumped it up to 102mm to get the bike more balanced for what I prefer. Once the balance felt right, I noticed how well the bike drove through square edge bumps under acceleration, had an increase in rear wheel traction and helped keep the rear wheel planted to the ground. It helped in areas I hadn’t even noticed the KX450 was lacking with the stock link, so this was a surprise mod that I was not expecting too make that big of a change, but was one of the top mods that I did to the green machine. www.ride-engineering.com 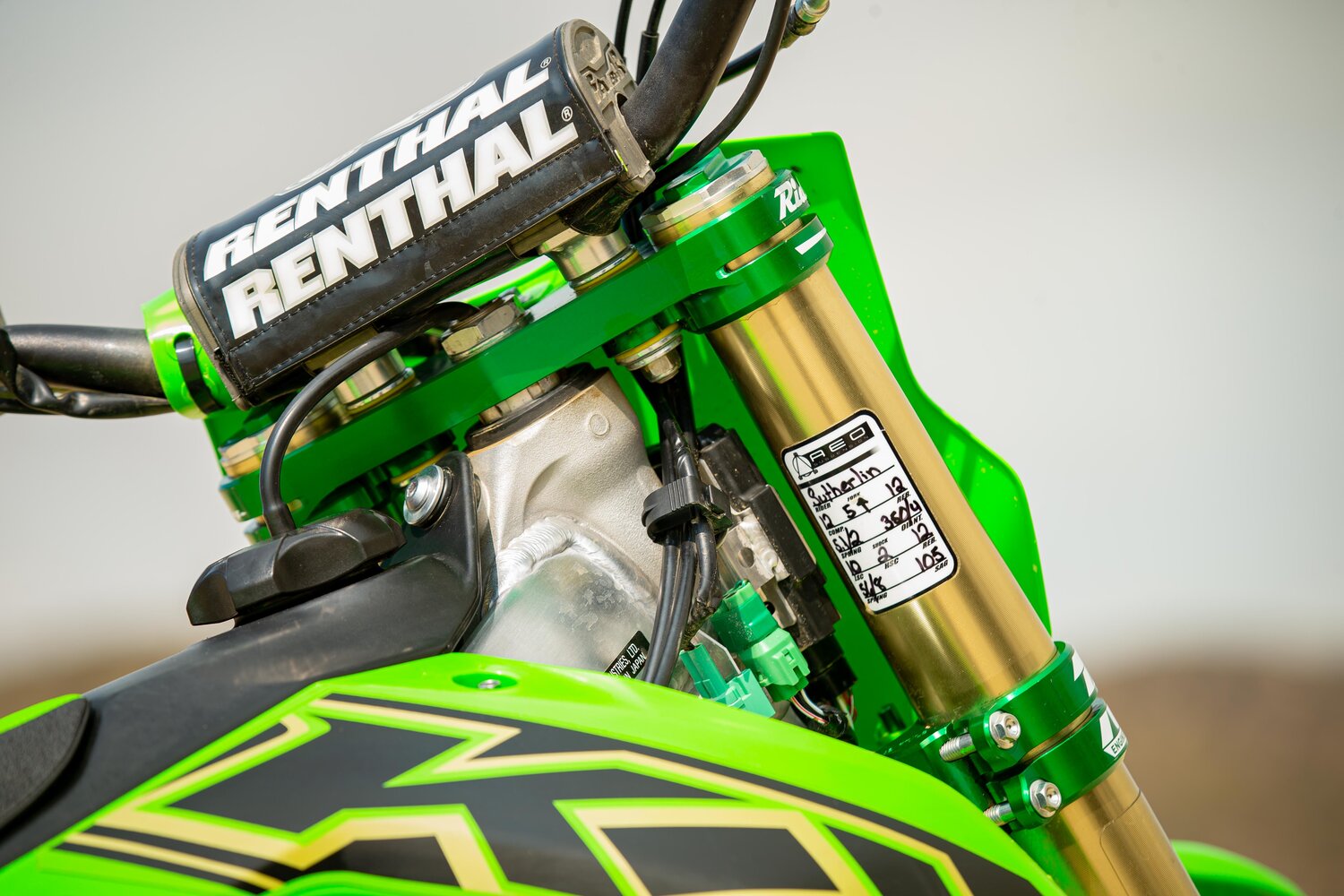 One of the first things that had me scratching my head with the Kawasaki was the vague feeling I was getting with the front end of the KX450X on lean angle. I felt like I would have traction then, bam, the front wheel was gone and I found myself picking myself up off the dirt. Adrian at Ride Engineering has been testing this clamp set up for awhile and asked me to give it a try and I figured this may be the ticket to stop finding myself lying in the dirt. The 22mm offset helped with front end traction that I was lacking with the stock clamp making it feel more planted and gave me more confidence in the front end anytime I was leaning the KX450X. I found the clamp to work well on single track trails and the flowing desert. My lean in while setting up for a turn was more controlled and seemed to help me change directions on the trail quicker and pick better lines. I did notice on faster high-speed bumps I was getting more feedback in the bars with the 22mm offset clamp than with the 23mm offset. I think going to the 22mm offset might increase rigidity a tad on square edge. When you make one area better sometimes it takes a little away from the other but I think it was a good improvement across the board and made the front end better for what I set the bike up for. www.ride-engineering.com 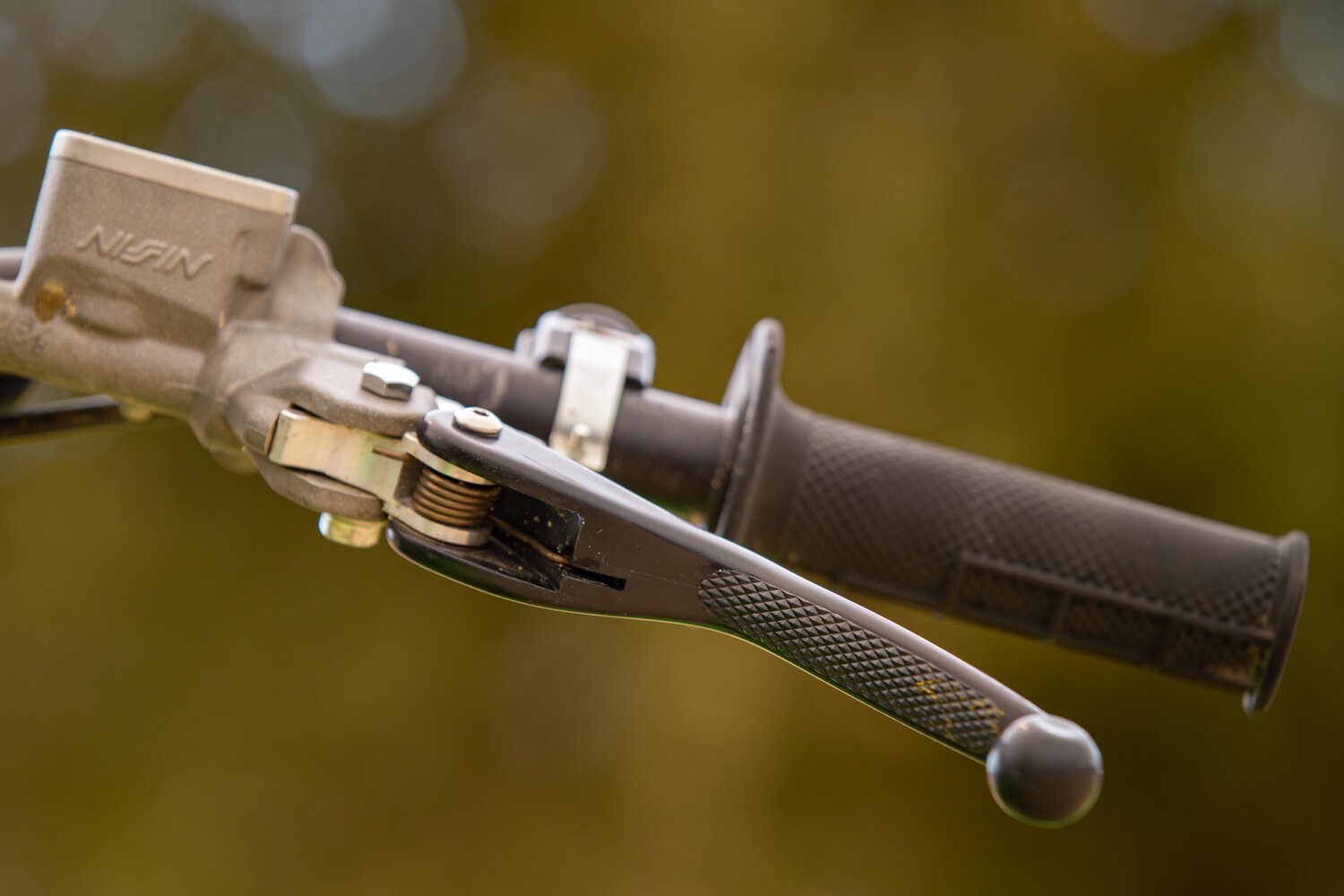 The simplest but most effective change to the KX450X was new ARC clutch and brake levers. In stock form the levers had me wondering if I ever used a clutch and front brake before, they’re oddly skinny and the engagement point was in a weird spot for me. I chose to use ARC Memlon levers over the aluminum for off-road. Bob over at ARC is a clutch and brake warlock giving you the options to make lever engagement and feel for ANYONE!. With his “Flip Chips” allowing you 6 different power ratios you really can make a personalized feel for you. Bob recommended the 16-17 ratio and it helped put the engagement a little closer to my fingers and improved the control while cornering. I know a lot of people think the Memlon front brake levers flex too much, but I really like the feel of the lever and don’t have a problem getting the KX450X to slow down for my thick ass. Plus, if you’re out trail riding and one of those pesky rocks comes out of nowhere, you might find yourself on the ground, the last thing you need is riding the rest of the day without a clutch or brake lever. www.arclevers.com 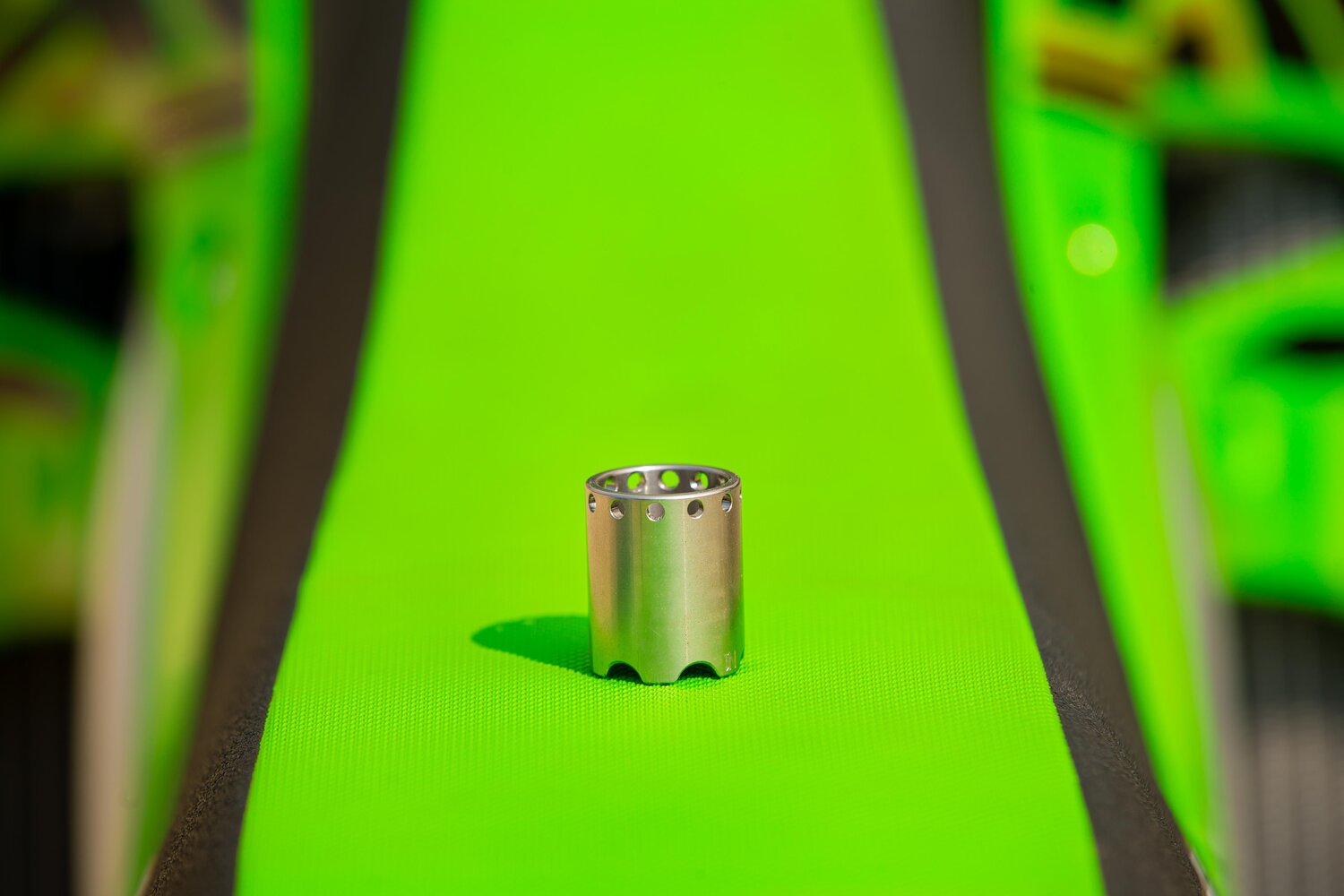 Calling all brake draggers!! I’ve used this product for the past few years on my KTM’s and it’s been a game changer. I have a lead foot and drag the brake a lot to help steer the bike while trail riding (editor’s note: as well as moto!). I noticed in the summer months brake fade on the tighter trails I rode with the added heat. But that was all solved with installing the new brake piston. With Jeff’s brake piston not only is it helping disperse heat through the face of the piston, the back also allows the brake system to hold almost 30cc more brake fluid. Whether you’re riding long trail rides, racing for multiple hours, or just like using that rear brake at the track, this brake piston is a must have on any model bike you have. www.braketech.com