I had this initial impression of the Akrapovic Evolution muffler system as I was doing a Racer X Garage Build on the 2022 Honda CR250R. After riding with the system for some time I came away with some notes that you may have not known about the beautiful system for the new generation CRF250R. The Evolution system is Akrapovic’s top of the line titanium racing system and once un-boxed you can tell this thing is a work of art. The welds are beautiful and to me the quality of the complete system is second to none. Installing the Akrapovic takes a little bit of finagling, but with some patience it does line up and fit well, as long as you leave most of the bolts loose when installing. At first glance on the bike the muffler looks bulky and odd shaped but I can tell you that the Evolution line system is anything but heavy. The new Akrapovic shape is more like a hexagon shape and has this dull, yet tough titanium finish to it. You will knock off close to two pounds with the Akrapovic’s full Evolution line and that weight can be felt on the track (more on that later). 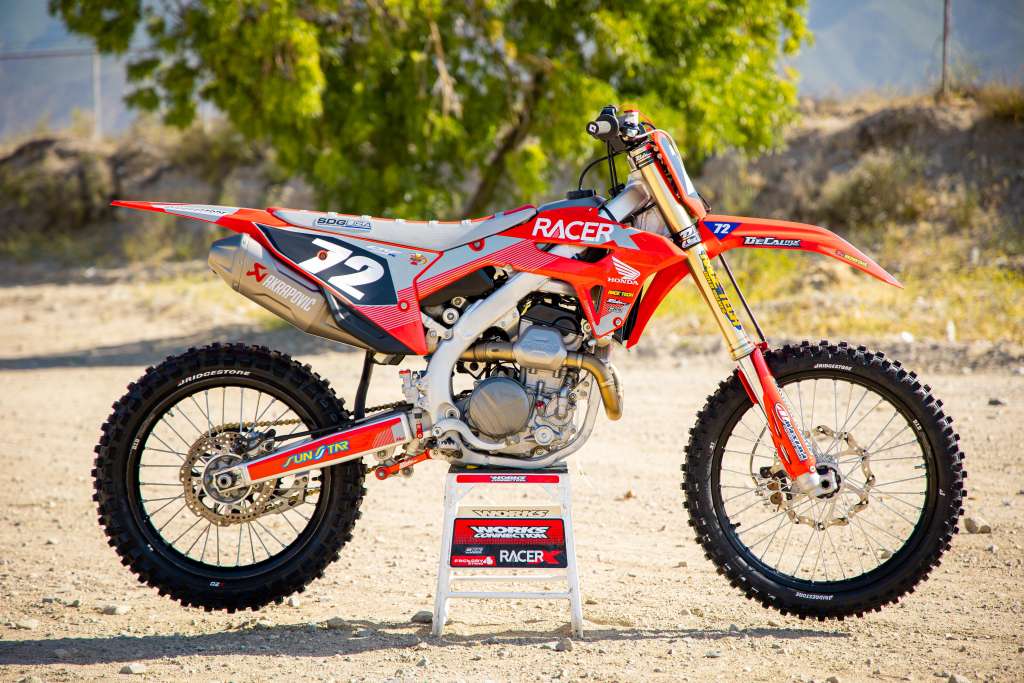 Once out on the track, the Akrapovic’s sound has a distinct, deeper sound to it, yet it keeps a quiet tone (similar to most Akrapovic’s I have tested). When getting on the track and rolling on the throttle, the 2022 CRF250R with the Akrapovic system installed distinctively has more roll on throttle meat than the stock system. The stock system will get you more rpm response but that is only felt at the crack of the throttle. The Akrapovic system will feel softer on initial rpm response but don’t let that fool you on the track. If the dirt is tilled up deep you will most definitely feel the Honda get on top of the soft dirt sooner as you accelerate out of the corner. The part you may miss a little is that blip of the throttle (crack) that the stock muffler does so well. Pulling power through the mid range is increased with the Akrapovic and each gear shift can be performed slightly later with the Evolution’s gained top end/over-rev. The Evolution system is not going to make this a fire breathing race machine, but it will enhance the mid-top end of your Honda and may give you that little more that you’re looking for if you’re riding flowy, longer tracks. This muffler doesn’t have the most low end hit out of the three mufflers that I have tried (Yoshimura, FMF, Akrapovic), but it does answer the call for that faster type of rider that needs more pulling power. That weight loss that you will get with the Akrapovic will get you a little easier side to side movement in corners as that weight loss is higher up on the bike so feeling it was noticeable on what I call “flop in” (or entrance in corners). 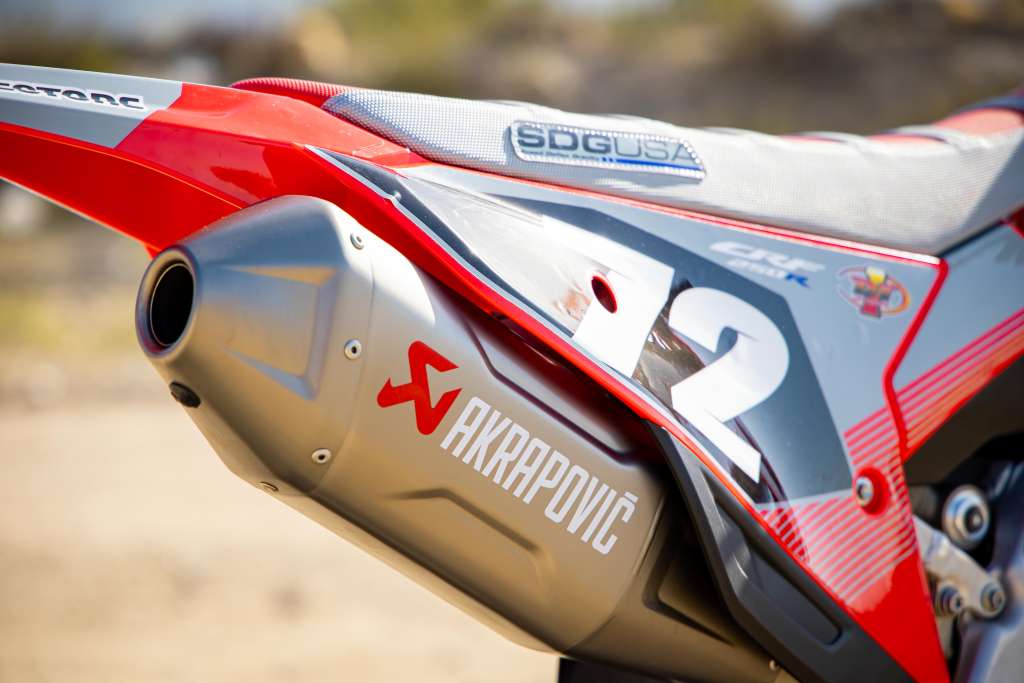 The reliability of the Akrapovic Evolution muffler is the class leader in how long the muffler packing lasts! Whatever the guys over at Akrapovic are using for muffler packing, they are doing it right because the packing inside the Evolution line lasts almost double than some of its competitors. I have ran almost 20 hours on the Evolution line and the pitch of muffler still sounds pleasant to the ear. The cost is a little steep at around 1600.00 but you will be able to actual feel the difference around the track even if you’re a weekend warrior. The looks may have to grow on you with the large muffler can and headpipe heat shield, but with anything new, change can take some time to grow on your when you’re on old! If you have any questions about the Akrapovic Evolution system for the Honda CRF250R please feel free to email me at kris@keeferinctesting.com at any time!